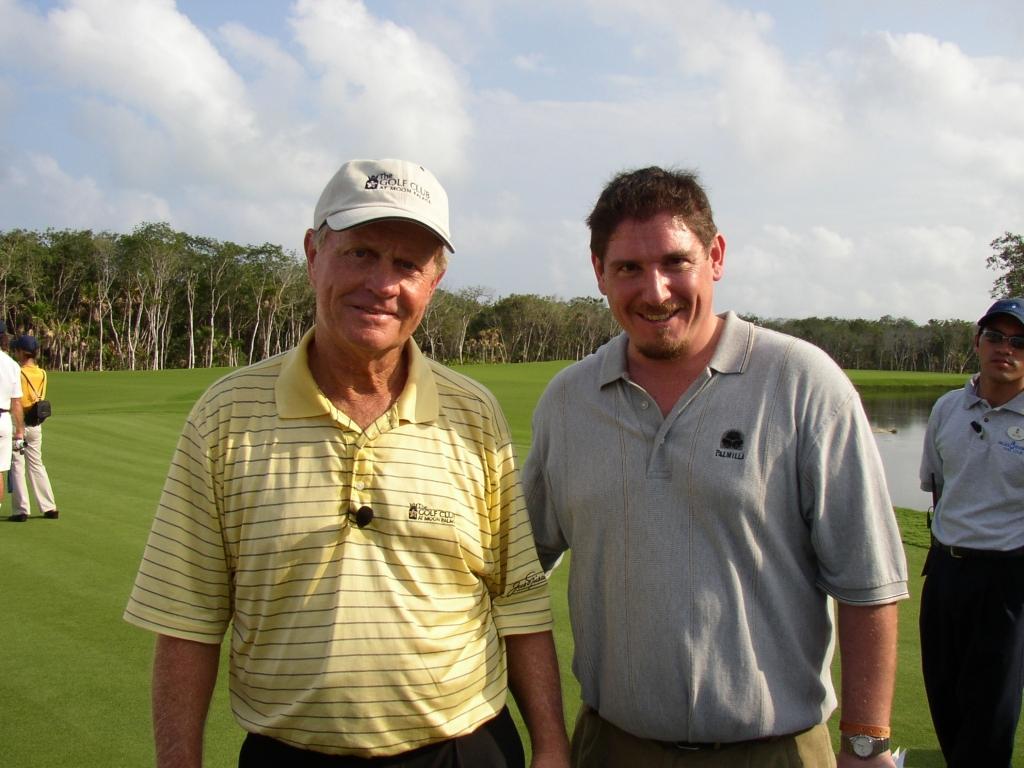 Your's truly with Jack Nicklaus, the greatest golfer to never shoot 59. The Golden Bear is in excellent company.

Every week of the season, the SI Golf Group has an online roundtable (which does not seem to welcome reader feedback or I would have written them directly), and this week the “experts” debated which was more impressive, Stuart Appleby becoming the fifth man and sixth player in PGA and LPGA Tour history to shoot 59 (and win, by the way) or for Yani Tseng to win her second Major of the season on the LPGA Tour, a feat that while impressive, is anything but uncommon – on either tour.

Given how much harder and rarer it is to shoot 59 than to win multiple Majors in one year, the answer is obvious – to anyone but SI’s golf gurus.

Almost overwhelmingly, they chose Tseng’s feat, which, after considering every other possible explanation, leads me to believe they are high.

Obviously which feat is more important is a subject of opinion, and as they say, “opinions are like a**holes – everyone’s got one.” After all, there are people whose opinion is that the earth is flat and that you can see Russia from Alaska. Simply having an opinion does not give it credibility.

In their support for this erratic argument, comments included:

“…but two majors in a season? That’s clearly more impressive, and important.” Jim Herre, Managing Editor, SI Golf Group. (Jim, sports are not important, they are entertainment. As far as more impressive, it is clearly not, and all golf history weighs in favor of the 59)

“To shoot a 59 is nuts, but it’s even more amazing that he did it to claim a one-shot win and earn himself a spot in the PGA Championship (and Kapalua and Augusta). That said, a second major in a season, on a course like Royal Birkdale, may top it.” David Dusek, Deputy Editor, Golf.com (Actually David, it may not. In fact, it clearly does not).

“I’m with Jim. I thought Appleby’s round and win were captivating. But it was one of those magical one-day things on a course where scores were low, low, low. You can’t compare that to winning two women’s majors in a season.” Gary Van Sickle, Senior Writer. (I’m sorry Gary, I missed the first part. Are you saying it was easy to shoot 59? That’s what it sounds like. If so, how come no one else did it? And if it was one of those “magical one-day” things, isn’t that what makes it so rare?)

Of all these comments, the only one that makes sense is Van Sickle’s closer, and not for the reason he thinks. It is true, you can’t compare them. They aren’t even close. Winning two Majors in a year in no way compares to shooting 59 in either rarity or difficulty. Appleby’s feat is the second rarest important accomplishment in golf after winning the Grand Slam. In fact, Appleby’s 59 is something that has now happened exactly as many times as the career Grand Slam on the PGA Tour. Tseng’s win-win is so commonplace that on the LPGA Tour it happens every few years. Without cracking a history book I can think of 16 men and women off the top of my head who have won multiple Majors in a singel year, more than 20 times between them, and I am sure there are several more, but I don’t have to go back very far (like 2008, for instance).

As many women have won two majors in a season since 1996 (Laura Davies, Juli Inkster, Karrie Webb, Annika Sorenstam and now Tseng) as men have shot 59 in Tour history, well over a century. Go back another five years and you have Meg Mallon doing the same thing in 1991, and then I stopped counting. How rare is a record that has fallen on average, once every 3 point something years since 1991?

In baseball parlance, shooting 59 is much rarer than pitching a perfect game, while winning two Majors in a season is more common, at least in our lifetimes, than the Yankees winning the World Series, something that never seems to end.

Again I want to be crystal clear: this is fact, not opinion.

Put the number 59 aside and consider exactly what Appleby did in historical terms: he shot the lowest score ever on the PGA or LPGA Tours, period, end of discussion.

On the other hand we have Tseng winning two Majors in the same season, which is neither the first or the most (Bobby Jones had four, Hogan three, Tiger 3 or 4 depending on your counting skills).

It is far from the first time on either tour. As I said, half a dozen women have done it recently, Padraig Harrington did it two years ago for the men, and Tiger’s done it four times by himself – one time less than the total number of guys who have shot 59. You don’t have to go back to Hogan and Snead and Jones to lose track of multiple Major winners. You don’t even have to go back to Nicklaus, Watson, and Trevino, all of whom accomplished it. In recent years Harrington, Tiger, Nick Faldo, Nick Price, and Mark O’Meara have all done what SI would like to believe is an extremely rare feat. This very quick glance at the history books reveals sixteen men and women who have won multiple majors in the same year, some more than once, and that is certainly not history’s grand total. Of these sixteen, exactly one – Annika Sorenstam – has ever shot 59.

I am an expert golf writer, but you don’t have to be to see that 59 is the far rarer – and thus more impressive – golf accomplishment. On the surface, it happens far less often. But that’s just 25% of the whole story. Here’s the other 75%.

Let’s assume that every professional golfer goes into every tournament with two goals, to shoot the lowest score they can and to win, which are certainly closely linked. Every tournament has four rounds but just one winner. Thus there are four times as many chances to shoot 59 as there are to win a tournament, Major or not. So while Tseng won two Majors in three attempts, she also failed to shoot 59 once, given twelve chances.

I think it is also fair to assume that anyone who wins any tournament, certainly a Major, is playing well, at or near their best – or “peaking” as we like to say. Tseng was presumably playing close to her best golf in winning Twp Majors, an accomplishment I certainly do not mean to belittle. But even at her best she couldn’t shoot 59, because it is really hard to do. So hard, that in many thousands of rounds played in men’s and women’s Majors by the self-selected group of the best golfers alive, no one has ever, even once, shot 59, Not the winner, not the loser, not the best that day, not on the calmest conditions ever at St Andrews. Never, ever. It is that hard to do.

Jack Nicklaus alone had more 50 rounds just in the Majors he won, at the top of his game, when he couldn’t break 60. Longtime world number one Tiger Woods has never played better than in the four years when he won multiple Majors, but in just those years in which he met or surpassed Tseng’s accomplishment, he failed to break 60 some 36 times – while playing his A game.

Every week on the PGA Tour there is a tournament, some easier than others, with over 100 of the world’s best players teeing it up, several hundred rounds per week, many thousands each year – Nicklaus alone played over a thousand professional rounds – and that 59 has been shot exactly five times on the PGA Tor. The number of opportunities to win multiple Majors in much smaller, a tiny fraction of the chances for shooting 59, yet it happens much more frequently. Because it is easier to do. Science, not opinion.

I’m no statistician, but eyeballing the actual facts, I’d guess that the odds of a PGA or LPGA player winning two or more Majors in season is at least 20 times greater than the chance of them shooting 59 in their career.

So hat’s off to you Mr. Appleby, you easily win this argument.

Finally, I would like to acknowledge the SI exceptions, writers Farrel Evans and Alan Shipnuck, the only ones with the lucidity to vote for Appleby. I was going to write courage, but how much courage does it take to choose the obvious right answer?

2 Responses to “Is Sports Illustrated Golf Group Smoking Dope in the Office?”