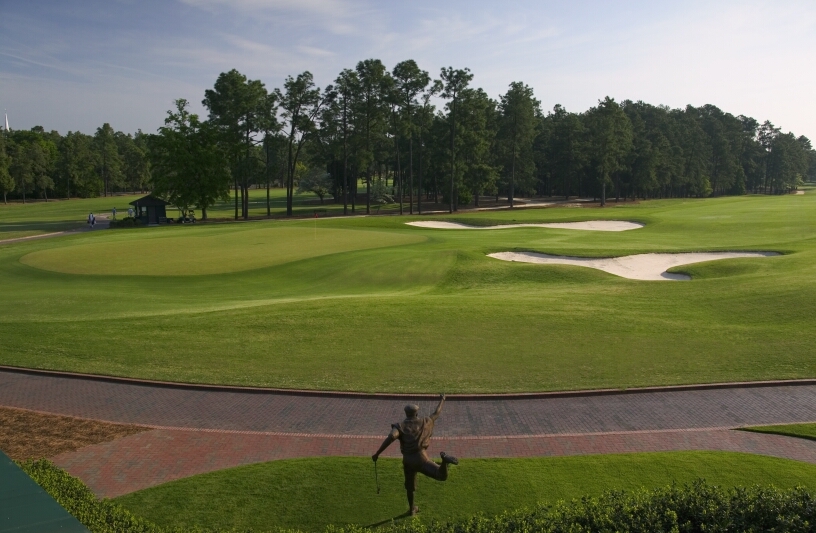 This bronze of late US Open Champion Payne Stewart overlooks the 18th of world famous Pinehurst Number Two, the only course ever to host the US Open, PGA Championship and Ryder Cup.

When I am not busy golfing, skiing or writing golf, ski and travel articles for magazines and newspapers, I have one other pretty important job, as far as journalism goes.

I write the most popular and widely read column on second home real estate in the English Language. My column is called “Life on Vacation,” and if you travel a lot you have probably read it, because people who travel a lot read USA Today, which also happens to be the number one newspaper in, you guessed it, the USA.

My column runs every Friday in USA Today, and each week I profile a destination that is popular as a place where people visit as tourists and to buy second homes. Sometimes it is a ski destination, like Aspen or Vail, sometimes a beach locale or the Caribbean, and sometimes a quiet lakefront escape for a summer cottage. But a lot of times it has to do with golf because golf is a huge driver of second home sales in the United States.

So occasionally I will highlight a golf destination that I think stands out as a second home locale, the kind of place I would buy a second home if they paid me more, and link you to my in depth coverage of the market to show what you can get and for how much.

To kick this off, I thought I would start with an American Classic, Pinehurst, NC.  To read more about the second home real estate market  in Pinehurst, click here for a link to my USA Today article.

This is especially fitting for a couple of reasons:

Pinehurst Resort has more golf courses than any single resort or club in the United States with eight 18-hole layouts, several of which are real standouts, including the famed Number Two, widely ranked the nation’s top ten courses and a US Open, PGA Championship and Ryder Cup venue. In 2014, Number Two will become the first venue in our nation’s history to host both the US Open and Women’s US Open in the same year.

The Village of Pinehurst and its neighbors have a lot more courses, more than 30 in the immediate vicinity, ranging from several Donald Ross classics outside the resort to modern designs by Nicklaus and company, and my favorite, the remarkable Tobacco Road by the late Mike Strantz.

The village itself is charming and atmospheric and is widely described as America’s St. Andrews, because along with the Scottish version, these are about the only two towns on earth that live and breathe golf. You cannot help but feel the golf history and electricity in the air. In both, golf is a very vital part of the town fabric, sits at the physical centers of the towns, and drives everything, from the hotels to golf antique and golf art stores and so on.

But for the potential second home owner, this is the best kept secret: both St. Andrews and Pinehurst have special deals for residents that beat the pants off any conventional club membership. Almost every residence within the village of Pinehurst, starting with $100,00 condos, qualifies for the local membership, less than $300 a month including unlimited play on seven of the eight courses (including Number 2), plus a members’ clubhouse, low guest fees, preferred tee times and lots of other activities. Considering a single round on Number Two costs this much for visitors, it is a spectacular deal, cheaper than almost any high-end country club – with just one course!

Finally it is worth noting that Pinehurst is one of the top four golf resort second home destinations  in the nation, along Pebble Beach, Kiawah Island and Whistling Straits and of these four, two of the villages were designed by my famous relatives, Frederick Law Olmsted Sr., and his son Junior, the most acclaimed landscape architects in history, whose body of work includes New York’s Central Park, dozens of other major city parks, the US Capital grounds in DC, numerous colleges and universities, including Tiger Woods’ stomping ground of Stamford, and of course, the quaint, park-like Village of Pinehurst.