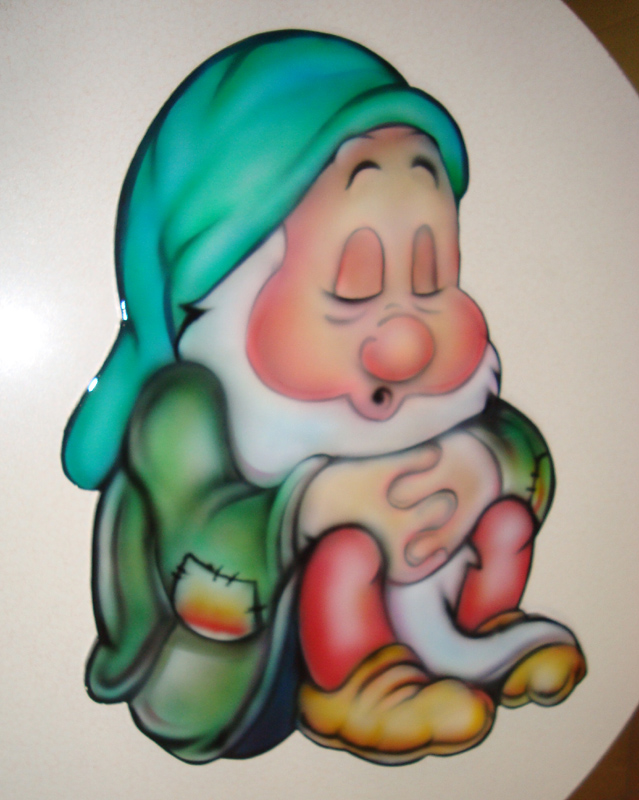 I found this handpainted image of Sleepy, one of the Seven Dwarfs, and for some reason it reminds me of Jim Furyk.

This has been a wacky year for golf, and it seems there are more good players with excuses why they did not win important tournaments than there are stories of how they won.

Tiger Woods, and his zero Majors this year comes to mind. It’s clearly not the knee (or neck) since that never stopped him in the past. With his family life in disarray and the subject of tabloid fodder, the once mentally toughest guy out there simply can’t seem to get his head in the game (but I’m still pulling for him).

In the same vein there is Sergio Garcia. Allegedly so distraught over failed puppy love that he can’t even be bothered to tee it up anymore, let alone win.

Mot famously we have “bunkergate” and Bubba Watson, who made a crucial mistake, even if an innocent mistake, to throw way his very good chance at his first career Major at the recent PGA Championship and pave the way for Martin Kaymer’s victory.

Today we have my favorite of all: Jim Furyk being DQ’d from the entire Barclays, the first of the FedEx Cup playoffs before the thing even started – for oversleeping.

It reminds me of Superbowl XXVII in 1991, when my team, the Buffalo Bills, lost one of the record three Superbowls they were destined to lose in quick succession at the quality epoch of their history. When the game started, superstar running back Thurman Thomas famously couldn’t play for the Bills because he couldn’t find his helmet. And he was a professional football player!

So Furyk’s name, for better or worse, will join this pantheon of lasting sports jokes, and he might even get a new nickname out of it. I’m pulling for Sleeeepy.

But the thing about Furyk is that we’ve all been there – or at least I have. As a frequent traveler, I have come to rely on the old cell phone alarm whereas once I carried a travel alarm clock. Sometimes you seem to plug it in but it never charges. That certainly happens with my iPhone, but then again, a lot of really crappy stuff happens when I use my iPhone and I have rattled on about that enough in recent weeks.

I guess the only difference is that when I am staying in halfway decent hotel, and my guess is the world number six Jim Furyk was not down at the youth hostel, and I have an early morning flight or something more important than breakfast to miss, I also get a wake up call. Just in case. After all, you don’t want to miss anything really important.