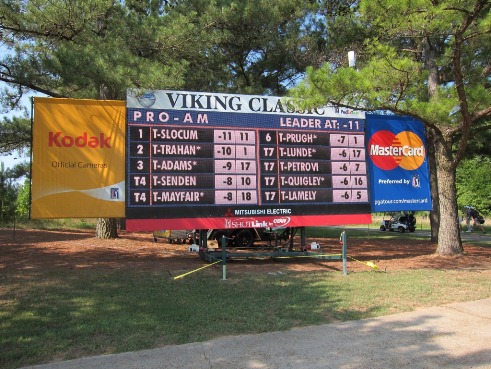 Four weeks ago I went to Jackson, Mississippi to play in the Pro-Am of the Viking Classic with one specific mission: to pick PGA Championship winner Keegan Bradley as my partner in the pro-am drawing.

Four weeks ago, despite having a breakthrough win and several strong finishes already in his rookie year (way more than can be said for Sergio or many more highly touted prospects), Keegan Bradley was almost entirely unknown among golf fans. If they knew him at all, it was for being the nephew of LPGA star Pat Bradley, rather than for his own surprising accomplishments.
So why did I want him as my pro-am partner?

Because very, very few folks (I can count them on one hand) from Vermont, where I live, have ever played on the PGA Tour, and Bradley played high school golf in the same town I ate dinner in last night, less than 20 minutes from my house, Woodstock, Vermont. I had the good fortune to meet our last local hero, Jeff Julian, before he passed away from Lou Gehrig’s disease, back when he was still a club pro at the Quechee Club and not a PGA Tour player.

Bradley also used to play with my good friend Dave McGrath, who helped coach our local high school team, knows all the people involved with golf locally, grew up in my backyard, and knows all the courses around here, so I figured we would have something to talk about, which is about the best thing you can have going for you in a pro-am. After all, I’ve played with some really famous, Top 10 in the world golfers and we had nothing to say (see my pro-am articles here, here, here, here, and here). I can almost guarantee I would have been the first amateur he got paired with ready to discuss the finer points of the wacky third hole at the John P. Larkin CC in Windsor. I wanted to ask him if he’d ever tried to drive the green.

First, I had to sell all my teammates on the idea that they should skip over much more famous players to let me take Bradley. Being gentlemen, they succumbed to my logic, and I figured we would all have a grand time, and it would be relatively easy to get him in the lottery, since few other teams would be gunning for him like we were.

Oh well. I still wish him the best of luck on Tour, and many more Majors!