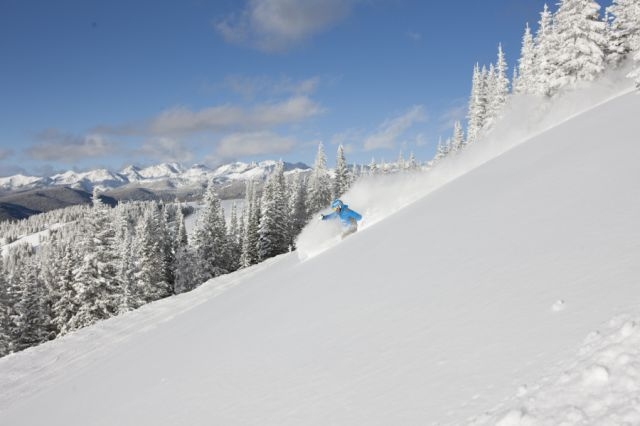 This could be you - if you try the season's new rockered skis. Courtesy of Jack Affleck/Vail Resort

In a sports equipment world full of techno hype and faux-engineering, skiers are about to discover the real thing – a true paradigm shift on store shelves.

For historical perspective, the impact of the “shaped” ski in the mid-nineties cannot be underestimated. This technological breakthrough, also known as the parabolic or hourglass shape, where the middle of the ski is significantly narrower than the tip and tail, encouraging turning/carving, and was one important factor in saving the entire ski industry. In a sport notorious for a long learning curve and ability plateaus, where skiers often found themselves stuck at intermediate or advanced intermediate ability for years, the shaped ski solved both problems. Coupled with new teaching methods developed especially for the skis, parabolics let never-evers make top to bottom solo runs in just one or two days, and helped longtime skiers jump an entire skill level or two overnight. Not coincidentally, skiers and new skiers flocked back the slopes and skiing has enjoyed a renaissance ever since.

In short, the shaped ski was magic, a technological game changer unlike anything else in recreational sports, far more impactful than the cavity back iron in golf or even the fiberglass racquet in tennis.

For winter 2010-20011, the ski industry is delivering another “why didn’t they think of this before” revolution, the rockered ski, and it is going to be a doozy.

By most accounts rockered technology was introduced around 2003, but like most such changes it took a few years to get perfect and go mainstream. This winter it is both perfect and mainstream – there are over 150 models from every major manufacturer, and some, like venerable K2, have so embraced the concept that they are making nothing but rockered skis. 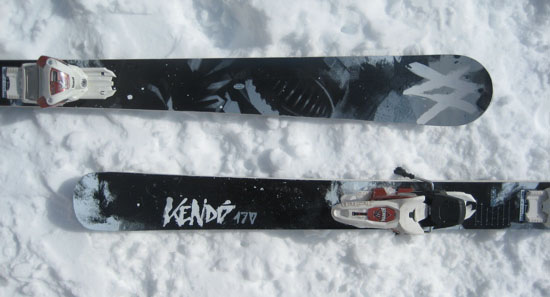 Volkl's Kendos are one of many top performing new models for winter 2010-2011.

So what is it and what does it do?

While shape referred to the edges of the ski, rocker is found on the bottom (and thus also the top). Traditional skis have long been “cambered,” meaning that with no weight on them the fronts and backs touch the ground but not the middle – they bow upward. Rocker is exactly the reverse – the tips and tails curve upwards, so from the side the profile resembles a dish (this is greatly exaggerated). This has two great advantages: the ski is much more maneuverable and it performs better – much better – in powder, with greatly increased float. No more trying to keep the tips up, since the ski does that itself.

The shaped ski achieved the goal of being easier to turn. This led away from the traditional categories of slalom, downhill, GS, mogul and so on to the all-mountain or all-condition ski, which was definitely more versatile, but in reality never lived up to its name – until now, until rocker.