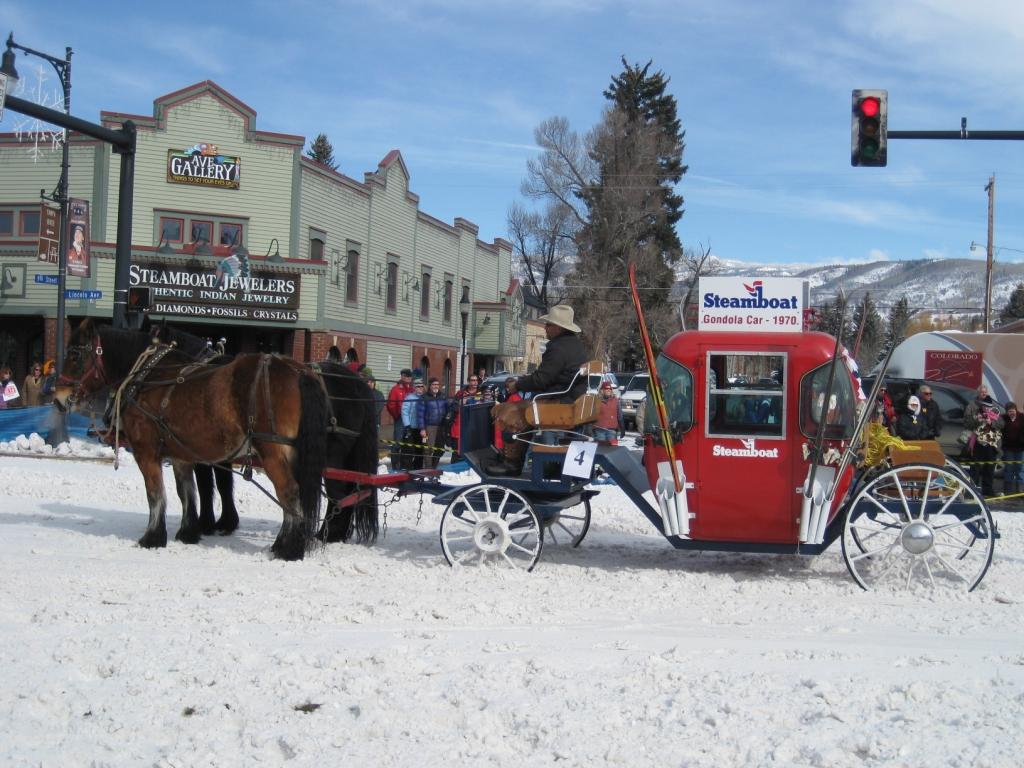 No, it is not rush hour in Steamboat, but rather the town's funky Winter Carnival parade, where locals will make floats - or in this case stagecoaches - out of almost anything, including an old ski resort gondola.

Are Olympians born or made? In Steamboat Springs, Colorado, the answer is both.

The world’s attention may be riveted on Vancouver right now during the Winter Olympic Games, but just four years ago Italy’s Turin was the star, and by next week, attention will have shifted to Sochi, Russia, site of the 2014 games. But no matter where the Winter Olympics are found, one thing is constant: there will be a lot of folks there from Steamboat Springs, Colorado.

Steamboat has an incredible reputation for producing more Winter Olympic athletes than any other town or city in the US, despite its minuscule size. This year it sent 17 natives to the games, in just about every imaginable discipline. It was also the chosen final training ground of the US Men’s and Women’s Mogul Teams, including gold medalist Hannah Kearney, so at Steamboat’s dramatic Olympic send off event, there were about 30 athletes on the stage headed to Vancouver. Take that Whistler.

But while this Olympic spirit is incredible and impressive, my interest in Steamboat was as a visiting skier. As I reported earlier in my blog on Crested Butte, after years of covering skiing in addition to golf, 2010 is my year to hit the major resorts I had somehow missed in my travels, and Steamboat is one of those. What I found was a wonderful place, a real town with real spirit and community, plus a hefty dose of old West flair thrown in, along with something missing in most big ski resorts these days: affordability, a Pabst Blue Ribbon inspired après scene, and a general user-friendly vibe that does not require fur coast or one price European ski suits. 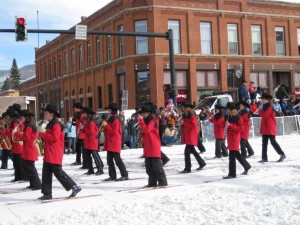 The fact that Steamboat's High School marching band does its thing on skis and in cowboy hats pretty much captures the essence of the town.

I had a chance to ski with two-time Olympian and former US Ski Team star Chad Fleischer, who owns a wonderful ski shop here. Fleischer grew up in Vail, the 800-pound gorilla of Colorado resorts, and while he admits that Vail has more and better terrain than Steamboat, he moved here because it was the kid of place he wanted to raise his kids. That pretty much says it all, and helps explain the town’s Olympian factory. Its home to one of the nation’s oldest ski clubs, the not for profit Steamboat Springs Winter Sports Club, which even has its own mountain, Howelsen Hill, right in downtown, complete with full-size jumping facilities. Basically everyone interested in skiing here sends their kids to the SSWSC and Howelsen for world class coaching form a tender age, producing future champions.

For us mere mortals, the skiing is found at the much larger Steamboat ski resort, which thanks to a unique location in northern Colorado (most other major resorts lay well south) is on the border between the Colorado storms and the Utah/Wyoming storms, and as a result catches both and gets among the most snow in the state, and more importantly, the driest. This is such an amazing metrological phenomenon here that the resort actually trademarked the phrase “champagne powder,” and while this description of light, deep powder gets thrown around a lot (especially in rival Utah!), it really means Steamboat. Not to be outdone, the town of Steamboat Springs trademarked its own catchphrase, and an accurate one: “Ski Town, USA.”

Here’s the bottom line. Steamboat is not an overly challenging mountain, and even its double black terrain, and there is not too much, is reasonable for an advanced skier, unlike the double blacks at Jackson, Crested Butte or Squawk. There are a lot of cruisers, and a lot of great snow. Steamboat’s signature is its tree skiing, and it has expansive glades for all abilities. If you are a devoted blue skier who has always been afraid of the trees, this is the place to try them, with low angle, well spaced, soft pines. For me, I found run after run of unbroken boot deep powder in glades like the Closest, a long run that is half pines, than crosses a catwalk and drops into equaling enticing Aspens. On a good powder day, I literally spent the entire day doing this run over and over, rarely seeing another skier and without ever crossing my tracks. 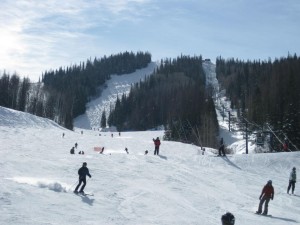 Tree skiing is Steamboat's trademark, and the best terrain isn't the big white strips, but rather the forest between. 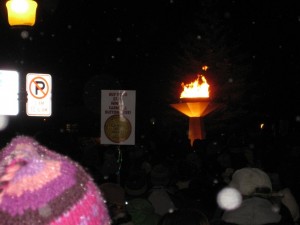 No it's not Vancouver's Olympic Torch, but rather the one Steamboat Springs keeps lit throughout the Games to honor the many Olympians it sends every four winters.

The other big bonuses are reasonable prices, plenty of eating and drinking options, virtually zero lift lines, amazingly empty slopes and both a solid ski resort base area with plenty to do and a wonderful western town just minutes down the road. There is also a major sno-cat skiing operator, Steamboat Powder Cats, run right out of the base village, and unique offsite activities include dog sledding and several very popular hot springs. Extreme skiers might no make Steamboat their first pick, but for everyone else, and especially families, it is hard to beat. 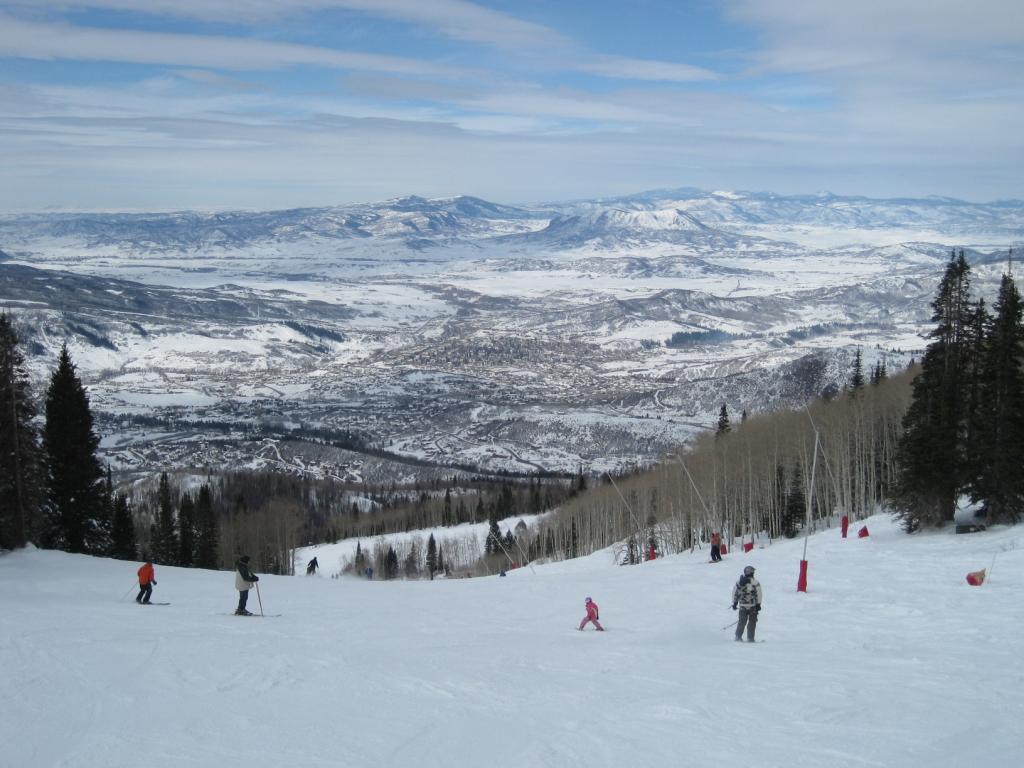 The views from on the slopes of the Steamboat Resort are not too bad either.