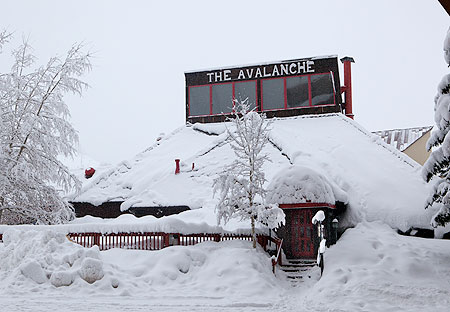 How much does the Avalanche, at the base of Crested Butte Mountain Resort, rock? A lot!

As a golfer, I love the 19th hole, and from the Jigger Inn of St. Andrews to the Tap Room overlooking the 18th a Pebble Beach, there are some unforgettable places to have a post round drink. But overall, golf cannot hold a handle to skiing when it comes to the bar scene. Most golf courses have one or two après options – most ski resorts have dozens. A small town like Aspen or Vail has more watering holes than there are pubs in St. Andrews – a city with major University – and that is a scary thought.

There is no list of great après ski bars that is going to be complete, and these places run the gamut from serious hard charging watering holes to restaurants with great bar food where drinks are bit of an afterthought. They can be on mountain, at the base of the mountain or in a mountain town. Many have happy hours, something you will just about never find in a golf clubhouse, and it is equally unlikely that the drink of the day at a golf club is ever going to be red bull and vodka.

I have two rules that apply equally to golf 19th holes and après ski bars. First, if you need – or want – to change out of your sports clothes to go there, it does not qualify. It may be a great bar, but it is just a bar. Secondly, if the menu has the words “kobe slider,” it is not a place you will find me hanging out. Nachos, yes. Chicken wings, yes. I can even live with sushi. But the only sliders that are acceptable come from White Castle, and when I find the après ski bar that serves those, I will move in.

In the course of covering ski travel, I have been to virtually every major destination ski resort in this country, plus plenty more worldwide, but in addition to my own extensive hands on research, I have consulted with dozens of ski industry insiders, people who actually live in these towns and party hard, to compile a list of can’t miss après ski hotspots. Every single one of these has either been personally tested by yours truly, or comes highly recommended by someone I know, trust and have gone drinking with. Recently I gave a “ski resort personality test” to help you pick your perfect destination. Now I tell you where to drink. So without further adieu, here is my highly unscientific and incomplete list of places you should not miss on your next ski trip.

Gold Pan Bar, Breckenridge, CO: Why do I love this place? This is why: when Prohibition was introduced, the folks in Breckenridge thought they were still the Wild West, and not only chose to ignore the new law, but basically double dared the Feds to come to their bad ass mining town and try and enforce it. The Feds wisely chose to leave Breck alone, and the Gold Pan has been in continuous operation for more than a century and a half – and still does specials on Pabst Blue Ribbon.

The Little Nell, Aspen, CO: This is the polar opposite of the Gold Pan, and while the Little Nell is a fantastic hotel with fantastic service and food, then main reason to go to this après bar is to make fun of people, mostly people who haven’t actually gone skiing but still got dressed up in hideous designer ski outfits just to go to the bar. You will know them when you see them. And you will laugh while you fork over twenty bucks for as lychee martini. You get bonus points for carrying a small dog with you.

Los Amigos, Vail, CO: Okay it helps if you are a little mean spirited, because the appeal here is not the margaritas, which are fine, but rather than never ending series of crashes you get to watch on Pepi’s Face, short steep descent at the base of Vail that never fails to catch visiting skiers unaware. So sit out on the deck in the sun, grab a pitcher of margs, and watch the carnage. Head over heels wipeouts elicit the biggest cheers.

The Wobbly Barn, Killington, VT: Like that movie Hot Tub Time Machine, little has changed at the Wobbly Barn over the past few decades, which makes it a classic. It is cavernous, rowdy and eastern – Vermont does not have the powder the Rockies get, but has lots of New Yorkers, which means it gets crowded with people who know how to party.

The Minturn Saloon, Minturn, CO: As far off the beaten track as a place can be and still be après ski, this bar is exclusively for those who tackle the infamous Minturn Mile, an out of bounds off piste run from the top of Vail to the old mining town of Minturn. It helps to have a local show you where the trail is, but despite all the hype, the skiing itself is not especially difficult (strong intermediate and above). You zip down a chute style run through the woods for the mile – several miles actually – before arriving at the edge of “downtown” Minturn and hoofing it the saloon. Stick to beer, even though they are known for their watered down margaritas.

Million Dollar Cowboy Bar, Jackson, WY. The bar stools have saddles on them. What else do I need to say?

Montanya Distillery, Silverton, CO: This offbeat pick comes from a friend and renowned ski writer who lives in nearby Durango. First off, if you are doing any après ski in Silverton, CO, the most extreme mountain resort in the country, you are already throwing it down and someone should buy you a drink. But a real life distillery – specializing in rum no less! – in an antique Victorian home? Get out, that’s too good to be true!

Avalanche Bar & Grill, Crested Butte, CO: You know you are in Crested Butte by the number of skiers still wearing spine protection while doing shots. Hardcore ski crowd aside, this is the quintessential après experience: old, unchanged, lots of wood, drafts, people drinking whisky, fair prices, pizza, sports on TV. No chocolate martinis and the epitome of “no kobe sliders.”

The Shed, Stowe, VT: First, they make their own beer. Second, they serve samplers of it on old skis. Who needs third?