Augusta National Golf Club, host of the Masters, is devoted to perfection. Every inch is tended and groomed, coaxed to a standard befitting a theologian’s dream of heaven more than a playground for mere golfers.

By contrast, the Pinehurst Resort, in restoring its championship No. 2 course that will host the men’s and women’s 2014 U.S. Opens in consecutive weeks, has embraced imperfection and uncertainty. 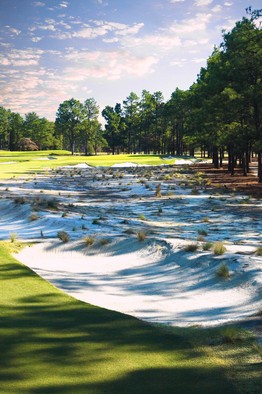 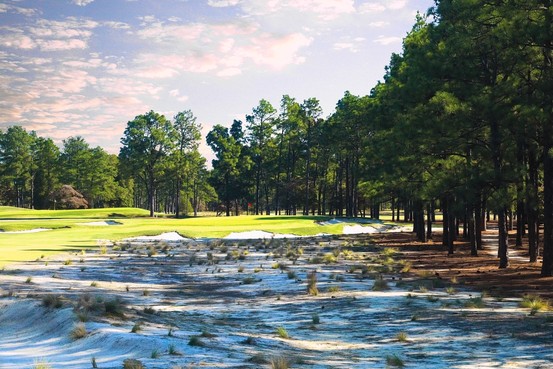 Pinehurst, the resort village created in the 1890s in a desolate region of North Carolina, occupies a unique place in American golf. It was one of the country’s first golf destinations, a public playground for a game largely reserved at the time to private clubs. Frederick Law Olmsted’s firm designed the town on 6,000 acres in a denuded area of former pine forests referred to as the Great Carolina Desert.

Donald Ross, a native of Dornoch in the Scottish Highlands who became America’s most prolific golf architect of the 20th century, laid out Pinehurst’s original 18-hole No. 2 course in 1907. He settled on the current routing in 1935, and continued to tinker with the course until his death in 1948.

Ross’s courses are often stereotyped as having raised, crowned greens with falloffs to short-grassed chipping areas—true of Pinehurst No. 2—but his design portfolio is far more varied than that. He took what the land gave him, and recognized that the great diversity of soil conditions in the U.S. dictated a variety of approaches to the game.

In Pinehurst, however, he found something that reminded him of home. The rolling sandy terrain struck Ross as an inland version of his hometown, which boasts one of the world’s great seaside links. “Sand is the ideal soil for a golf course,” he wrote in 1935, “and here at Pinehurst we have an especially suitable sandy soil…. [We] are able to handle the greens and approaches in ways that would otherwise not be possible, such as the creation of hollows and contouring that would present impossible drainage problems in anything but a natural sandy soil.”

The No. 2 course at Pinehurst is Ross’s masterwork. From his home alongside what is now the course’s third hole, he observed play over the grounds for 30 years before building its trademark greens with their inverted-bowl shapes that slough off indifferent approach shots. The strategic heart of the course is in those greens, which are best approached from specific angles. The fairways are meant to be wide, and the greens almost always offer a way to bounce the ball onto the surface. This makes Pinehurst No. 2 that rare course that can hold a major championship, yet be played and enjoyed by the average golfer.

After the 1960s, however, Pinehurst was sold to a company whose primary interest was in real-estate development, and No. 2 entered a period of misguided renovation. The sandy areas that lined the fairways were replaced with Bermuda-grass rough, and over the next few decades that rough came more and more into play. Fairways that were once generous, in keeping with Ross’s belief that a good golf hole should give the weaker golfer a way to play around hazards at the cost of a stroke, were tightened considerably. And the long rough not only eliminated recovery shots but kept the errant drive from rolling into more interesting jeopardy in the pines.

The current ownership hired golf architects Bill Coore and Ben Crenshaw to restore No. 2, work they completed this year. They’re known for creating highly regarded courses like Bandon Trails in Oregon and Sand Hills in Nebraska that seem to rise organically out of the natural landscape.

“The reputation of Pinehurst was established in its natural state,” said Coore. “Once you got off the fairways, it was wiregrass and hardpack sand. You might roll up against the wiregrass, or you might reach the pine needles, or you might have a clear, firm lie. We wanted to restore the uncertainty.”

Coore and Crenshaw studied old photographs and aerials of the course taken in the 1940s. They removed untold acres of Bermuda sod and replaced it with…nothing.

“When you remove the grass, areas expose themselves as sandy wasteland, firmer, and evolution takes over,” Crenshaw told me.

Some soft white sand and pine straw were scattered over the waste areas, awaiting the winds that will put them where they will. Eighty thousand wiregrass plants, whose wispy tufts are more an impediment than an obstruction, were planted by hand in a largely random pattern, though concentrated more heavily alongside the landing areas for the professionals’ drives.

The putting surfaces, and the tricky contours on and around them, create enough problems for the finest professionals.

“Pinehurst has always been the pinnacle of thinking around the greens,” said Crenshaw, a two-time Masters champion and celebrated putter when on the Tour. “It offers the most fascinating set of decisions you’ll ever see…. You can always put the club on the ball; it’s a question of where to land it and what happens then. When you’re caught with three or four different options, it creates confusion.”

Avoiding that confusion takes planning and strategy. “So much is based on the strategy of wide fairways,” Coore told me. “But Pinehurst, particularly during the 2005 [U.S.] Open, the fairways got so narrow. When you read everything Ross has written, you see you need latitude to make decisions—the goal wasn’t to hit the fairways, it was to hit the right part of the fairways.”

Coore and Crenshaw have restored that width and latitude. The restoration was undertaken with the white-tee player in mind, though the U.S. Golf Association, which runs the Open, was involved and is on board with the changes.

And if a U.S. Open is decided by the random luck of one player’s bounce into the wiregrass while another’s errors go unpunished, so be it.

“I think it was [Alister] MacKenzie who said, ‘If they ever try to legislate luck out of the game, we’re dead,’ ” Crenshaw said. And Crenshaw himself once wrote, “Golf would not be a mystery if there were not instances of two different outcomes on the same shot.”