The Mesquite Chamber of Commerce, proud of their year-round golf facilities, would probably rather I not mention that the second round of the Media Classic was played in temperatures in the mid-forties with significant wind gusts.  The best thing that can be said about the conditions is that they weren’t as bad as I’d feared.

Fortunately, the golf course was well worth the effort to brave the elements.

Falcon Ridge Golf Course is a public facility located in the hills above Mesquite Boulevard, the town’s main drag.  The course winds through canyons and alongside crags, with dramatic elevation changes and scenery to match.

It is not a long golf course – less than 6600 from the back tees, a touch under 6000 from the middle – but it has more than enough challenge for players at any level.  It has short holes and long, some narrow fairways and some exceptionally broad ones, spectacular downhill tee shots and a smattering of uphill blind ones.

Few courses anywhere in the world have as visually striking a stretch of holes as the 12th through 15th at Falcon Ridge.

It begins with an unforgettable par-5, starting on a shelf high above a fairway bordered by a pond and bunker on the left and stony face to the right.  A good drive, when it finally touches down after a flight that seems to last several minutes, leaves a decision about whether to try to fly over the long water hazard, or to play safely to the ribbon of fairway on its left.  The green is only 24 yards deep, but is canted to accept the gambling approach. 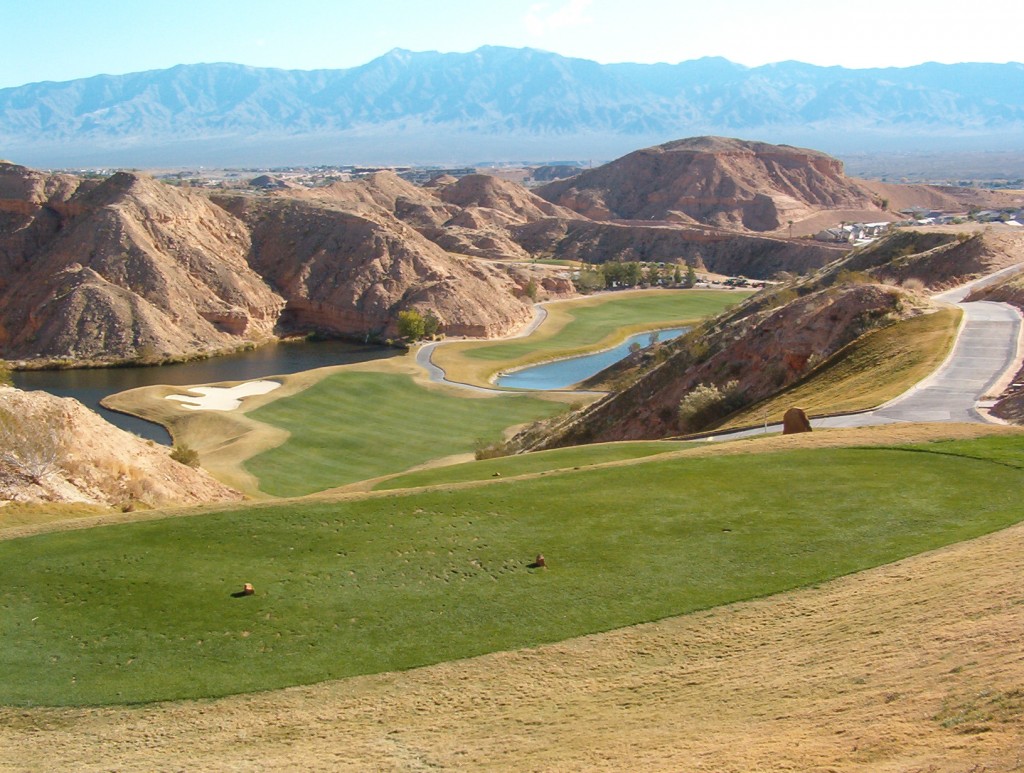 The spectacular view from the 12th tee.

The 13th calls for an uphill drive to a two-level fairway, with a wall of rock on the right.  Directional poles mark the preferred line on this and the other blind tee shots.  After cresting the hill, the approach on this 435-yard par-four is steeply down, to a green guarded in front by a pond and bunker, with a bailout area on the right for safety. 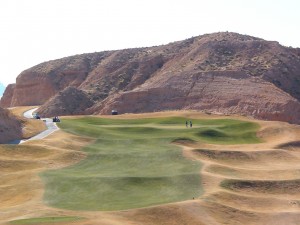 The 15th fairway ripples its way up to a hillside green.

What’s next?  A long downhill par-3, playing 202 from the back tees, 184 from the middle, to a very deep green, followed by a broad uphill par-four with a many-plateau’d fairway, rising in ripples to the putting surface.  There are no bunkers anywhere on the 15th, and none are needed to give the hole visual or strategic interest.

Falcon Ridge was designed by Kelby Hughes and Cresent Hardy, and opened in 2004.  The front nine plays much easier than the back, beginning gently with a downhill dogleg par-5, a short 3, and two short par-4s, allowing you to get off to a good scoring start while warming up to face the challenge to come.  The front nine is fully 500 yards shorter than the back, but has nearly as many amazing vistas.

At times, Falcon Ridge can seem almost too spectacular, too much like one of those “World’s Toughest Golf Holes” calendars.  It is an unconventional golf course, one that is unlikely to remind you of any you’ve played.  It’s a don’t-miss stop for anyone coming to Mesquite and vicinity.