“Golfing” and “gaming” are two of my least favorite words in the American vernacular.  Don’t misunderstand me, I heartily enjoy both activities; I just prefer to use their proper names, “playing golf” and “gambling.”

Whatever terms you use, those two are the red desert rocks on which the vacation town of Mesquite, Nevada, is built.

Mesquite stands near the border conjunction of Nevada, Arizona, and Utah.  It’s about eighty miles northeast of Las Vegas, and an hour southwest of St. George, Utah.  It is located alongside the Virgin River, and was part of the Old Spanish Trail and the Mormon Road in the 19th century.  Flash floods wiped out the first efforts at settlement and irrigation; the city – initially called Mesquite Flats – was permanently established in 1894 when six Mormon families moved from nearby Bunkerville and rebuilt the watering canals.

It was an agricultural town for much of the twentieth century, first producing raisins, later hosting dairy farms.  When I-15 was completed in the early 1970s, Mesquite became a tourist destination with its legal casinos drawing gamblers from neighboring states.

The first golf course in Mesquite, the Palms Course, opened in 1990.  Six others have followed in the years since, and golf has become an integral part of the marketing of Mesquite.  It is host to the nationally-televised long-drive championships, has been featured on GolfChannel’s “The Big Break,” and holds the annual Mesquite Amateur, one of the largest handicap events in the world with up to 800 golfers competing in a 54-hole stroke play tournament to qualify for an 18-hole championship round, with net and gross flights.

Mesquite offers itself as a budget alternative to such traditional vacation magnets as Las Vegas, Scottsdale, and Palm Springs.  Golf and hotel rates are distinctly lower than in those areas, and discounts are often available.  The easiest place to plan a visit to Mesquite is at GolfMesquiteNevada.com, a one-stop site serving the major hotels and courses in Mesquite and environs.

As part of its marketing efforts, Mesquite hosted the tenth annual Media Golf Classic, an event previously held in Scottsdale.  The tournament – and I use the term loosely – took place in the first week of December.  Mesquite considers itself a twelve-month destination; the conditions provided a good test of the proposition.

I’ll be posting on each of the four courses played as part of the Classic; we begin an hour southwest of Mesquite, at the intersection of grandiose dreams and economic realities in the form of Coyote Springs Golf Club.

When approaching a golf course for the first time through the kind of forbidding terrain that typifies these vast open spaces, you expect to reach a point at which you’ll crest a rise, and suddenly see green stretches or at least slivers of fairway standing out against the gray sand around it.  The approach to Coyote Springs offers no such moment; even after pulling into the parking lot off State Route 168, you still can’t see anything that looks like golfing ground.

The Jack Nicklaus Signature design, which opened in May 2008, is intended to be part of a larger community; the original plans envisioned over 100,000 residents and more than a dozen golf courses, spread out over 43,000 acres, branded as “PGA Village at Coyote Springs.”   Surveyor’s poles are visible in the surrounding desert, and some areas for housing lots have been graded, but there are no residences either here or in the near or distant view. 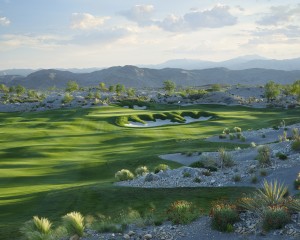 The tenth hole at Coyote Springs.

The course is in excellent condition.  Tee to green, there is a surprising amount of elevation change considering the general flatness of the area.  The vistas of the holes, particularly early in the round, have as a backdrop the mountains of the Desert Wildlife National Range. 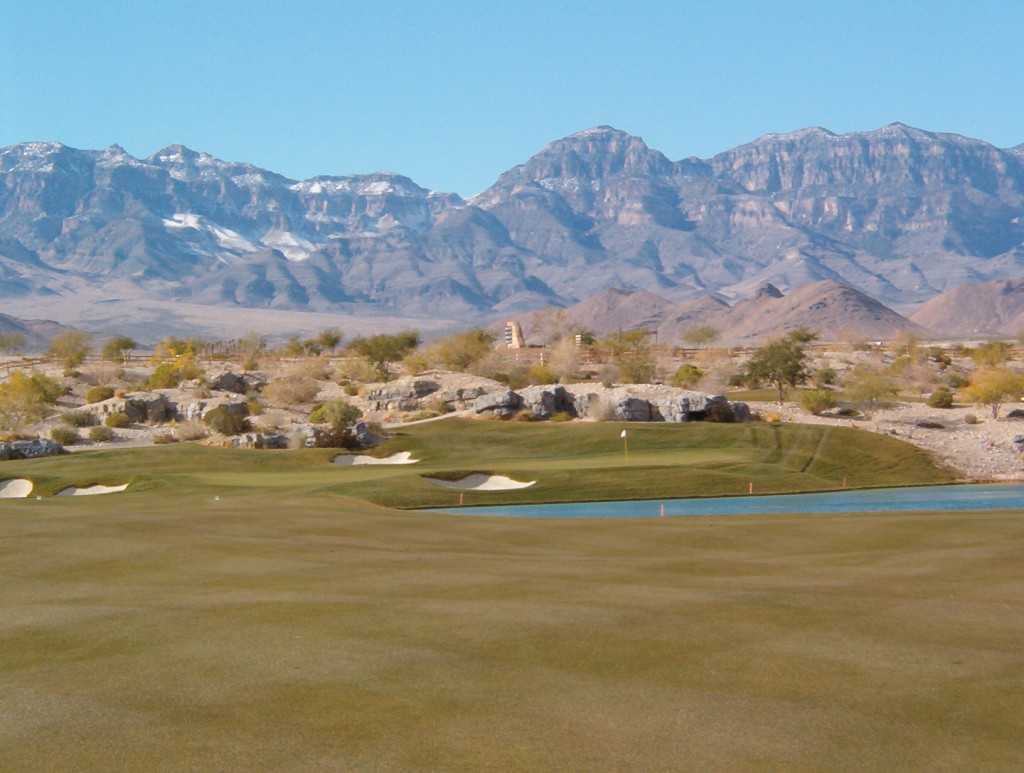 The picturesque setting for the 2nd green at Coyote Springs. 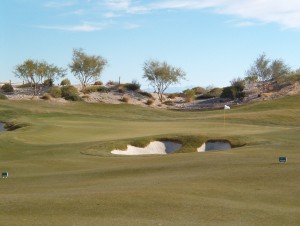 The first green is one of the calmer putting surfaces on the course.

From the black tees — not my territory — Coyote Springs stretches to 7471 yards, and a slope of 141.  The white tees, at 6215, offer plenty of challenge with a slope of 132.  The greatest difficulty, and there’s plenty of it, lies in the undulating greens.  There are no simple putting surfaces anywhere on the course; the greens dip and rise, and can be frighteningly slick from above the hole — yet “above the hole” is hard to define on the approach shots, because of the many subsections, hollows, and ridges.  The pin placements on the day we played seemed diabolically chosen, though it was difficult to find any flat or concave spots that would make the putting easier.  Expect all but the most perfectly struck approach to roll out some on landing.

Most fairways are framed with bunkers on the edge, providing definition.  On the par-5 fifth, a desert wash separates the fairway into three distinct segments; after the drive, you have to choose whether to go to the “island” fairway to the left, leaving an approach shot over a bunker to a very shallow green, or brave the longer carry to the right-hand section, setting up a short wedge shot that uses the full side-to-side length of the green.

The long par-3 eighth — 219 from the blue tees, 196 from the white — has water on the right side and a green angling from left to right as you see it from the tee.  Yet the hole is made manageable by the slope that runs to the green from a bunker on the left and 30 yards short of the green.  So long as the tee shot carries this bunker, it will kick and run along the long axis of the green. 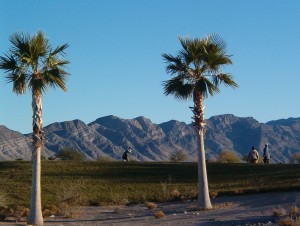 Despite its empty location, Coyote Springs hosted 21,000 rounds in 2011.  It is about an hour’s drive from Mesquite, 55 minutes from Las Vegas. The course is building its relationships with the Vegas casinos, and draws many groups of 12 to 20 golfers that way, as well as individual tourists.

Coyote Springs was named one of America’s 100 Greatest Public Courses by Golf Digest in 2011. It is definitely an excellent layout, but the difficulty of the greens can make it a frustrating place to play if you hope to score well.  Bring your finest putting touch, and don’t blame yourself if you fail to match your usual game.