With Rule 33-7, the USGA and R&A have bifurcated the penalty for scorecard violations. For the mass of competitions, it’s disqualification. For professionals, especially in the most scrutinized competitions, it’s been waived — and maybe that’s ok.

Quick review, because it’s easy to forget in all the wordage and windage and outrage and blather (some of it mine): Was Tiger’s drop improper? Yes. What’s the penalty for that drop? Two strokes. Was he assessed two strokes? Yes, eventually. Did he sign a wrong scorecard, with a score lower than the correct one? Yes.

It’s the penalty for the scorecard–not any question related to the drop–that’s at the core of the argument.
If you are outraged that Tiger was permitted to continue in the Masters, it’s because the act of signing the scorecard is supposed to be the bedrock guarantee of the game’s integrity. This is how it has almost always been treated in the past, thus it is how it should be treated now.

Step back a second from precedent: Does this make sense in contemporary high-level golf? Or is it an archaic practice on this level of golf, unrelated to the true integrity of the game? 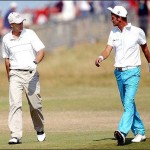 It was absurd for Mark Roe and Jesper Parnevikto be DQ’d in the 2003 Open Championship for their silly error in forgetting to swap scorecards. Why do players in a major championship have to keep their own cards anyway? What’s the point? Is someone at the Masters going to get away with lying about their score?

Fred Ridley, chairman of Augusta National’s Tournament Committee, said in his press conference that the committee had reviewed the drop during Tiger’s round. If the committee had found a violation at that time, it would have informed Tiger prior to his signing the scorecard, and he would have signed for the correct higher score. This is the modern practice at highest-level golf: a player might (and should, and usually does) call penalties on himself, but if he doesn’t, a Rules official will inform him of one rather than standing back and playing Gotcha! after an incorrect card is signed.

Maybe that makes sense. Probably it does. When giant scoreboards track your score hole by hole, why should a mistake on your slip of paper result in disqualification? Correct the mistake, and move on.

It seems that 33-7 (technically it’s Decision 4.5 under Rule 33-7) ushered in bifurcation on this issue through the back door. People are outraged — I am one of them — that 33-7 should be used to circumvent a long-cherished principle of the game on the game’s highest stage — especially since 33-7, when introduced, was explicitly described as serving a diffierent purpose and excluding its use under these exact circumstances.

In general, I’m in favor of bifurcation of the Rules. The pros play a very different game than we do, and I see no problem in letting the rules recognize those differences in some areas.

The trouble is — and it’s why I haven’t yet let go of my outrage — the rules themselves say something different, and the weight of history says something different. Tiger feels fine about playing on because he’s operating on the basis of the practice and precedent he’s experienced on Tour and at the majors — where Rules officials go out of their way to inform players of penalties before they sign their scorecards. Is this recognition the reason for 33-7/4.5? That’s not what the rulesmakers said when they put it into the book. It’s not what the system used to be.

But maybe it’s not wrong. It’s simply bifurcation. And maybe it makes sense.