On the eve of the 2011 Masters, the USGA and R&A announced jointly a new policy regarding rules violations spotted by viewers on television and unknown to the golfer involved.

The policy distinguishes between violations that occur because the player didn’t know the rule, and those that involve facts the player could not have known that were noticed thanks to slow-motion replays on high-definition broadcasts.

For convenience’s sake, let’s refer to these different types of cases by the names of players who got caught up in them in January, 2011.

We’ll call the first kind of violation “a Villegas,” in honor of Camilo Villegas at Kapalua, where he moved divots out of the way of his ball as it was rolling back down the hill towards him.  He didn’t realize there was a rule against this, signed his scorecard without adding any penalty strokes for the action, and was disqualified under Rule 6-6(d), which covers signing for a score lower than your actual result.  The incident came to light when television viewers phoned in the violation.

The other, involving facts the player could not have known, we’ll call “a Harrington.”  Padraig Harrington at the Abu Dhabi Championship marked his ball on the green, replaced his ball, and as he removed his marker the ball rocked slightly forward and then back, but not all the way.  Harrington knew he had touched the ball but had no idea it had moved; neither did any observers on the scene.  The motion was detected through an extreme close-up examination of the ball viewed in high definition; the viewer sent an email to the tournament referee, and after further review Harrington was disqualified, a decision he accepted graciously.

Under the new joint ruling, in both these cases the player should be assessed a two-stroke penalty.  In the case of a Villegas, this still results in disqualification for signing an incorrect card with a lower score.  For a Harrington, the penalty is assessed but the player can continue in the event.

This is a good common-sense decision, one that gives no player a pass, but eliminates the harshest penalty for a player who could not have known the fact of his violation.  For those merely ignorant of the rules rather than the facts, it’s still a DQ.

The change brought to mind a little-remembered rules violation from half a century ago, a situation in which the lords of Augusta National did a little reconsidering of their own and took a more liberal stance than the rules makers have, waiving the disqualification penalty for a player who committed a Villegas.

In the first round of the 1960 Masters, Dow Finsterwald made his putt at the fifth hole, then dropped his ball and putted it in the direction of the sixth tee.  The Rules of Golf did not yet prohibit this kind of putting practice during a stroke-play round, but a PGA rule banned it on the tournament circuit.  Finsterwald didn’t realize that the Masters’ rules committee had decided to use this local rule decision in the event, even though this fact was written on the back of each player’s scorecard. 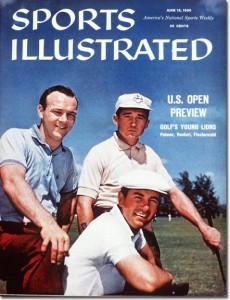 No one took notice of his gaffe the first day, when he shot a 69 to trail first-round leader Arnold Palmer by two.  On the second day, paired with Billy Casper, Finsterwald repeated his action after holing out at the first, but before he could hit the ball Casper yelled to him not to do it, that it was against the rules.  Sure enough, there was the notation on the card, and Finsterwald realized he’d broken the rule the day before.

He immediately informed a rules official, and was told to play on, that the committee would inform him of its ruling after the round.  On the back nine, he was informed that the best he could hope for would be a two-shot penalty, but that no decision had been made yet.  Despite the uncertainty, Finsterwald shot a 70 that gave him the halfway lead.

As Finsterwald waited at the base of the TV tower at the eighteenth green, the tournament’s rules committee – former USGA president John Ames, USGA Executive Director Joe Dey Jr., PGA Tournament Director Ed Carter, and Augusta National’s tournament committee co-chair (with Ames) Frank Edwards – discussed the situation for over half an hour.  Their final decision: Finsterwald would be assessed a two-stroke penalty on the first day’s score, increasing it to 71 (and his 36-hole total to 141), but he would not be disqualified because the violation had not affected his play of that hole.  They felt “the circumstances were unusual enough” to waive what was then Rule 38-3, calling for disqualification (Rule 36-5 gave the committee discretion to adjust such a penalty).

Finsterwald had gotten away with a Villegas.

At the end of the tournament, he wound up two shots behind Palmer, who finished birdie-birdie on Sunday to nip Ken Venturi by a stroke.

In reviewing the events surrounding Finsterwald’s error, Herbert Warren Wind wrote in Sports Illustrated, “This decision and the spirit behind it is a step in the right direction.  Rules are rules and we all know their importance, but in the complicated world of tournament golf today where there are USGA rules and PGA rules and local rules, outright disqualification should be avoided for a technical, peripheral error such as Finsterwald’s…

“This matter of incorrect scorecards is a whole province in itself, difficult, ticklish and ramified, but some review of the present procedures might be undertaken with profit.  In this general connection, it has long seemed to me that it would be a sound idea to install two tents at all important tournaments.  One would be directly behind the first tee, and the players would pass through it before beginning their rounds.  Inside, any rules requiring their special attention would be posted, and an official would be present to answer any questions.  The second tent would be situated right behind the 18th green, and the players would enter it directly after finishing a round.  With no distractions they could calmly go over their cards and consult with an official on problems.”

Eight years later, the absence of such a tent by the final green cost Roberto de Vicenzo a place in a Masters playoff, when he signed for a score that was one stroke higher than he had shot.  The scoring trailer is now a fixture of high-level tournament golf; the first-tee tent is still a good idea, one that might have saved Dustin Johnson some embarrassment at the 2010 PGA Championship.