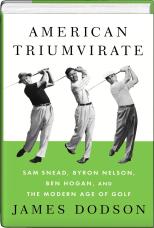 If you care about American golf, get your hands on a copy of James Dodson’s “American Triumvirate:  Sam Snead, Byron Nelson, Ben Hogan and The Modern Age of Golf.”  Read it slowly, letting the story resonate. Dodson doesn’t claim that the era of these three icons, extending from the late 1930’s to the 1950’s, is a golden age in American golf, but it’s impossible not to marvel at the epic contours of the story he tells. These three legendary golfers — all born in the same year, all from humble backgrounds, all supremely talented — didn’t single-handedly transform the game of golf, but they did bring it into the modern era.

And each of them left an indelible imprint. To this day, even though most golfers never laid eyes on any of them, their personalities stand as archetypes. Nelson is the supreme technician, the mechanical man (and the namesake of the USGA’s ball testing device, Iron Byron); Snead is the ultimate natural, the hillbilly blessed with nonpareil athletic ability; Hogan is the single-minded perfectionist whose passion, discipline, and commitment finally yielded a measure of command that remains a standard — and a mystery.

Three utterly different individuals, but their stories are braided together like the strands of a rope. Golf history buffs won’t find many new revelations in “American Triumvirate,” but by telling the stories side-by side, Dodson creates a fresh perspective. He shows how much they competed with one another, and how their stories reveal the mood and spirit of a country as it moved through a Great Depression and a World War into an era of power and prosperity.

It makes so much sense to write about these three golfers together that you will wonder why it took so long for this book to get written, and why “American Triumvirate” isn’t a standard phrase in the lexicon on golf, as familiar as Grand Slam. It certainly has more heft and meaning than various efforts to promote groups like the Big Three or, more recently, the Big Five. Those phrases were marketing tools, coined for promotional purposes, but Dodson is doing something far more substantial. He’s asking his readers to reflect on the way that American golf achieved its shape and character.

All three golfers were, in the richest sense of the term, self-made men. They all started as caddies, and they all developed their golf game without the benefit of the coaches, schools, psychologists, gurus, and hovering parents that seem to surround every promising young golfer today. As Hogan famously said, he had to “dig his game out of the dirt.” Even though all three golfers at different times held coveted positions as pros at prosperous clubs, the golf environment of mid-century America seems to have been healthy and democratic, with interest in the game at all levels of society.

Hogan, Nelson, and Snead all became rich and famous; their stories and personalities resonated with other Americans who came from similar backgrounds, and who’d left their own small towns to pursue success in a country that was discovering itself as a world power.  In “American Triumvirate,” the routes they travel, driving coast-coast in their Buicks and Cadillacs, crisscrossing the country on two-lane roads, show a country that is emerging from regionalism into a larger sense of its identity as a nation — and these three iconic golfers contributed to that identity.

Dodson describes the high and lows of their careers, and the evolution of their swings — the swings that have served as models for generations of golfers. And though he doesn’t make the case implicitly, many readers will conclude, as I did, that the way they played the game left a legacy just as important. Their individuality and integrity, their respect for each other and for the game itself,  were exemplary. They played hard, they played fair, and they showed America that champions could come from any background in any corner of the country.

I am just old enough to remember stories of these golfers. My grandfather, who wasn’t a golfer himself, was the first who told me about them — about Slammin’ Sam the hillbilly, about the way that Hogan had thrown himself in front of his wife when he realized that they were about to be hit by a bus, about Nelson’s steak. He described them as heroes, and that impression has remained. Today, it’s a lot harder to find heroes in any sport, and some books have the effect of tearing heroes down. In “American Triumvirate,” Dodson makes his readers understand that these golfers were flawed and limited, like all human beings. But in their devotion to a game and their will to succeed, to develop their natural talents along the lines of excellence, they were heroic, and they were bred-in-the-bone Americans.