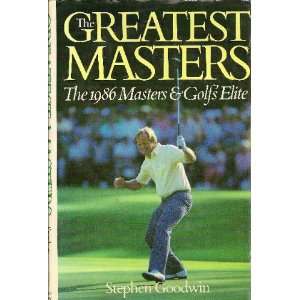 In the 25 years since the 1986 Masters, the tournament has settled comfortably into the realm of legend.   The images are so familiar, and the memories so vivid, that we think we know it inside out. . . but sometimes, focussing on the main events, we let the subplots and juicy details slip away.

The heart of the story of the 1986 Masters is the brilliant final round that Jack Nicklaus played to win his 6th Green Jacket.   He shot a 65 in the final round — 35-30, and that 30  was an incredible, magnificent, thrilling, inspired and inspiring performance that tends to overshadow all other elements of that watershed tournament.

In the simplified version, the 1986 Masters is represented as a showdown between Jack Nicklaus and Greg Norman — but there were plenty of other contenders.   And, coming on the heels of the first European victory in the Ryder Cup, the 1986 Masters took place at a moment when American golf was in need of a hero.   For the first time in decades, American supremacy was being challenged.  Even before play began, the tournament had taken shape  as yet another international showdown. and international rivalry would be discussed throughout the week.

Herewith 10 items to jog your memory:

1.  American golf was in the doldrums.   Golf writers were fond of the phrase “drone, clones, and robots” to describe the players on the PGA Tour, which seemed to have entered a directionless, post-Nicklaus era.   And it wasn’t just that Americans pros all seemed to be cut from the same mold; they were getting beaten regularly by golfers from other countries.  It was a jolt to American pride when the Europeans won the Ryder Cup in 1985.  Seve Ballesteros was the emotional leader of the Europeans, and he entered the 1986 Masters as the favorite — and the villain.  Bernhard Langer, another stalwart of the European Ryder Cup team,  was the defending Masters champion.   But it was Ballesteros who fanned the flames of controversy; he was embroiled in a fierce quarrel with Deane Beman, then PGA TOUR commissioner, about Tour eligbility, and he had to play his warmup rounds on a satellite tour in Florida.

2.  “I come here to win.”   In a TV interview, Ballesteros announced his intention  — and set off a storm of criticism.  Already disliked by many for his arrogance and hauteur (though he had ardent American admirers, too), Ballesteros set himself up as the man to beat in the tournament.    After 36 holes, it looked as though the Spaniard would make good on his boast.  He was in the lead with a score of 71-68–139.  Norman was 4 shots behind.  Nicklaus was barely in the picture.

3.  Saturday belonged to Nick Price.  He shot a 63, tying the course record, and it could easily have been a 62.  His putt for birdie on the 18th hit the cup and did a full margarita.  Price said, “It was as if the hand of Bobby Jones reached up and flicked it away.  63 is enough!”

4.  Trivia question:  What American golfer stood highest on the leader board entering Sunday’s round?  Answer:  Donnie Hammond.  He was at 211, one shot behind Norman, the 54-hole leader at 210.   Hammond was paired with German Bernhard Langer in the next to-last group.  In fact, four of the last five pairings featured an American with an international player, and the last pairing — Norman and Price — was made up of two internationals.  The presence of so many internationals was for many a sore subject, so sore that Gary Player was prompted to remind people that “We’re all golfers,” stressing the ecumenical nature of the game in a TV interview.

5.  Tom Watson was only 2 shots behind entering Sunday’s round.  Those who hoped for a restoration of the old order of things, for a victory by a proven American champion, were looking to Watson — not Nicklaus, who had scratched out a 69 on Saturday but entered the final round 4 shots off the pace and seemingly out of it.

6.  Tom Kite, paired with Ballesteros, put together a superb Sunday round.  There was no love lost between these two, who’d been pitted against each other in the Ryder Cup singles matches.   Kite hadn’t forgotten the unruly, anti-American crowds, and he played with steely determination against the fidgety, melodramatic Ballesteros.  One peak in their round came on the 8th hole, where Kite holed a wedge for an eagle — and Ballesteros holed out on top of him.   Kite tends to be overlooked in the recounting of the Sunday, but he hung close to the lead all day, sharing it at times, and he missed a putt at 18 that would have put him into a playoff with Nicklaus.  “I made that putt,” he would say afterwards, “it just didn’t go in.  I made it six or seven times in practice rounds, and it never broke left once.”

7.  Jack’s good luck.   We all know about the glorious shots on the back nine — the 4-iron to the 15th to set up the eagle, the tee shot to the 16th that almost went in the hole.   But just as important was a shot that Nicklaus mishit on the 8th hole, after having driven into the pines.  He had a clean lie on the pine needles, and he decided to hit a 3-wood through a 6-foot opening, and not just to hit but fade it a little.  The safe play would have been to come out with an iron but Nicklaus was still thinking of winning.  The ball came out, all right — but not through the opening Nicklaus had aimed at.  Instead, it whistled through a tiny chink of daylight he hadn’t even noticed.   It was a huge break.

8.  The gallery –er, the patrons — made their will known on the back nine.  Ballesteros had gotten himself back into the lead with another eagle on the 13th, and when he came to the 15th he seemed to have the tournament in his grasp.   Waiting to hit his approach at 15, the hole that Nicklaus had just eagled, he knew the crowd was against him; he could hear people calling, “Hit it into the water”– and he did.  He would later call this shot a “bad miracle,” and he crossed the Sarazen Bridge to chants of “U. S. A, U. S. A.”  It doesn’t take a student of paranormal activity to believe that the collective will of the gallery had something to do with his bad swing.  The support for Nicklaus coursed through the place like an electric current.

9.  Norman’s charge.   Norman had stayed close to the lead through the front nine, but seemed to fall out of the picture when he double bogeyed the 10th.   On the back nine, when the roars went up for the Nicklaus heroics, he and playing partner Price were all but deserted.  “Let’s make some noise of our own,” Norman said to Price as they played the 14th.  He then reeled off four birdies in a row, the most impressive coming on the 17th, where he drove left and had to improvise a low, sliding approach with a 5-iron, keeping the ball under the branches and threading it just past the edge of the bunker.   Then he got to the 18th — and, well, we know what happened there.  4-iron, wide right. Another bad miracle?

10.  Speaking of 4-irons, maybe I’m a woo-woo but I can’t get it out of my mind that the 4-iron was the definitive club of this tournament.  It was a 4-iron that Nicklaus hit to the 15th green, the shot that ignited the crowd.   Just before Ballesteros had hit a 4-iron to the 13th to set up his eagle, and he went back to the 4-iron on 15 — and dunked it.  On the 18th, Norman took himself out of the playoff with a 4-iron . . . okay, maybe it’s just coincidence, but still.  Something uncanny was going on at Augusta that day.  I can’t be the only one who sees the poetic rightness of Nicklaus rounding off his career with 18 majors — 18, one of golf’s bedrock numbers.   Of course, Nicklaus wasn’t superstitious about it, and as he told the press at Augusta, “I’m not smart enough to retire, guys.”  Instead, he went out and played strong, competitive golf in many of the big events of the season, and it was pretty clear that he would have liked to add another major to his tally.

For more on the 1986 Masters, you might want to take a look at The Greatest Masters, an out-of-print book that is available through some dealers.  In my opinion, this book should be better known — but then I’m biased since I wrote it.