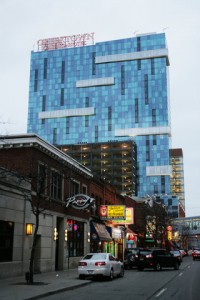 I don’t know Gilbert, but I do know that he’s buying in to stay.  He is the man – and one of several key players, when it comes to supporting Detroit’s commercial revitalization and making things happen.  Plus, Greektown Casino needs a little of Dan’s magic.

Don’t get me wrong, I basically like Greektown Casino.   Located on one of Detroit’s busier streets, it’s a centerpiece among wonderful eateries, a super bakery and some fun taverns.

The casino building itself has a lot of interest.   It has exposed brick in some areas and open air balconies; a couple of walkway bridges in an airy glassed-in atrium, with one leading to a non-smoking gaming area, and it has two full floors of gaming.  The place has nice natural architecture, and connects to a People Mover stop, Fishbones Restaurant and some downstairs eateries

The hotel has an almost cheezy opulence in its lobby and main restaurants, but it’s a welcome touch of Vegas in the ‘D.’  When we stayed there a couple of years ago, the rooms were trendy, comfortable and freshly appointed.   Our standard room was a bit small, but delightful, and breakfast in the Bistro 555 was elegant and tasty. 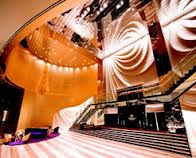 That was then.  Earlier this week, I visited the casino.  Having stayed and played in smoke-free Windsor the night before, I found Greektown Casino to be crowded, very smoky, noisy and plain old tired.  The walkway carpet from self-parking to the casino looked dirty and worn, and gone was the open lobby and gift shop that used to greet arriving guests.   Instead, there was a new coffee counter – and that’s it.  I think things are under construction and renovation – at least I hope so.

In addition, you used to come into the main area of the casino and find the welcoming Club Greektown players club on the right, ready to issue new cards and share new promotions.  Granted, there were often long lines on promotional days, but the club’s been moved, waaaaay to the other side.  Find it if you can.  And when you get there, it’s nothing special.

Also, the gaming tables are where I remember them, but on one side, there now is a line of square tables and chairs for eating or drinking.  That’s an odd side-by-side. Downstairs, a new open lounge looks a bit unfinished and, well, too open.   While an OK idea, it didn’t impress.

Nonetheless, the casino does have a nice variety of slots – 2,700, in fact – a good-sized pit of table games, and a Poker Room with 12 smoke-free tables.

Greektown needs a little more of what it used to be and a nice boost to make it the showplace that it can be.   With its proximity to Tiger Stadium and built-in People Mover station, it is easily the most accessible of Detroit’s three casinos for those staying or attending events in Detroit.

So welcome, Rock Gaming and Dan Gilbert! Maybe you’ll also be the first to make a bold move by re-introducing Greektown as Detroit’s first non-smoking casino?  That would be heavenly!

So bring on your Quicken style magic, and please make it quick!