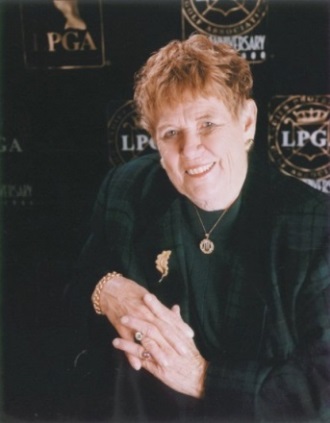 Shirley Spork, Eastern Michigan University alumna and LPGA founding member, helped to provide one of the greatest legacies of women’s golf; the establishment of the Ladies Professional Golf Association (LPGA). Throughout her golfing and teaching career, Shirley won and placed in a variety of tournaments and has received numerous awards, including receiving the Ellen Griffin Rolex Award, the LPGA’s highest teaching honor and being inducted into the LPGA Teaching and Club Professional (T&CP) Hall of Fame.

Betty Richart, a longtime Ann Arbor resident, has been involved in nearly every aspect of golf – women’s golf, junior golf, and course ratings. She served on the United States Golf Association Women’s Committee for 17 years, the last two as chairman. During her 1989 chairmanship, the U.S. Women’s Open at Indianwood Golf & Country Club was one of the most successful and well-attended Women’s Open in the history of the championship. Betty has received numerous awards, including having a tournament and trophy named in her honor, the Betty Richart Club Championship at Barton Hills Country Club and the GAM Women’s Championship – Betty Richart Trophy.

Mary Fossum’s greatest legacy to women’s golf has to be the cadre of young golfers she mentored as coach of the MSU golf team for more than 25 years. Mary has received much recognition as one of the country’s best collegiate golf coaches, including induction into the Golf Coaches Hall of Fame. She, too, has two awards named in her honor, The Mary Fossum Endowed Scholarship for Women’s Golf at MSU and the MaryFossum Award presented to the student-athlete with the lowest stroke average in the Big Ten Conference.

“We are thrilled to bring together these three legendary women to celebrate their pioneering contributions to golf in Michigan, nationwide and globally,” said Francine Pegues, Legacy Celebration chairperson and MWGA President. “We look forward to a wonderful day of golf and the gathering of Michigan golf leaders and participants to say ‘thank you’ to these phenomenal ladies, while benefiting the future of women’s golf through our MWGA Girls Golf Program.”

Many leaders in the Michigan golfing industry are members of the MWGA Legacy Celebration At-Large Committee, an indication of how much the community values the three women being honored. The Planning Committee for the event consists of: Francine Pegues, Chairperson; Susan Bairley, Janina Jacobs and Sara Wold, Vice Chairpersons; Barbara Coury, Barbara Porter, Terri Ann Ryan, Nancy Serra, Pat Shelton and Sandy Wagner.

The day’s events will include an 18-hole scramble tournament, lunch, dinner, an auction, and raffles along with the awards program. Proceeds from this celebration will benefit the Detroit area MWGA Girls Golf Program, conducted in cooperation with the LPGA and USGA, and the women’s collegiate golf teams at Eastern Michigan University, Michigan State University and the University of Michigan. The entry fee for the day’s events is $150; with a dinner only option of $60. Registration is available at mwgolf.org or by emailing entry@mwgolf.org and various sponsorship opportunities are available. MWGA is a 501(c)(3) charitable organization, allowing a portion of entry fees and sponsorship donations to be tax deductible as permitted by law.

Since 1986, the Michigan Women’s Golf Association (MWGA) has been instrumental in promoting women’s golf in Michigan, earning national recognition for its efforts on behalf of women golfers everywhere. The MWGA has provided leadership and financial support for many endeavors involving golf in Michigan, including youth programs, the Michigan Golf Hall of Fame, Golf Association of Michigan programs, USGA events and more.