Sometimes you just know when the time is right.

And this time it was the tone of the press conference where LPGA Commissioner Michael Whan announced a new 2016 Tour Stop for the LPGA, Memorial Weekend, May 26-29, at Travis Pointe Country Club. 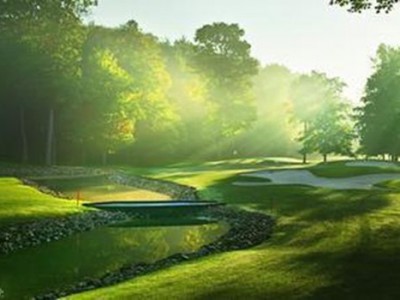 Club members, community officials, one local high school girls golf team and some of the area’s who’s who in local golf, along with media, were among the approximately 200 people who gathered to hear, and cheer, the news – the inaugural LPGA Volvik Championship is coming to Ann Arbor.

Whan, in what I’d assume is his usual upbeat and free-wheeling style, said the LPGA’s arrival will have a community impact beyond its display of world-class golf. “Many of the players will be staying with local families, so you can expect cookouts and block parties as the players become part of the community (during their stay). 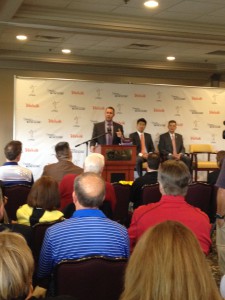 Whan also said choosing the Memorial Holiday weekend for the Volvik Championship fit the Tour’s, sponsor’s and community’s desire to create a “great hometown event, and celebrate spring, too.”

The LPGA Volvik Championship will feature a full field of 144 players competing in a 72-hole event for a $1.3 million purse. The event will join the Meijer LPGA Classic in Grand Rapids, in bringing the LPGA Tour to Michigan twice next year.

Three Symetra Tour events also will bring women competing for their LPGA Tour cards back to Michigan in 2016: The Island Resort Championship at Sweetgrass Golf Club in Harris (near Escanaba) in Michigan’s Upper Peninsula; the Firekeeper’s Casino Hotel Championship at Battle Creek Country Club in Southwest Michigan; and the Tullymore Classic at Tullymore Golf Resort in mid-Michigan’s Stanwood. Add a related Legends Tour event usually held in Jackson, Michigan, each year, and spectators can anticipate a full summer of opportunities to enjoy and get involved with professional women’s golf.

LPGA Tour Player Katherine Kirk, who appeared at the press conference with fellow Touring Pros Victoria Elizabeth and Amy Anderson, said she’s looking forward to playing at Travis Pointe, noting that the Michigan courses “are incredible. The season’s so short, you have to make the most of it!” The women also commented on the uniqueness of the fan experience for those who follow the LPGA vs. the men’s PGA Tour. “The players are right up on the ropes. We embrace the fans and make you feel welcome, and you’ll see exceptional golf.” 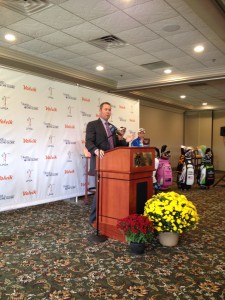 Although golf ball producer Volvik has been an official sponsor of the LPGA Tour for the last five years, it is the first time it has assumed title sponsorship, and has signed a three-year title sponsorship deal. Volvik USA President Don Shin said since 2013, Volvik has been “the fastest growing golf ball (brand) with 1.7 percent market share in the U.S., and 30 percent in South Korea.”

Shin also said five of the top 30 LPGA players use Volvik balls, noting that the name comes from the Italian “volare,” which means to fly high.

The idea to bring the LPGA tournament to Southeast Michigan was prompted by local businessman KC Crain and his wife, Ashley, along with tournament director Keith Karbo. At the press conference, Karbo also announced as part of the event, the LPGA is partnering with the National Network of Depression Centers to support veteran’s mental health. The NNDC has 23-member centers, including the University of Michigan Comprehensive Depression Center in Ann Arbor, which locally operates the M-SPAN Military Support Programs and Network initiative