Manhattan is one of those places where car-ownership serves nearly no purpose, except to get out of town. 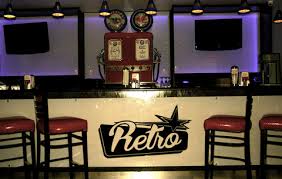 Most days, you don’t need a car. And generally, you don’t want a car. It’s not fun to drive in New York City.  There are relatively few gas stations, lots of one-way streets and a sea of yellow cabs that will all but swallow you up as you crane your neck to see if the corner you’re approaching is where you need to turn.

Even when it’s not in use, a car costs you. The average price for monthly parking in Manhattan is $431, although some garages will offer discounts if you commit to a six-to-twelve-month contract. Hourly rates vary widely by neighborhood — from about $6 to $25 or more. (Pamela Skillings, About.com Guide)  And parking tickets are expensive.  Earlier this year, I parallel parked in what I thought was a metered zone among a line of other cars on Canal street in Chinatown. It turned out to be a ‘no standing area’ and landed me a $115 parking ticket and a not-too-friendly ‘guilty’ verdict when I tried to appeal.

So finding Retro Bar & Grill, a new 1950s-style car-themed restaurant in the lower level of the Holiday Inn at 150 Delancey Street on the Lower East Side was nearly shocking in a city that seems to despise car ownership.

When I was there in April, the restaurant was new – brand new.  As a matter of fact, the hotel itself, which was trendy, clean, welcoming and comfortable, had just opened.  It didn’t have its liquor license yet (it was a couple of weeks coming), and therefore, didn’t have the typical group of weary business travelers cozying up to the Retro bar.  It’s kind of hard to find guilt-free, relaxing end-of-day solace in a milkshake, ice cream soda or egg cream.  The restaurant also had not yet opened its street entrance, so you mostly would only know it was there as a hotel guest, which my daughter and I were happy to be for a couple of nights. 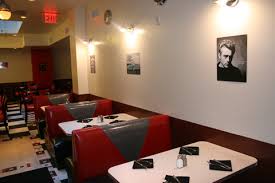 Booths at the Retro Bar & Grill

It can be challenging to be a restaurant on a ‘lower level,’ with no outside view, but Retro embraces its basement status with its 1950s theme, and you feel like you could be in your Midwest neighbor Harry’s recently finished basement.  The classic black, white and red décor with a touch of neon, James Dean photo and metal car signs on the walls and 1950s music are fun.  The menu is ‘burger joint’ with a NYC upscale twist, and the food I tried was delicious.

Burgers are all car named.  The Thunderbird is a classic beef hamburger; the Bel Air, a bacon cheeseburger.  And then it gets interesting. The Chevelle is an Italian chicken burger, the Impala – mushroom and gruyere topped hamburger.  The Road Runner is a lamb burger; the Super Bee, a pork burger; the Fire Bird, chicken; the GTO, turkey; the Coup Deville, black bean; and the Fairlane, tuna.

When I visited Retro, it was late by most dinner standards, around 8:30 p.m., and I was the only one in the restaurant, although it caters to hotel guests with room service until 11 p.m.  As a result, I was treated like a queen. 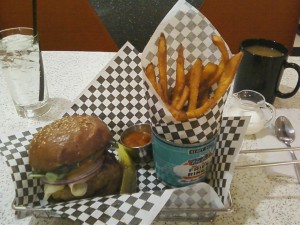 The Fairlane Tuna Burger and Fries

The hostess chatted with me, the server was uber-attentive and my Fairlane tuna burger, arriving in a cute metal basket, with an up-tick order of sweet potato fries was fantastic.  The menu does itself a disservice by not recounting its entree ingredients, because the tuna burger was anything buy plain.  Infused with a variety of spices and ingredients, it was prepared perfectly, served on a wonderful bun, and was a flavorful treat.  Similarly, the sweet potato fries were done ‘just right.’  Wanting to take the rest of my coffee to my room, I was pampered by one of the kitchen staff, who brought me a fresh to-go cup, with a side of cream.

Later that evening, my daughter decided on a room-service order of French onion soup, which arrived promptly and while it was tasty, it was laced with bacon, which is an interesting and flavorful twist, unless you’re vegetarian, like my daughter.  Again, the menu’s lack of an ingredients listing, is my only complaint.

Although the Holiday Inn and Retro Bar & Grille are not in NYC’s most walkable area (Delancey is a main street that carries traffic to the Williamsburg Bridge), both are wonderful finds.

Once discovered, most patrons will be back.