Not even chilly, overcast and rainy weather can spoil a summer weekend in Glen Arbor. Especially if you’re among friends. That was our good fortune as we recently visited long time and cherished friends (Meg and Russ) who live in Holland but have a beautiful condo in Glen Arbor. Over the last decade, they’ve been wonderful, generous “Up North” hosts whose company has lent much laughter, stimulating conversation and spirited game and card competition. Let me provide a few declassified details about our most recent stay and play foray in Glen Arbor. And get this: we didn’t even bring our golf clubs! (Note: the topic of the game did occasionally pop up.) 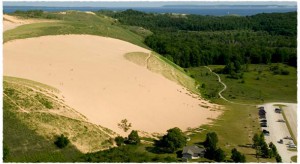 Sleeping Bear Dunes—No matter how many times we’ve been there, this National Lakeshore always delights. On this trip we biked from “downtown” Glen Arbor out to the Glen Haven Historic Village, within the protected and preserved National Lakeshore, where we stopped at the General Store and appreciated the background and history of the area via its modest but nicely done exhibit and museum area. Naturally my eye caught sight of an old golf bag and clubs and a little write-up about the long closed and short-lived “Day Forest Estates.” The 18-hole golf course was a part of an ambitious real estate development started in the ‘20s which never flourished due to the Great Depression. The course stayed opened a few years and then closed. Today hikers along the Alligator Trail can still see fading evidence of its fairways and greens. (Come to think about it: when playing badly, there’s also fading evidence of fairways and greens.)

Duly educated, we hopped back on our bikes and made our way out to the famed Dune Climb where the strong and the foolish tackled the rising expanse of sand. We conserved our energy while counting out-of-state license plates and pondering themes for new teeshirts such as “Digitize this!”

While biking: “Did you notice Mickelson had 31 one-putts in winning the Open? And he only had 3 three-putts for the week.”

Little Traverse Inn—Under new ownership and tastefully renovated, this B&B with its gastro pub—our dining choice—is only a few miles north of Glen Arbor in Maple City on M-22. We had an ideal table next to the front window overlooking the patio and offering a bonus glimpse of Little Traverse Lake now shrouded in a misty rain. The LTI has a British B&B look and feel and sports a fitting and affordable menu, marked by craft brews and local wines as well as stews, Shepherd’s Pie and the traditional fish and chips. And much more. After a delightful dinner, it was apparent why our friends are on a first name basis with owners Graeme and Judy Leask.

During dinner:“Tiger remains so self-absorbed. In his post-round interview, he didn’t even acknowledge Phil’s sensational 66. No surprise, a tiger can’t change it stripes.” 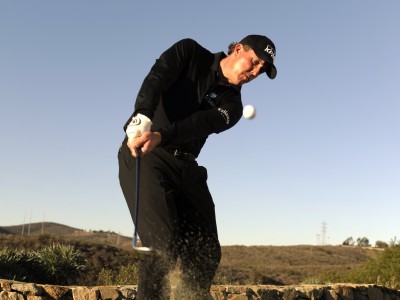 Alligator Hill—Our goal the next morning was to hike the Alligator Hill trail and to catch sight of those forgotten remnants of “Day Forest Estates.” Instead of finding an arrowhead, might we dig out of the soil an old golf ball? No such luck as a steady rain forced us to take shelter under a large oak tree. But then in the downpour Russ shared a story of how he obtained a replica of an old golf ball from a playing companion he met at Manitou Passage GC where he’s a member. Russ said the golfer was involved with a company called Struckwell which makes belt buckles. Belt buckles? Yes, but belt buckles that are made using original hand forged golf clubheads from Scotland. Check it out at www.struckwell.com  As a calling card, the company commissioned some Struckwell golf balls, with old-timey octagonal dimples and lettering, for its founders to hand out to friends and prospects. According to Russ, the guy confessed to dropping a ball in the woods at the courses he visits. “It’s a little advertising that may create some interest in us,” he explained.

Well, the rain never did let up so we scratched the rest of the hike. The alternate itinerary was deployed.

On the ride back: “How about Zinger recalling Tom Watson’s quote that he didn’t learn how to win a major until he learned how to breathe?”

Leland and Northport—What do you do on a rainy day on the Leelanau Peninsula? You get in the car and just start hanging out, checking out shops while making (Eric) idle conversation. Given the weather, many others were doing the same. After a quick stop in Leland for some fresh fish for the evening’s dinner (Meg is a master chef who deserves a spot on The Food Channel) we then made our way to Northport. Looking for a good lunch spot, we ducked into Lelu Café. Going to the kitchen counter and reviewing the menu, we put a young waiter on the spot about eating there and elsewhere in Northport. “Well, you can’t beat our burger and a beer special for $8 but the place across the street also serves good food and you’d be happy there, too.”

Thoroughly disarmed and charmed by the waiter’s goodheartedness, we couldn’t go anywhere else. And the burgers and beers were indeed excellent. We even struck up a terrific conversation with the affable owner, Erik Owen, a native of Ohio who settled in Northport for good only two years ago. “I love it here as much in the winter as I do in the summer,” said Owen who also owns the WhoDo? a 48-foot world-class sailboat that he rents out for excursions on Grand Traverse Bay from the Northport Marina. Offering live music in the evenings (W-Sat.), Lelu is a place we’ll gladly patronize again.

Walking around the Northport Marina: “Don’t you love that commercial: ‘Yeah, you’re putting like that guy—what’s his name—Sneeedekur!’”

Manitou Passage Golf Club—In spite of the light rain and while the ladies were shopping, Russ and I spent some time at the putting green at Manitou Passage. Coincidentally, I played Manitou Passage (www.manitoupassagegolfclub.com) earlier this year and was impressed with not only the fine care and upkeep of the course (kudos to Supt. Brad Stowe) but also with its new Head PGA Pro, Lee Houtteman, one of Michigan’s top teachers and players. A competitor in the past two U.S. Senior Opens, Houtteman has also won several Michigan PGA events including the Michigan PGA Match Play and the Tournament of Champions. Along with General Manager Bob Summers, a retired IBM executive, Houtteman is building a player-friendly culture and ambience around Manitou Passage. “We want to stress more dos than don’ts,” said Houtteman, “and be a welcoming place.” Over the past few years, whenever I visit the rejuvenated golf course I always feel welcomed and always leave impressed. Russ made a good decision in becoming a member as he really enjoys the golf course. If he starts sinking a few more putts, he’ll like it even more.

On the putting green: “Good putters keep the putter face square at and through impact, with no flip or breakdown of the hands. Hey, let’s try that Struckwell ball!”