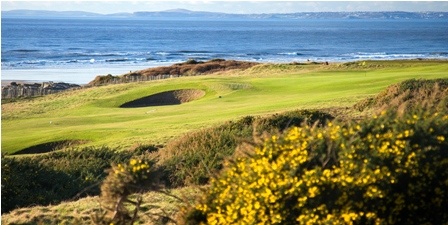 The First at Royal Porthcawl

The story is told of a prospective guest player appearing at the office door of Royal Porthcawl’s club secretary.  A round at Porthcawl, arguably the finest golf course in Wales, is no small feather in a golfer’s cap, and its guest policy is somewhat more stringent than that of most courses in the British Isles.  Thus, the interview with the all-powerful one was not a social call, but a vetting.

And it was terse.

Secretary:  “What do you play to?”

Lest the anecdote, apocryphal or otherwise, be taken as the philosophy of Royal Porthcawl writ small, the broader sweep of the club’s history—120 years of it—makes a contrary case. It is amply sprinkled with characters and stories that suggest not a rather puritanical approach to golf, but a place that revels as much in the sensual strain of its past as the plain-spoken classicism of its links.

Much told is, for instance, the matter of the lady player, who upon approaching the 6th green, discovered in the bunker guarding the right side both her golf ball and a couple in the throes of passion.  Nothing in the rules as promulgated by the Royal and Ancient seemed to apply (loose impediment, immovable instruction…?) so local mores were invoked: the couple was married within two weeks, and the bunker was filled in.

Porthcawl also once entertained Walter Hagen, golfer and rake non pareil, who insisted that the art of living entailed stopping to smell the roses.  According to Henry Longhurst,  Hagen, on his sole visit to Royal Porthcawl, was told that his tee time next day was 10:30 a.m.  Wrong, the club was informed.  The Haig evidently planned on smelling the roses that evening.  He would be at the first tee box at 3 p.m.  Wrong, the Haig was informed.  He showed up on time, but Walter Hagen’s was not a style easily cramped.  He arrived in a glittering Daimler that would have given Gatsby pause, his feet on the steamer trunks, cigar in hand.  Attended by most of Porthcawl, he twice went around in 81 shots, including one round in which he crowned his efforts with a butcher’s seven on number 18.  He of course failed to make the two-day cut.  The citizenry of Porthcawl, nonetheless, was jubilant: it had seen the great Hagen play golf on its links.

Even the coveted appellation “Royal” flavors as much of passion as monarchy.  The honor, granted to Porthcawl in 1909 by the little-noted King Edward VII, usually included a special association with a member of the royal family.  So it was with Porthcawl, which from 1923-1936 counted Edward, Prince of Wales, as its royal patron.  The Prince, later to gain enduring fame for abdicating the throne in order to marry the American divorcee Wallis Simpson, was very much a child of the Roaring ‘20s, well-known for his enthusiastic participation in the hedonistic practices of that decade.  He lived out his life as a romantic figure, revered in the public eye as a man willing to forgo a kingdom for love.

To the golf.  Apocryphal or not, the story of the club secretary’s high standards has a point to it: Royal Porthcawl has a temper: like that club secretary, it can be a testy, inflexible golf course.  From the tips, it measures 6697 yards, from the gentlemen’s tees 6197, playing to par-72 from both.  The numbers, of course, mean little: Porthcawl, like all links courses, is meant to be played in the wind.  And when it blows, there is nowhere to hide, for the course runs—atypically for a links layout–in a circle, not a nine out nine in vee.

Porthcawl first catches notice because of its visually striking geography: set on Wales’ south coast, the links look out across Bristol Channel to the slender, low-running pewter finger of England’s Somerset Coast.   Even a cursory glance at the ground inland from the curve of the beach promises prime golf; a long run of silver-grassed dunes yielding to the roll and heave of linksland. The course is free of trees, touched by, but not choked with, clutches of gorse and broom.  The terrain inclines mildly as it moves away from water, high enough for purists to pronounce the holes up top as of a heathland character. No mind.  If anything, the elevation ensures that the course delivers on the promise, often made and seldom kept, that the sea is visible from every hole.

Like many courses in the U.K., Royal Porthcawl began as a 9-hole affair built upon common land.  When the limitations of the arrangement became apparent, the current layout was put in place.  Over the years, a number of designers, professional and amateur, have tinkered with it, usually a recipe for architectural tragedy.  Yet the course today manages to do it all: its distinctive bunkering gives the course a consistent look; no hole repeats another; and its difficult challenge — distance and accuracy both count — is made clear at the outset.

Porthcawl begins with a flourish, opening with three par-4s parallel to the beach, each hole more demanding than the one before.  No hooks allowed.  It begins to bend away from the water with a par-3 of 180 yards, and then after following the property perimeter for several holes (yep, no hooks allowed), it zigs and zags through its theretofore unexamined center in a run of holes that features three strong doglegs.

As with the fireworks of three fours charging down the dunes to open, the course finishes in memorable fashion: a three hole salvo that presents what good courses do: equal opportunities for triumph and disaster.  Cross bunkers on the long 16th, (is there any more elegant hazard than a cross-bunker?) raise the possibility of a card-besmirching six, the par-5 17th, at less than 500 yards, is a genuine birdie opportunity for those who can spank consecutively a drive and an uphill fairway metal, and finally, the par-4 18th, a hole that glories in the view: 334 yards, gently downhill, with Bristol Channel providing the background for both shots.  The second shot provides the last touchy moment of the day, for a thin hit off one’s downhill lie will roll through the green, bound for the beach.

Once inside the small, not terribly distinguished-looking clubhouse, club history and impressions freshly formed begin to forge the golfer’s memory of Porthcawl.  Hanging on the clubhouse wall is a portrait of the patron monarch.  A handsome old clock, big, intricately marked, built by a Cardiff craftsman in the 19th century, marks the entrance to the grill.  As surely as Edward’s portrait takes the golfer back in time, the clock’s hands point, as clockhands always do, to the future.

There is a justifiable relish about the whole thing.  Be sure to take it all in.  It’s the province of kings and princes, players of enduring fame, stories transformed by time into local legend.  There is, beyond the windows of the room, a scene of water, land, sand, the promise of golf.  In the sanctuary of the clubhouse there is no such thing as a bad round, only a day when the wind raised Old Harry out there, or you were not quite on form. The chairs are overstuffed; bottle green and maroon, exactly as they should be.  The windows open onto those opening holes, loping down the beach.  Drinks are handed round with a far freer hand than were pars.  Rumination sets in.  The elegance of the routing… a shot you won’t ever forget… the tang of salt breezes…

The clock ticks.  Wouldn’t it be fine to play this one again tomorrow?