The Bluff’s second, third and fourth holes tumble gorgeously down to the shore.

With its lovely, forested site (though not necessarily great for golf), views of Lake Oconee and the surrounding development’s once deep pockets, you’d think The National’s 27 holes would comprise some of the most spectacular destination golf in the Southeast.

In actuality, the National bats in the middle of Reynolds Lake Oconee’s (formerly Reynolds Plantation) lineup. That’s not the worst thing in the world because there’s some stiff competition on site and they can’t all be the best, but Fazio is used to setting the bar wherever he goes rather than chasing it, and I’m sure the initial expectations were for something more breathlessly praised. 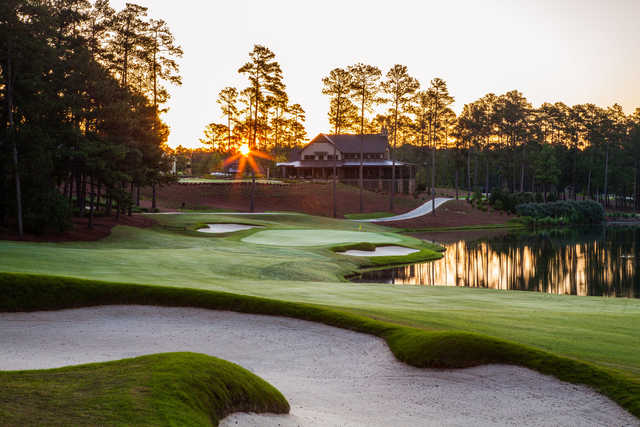 The 9th hole at the National’s Bluff 9 is pure, picturesque Fazio.

In places like this the scenery can become a crutch, or even a handicap if you’re relying on it to make the impact rather than offering unique, interesting holes. I imagine Fazio was asked to do more of the former than the latter, and therefore many of the National’s holes exist to basically showcase the pretty tree-framed backdrops and lakefront views for visitors and heavily invested members.

The holes look the part, with sculpted framing bunkers, destination eye features and elevated tee shots, without standing apart from each other or from the other courses. Golfers and homeowners have always been willing to pay a premium for that, but as much as the Engh and Rees Jones courses here garner controversial reviews in some circles, they were at least serving more serious ambitions.

The best of the three courses is the Bluffs nine which includes holes like the par-3 4th with an uncomfortably narrow green squeezed tightly against the steeply sloped shoreline, and the par-4 8th, where a creek runs diagonally along the front of the green from left to right, increasing the risk the farther back and right the pin is cut. The hazards there are real, and it’s nice to have your attention pulled toward the golf instead of the all the landscape. (87) 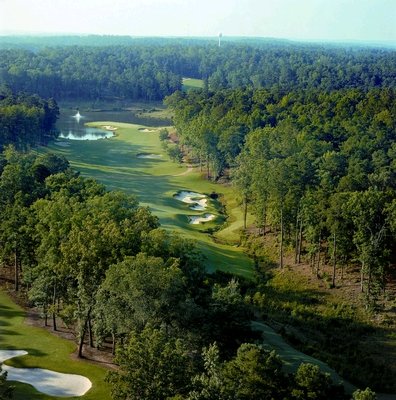 Fazio had a perfect backdrop at Reynolds Plantation for his balanced, framing architecture.

The National at Reynolds Lake Oconee