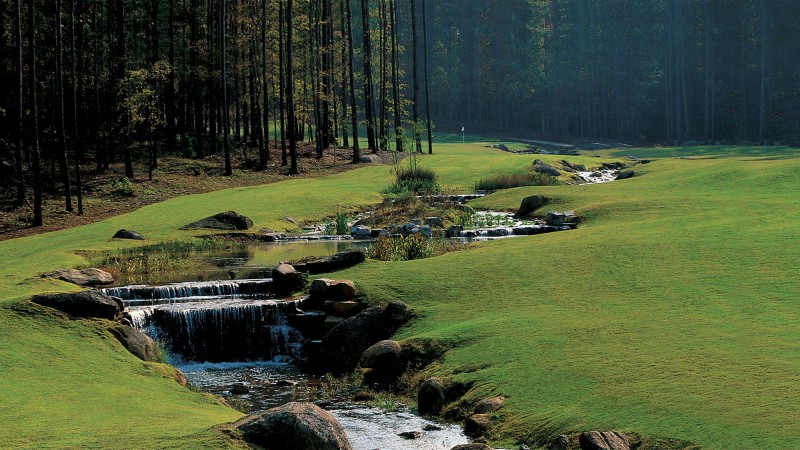 Some golf courses are finessed into the earth, simply revealed or discovered, as it were. Such is the mantra of naturalism and minimalism. The Oconee, on the other hand, screams, “I want land!” and goes and takes what it wants.

The corridors of this behemoth are forged from the property’s densely wooded hills in gargantuan swaths. You can practically envision Rees Jones operating one of those giant forest-eviscerating machines from Avatar, plowing through Central Georgia and leaving behind mulched woodland and gouged-earth fairways.

The holes play along natural ridges and down through valleys with embankments usually rising on both sides giving them a staggering luge-of-the-gods effect. The scale is impressive but the repetition of the look precludes almost any individuality in the holes. You might play the first seven or eight of them and have virtually no memory of it afterwards.

The course isn’t long, it’s just big. The bunkers and tilted, tiered greens are proportionately large, muscularly constructed and propped up above the fairways on all but a few occasions. Only when the holes get down to the water’s edge at holes like 9 and 17 does the design take a breath with gentle putting surfaces that stream down the grade and nestle close to the lake. 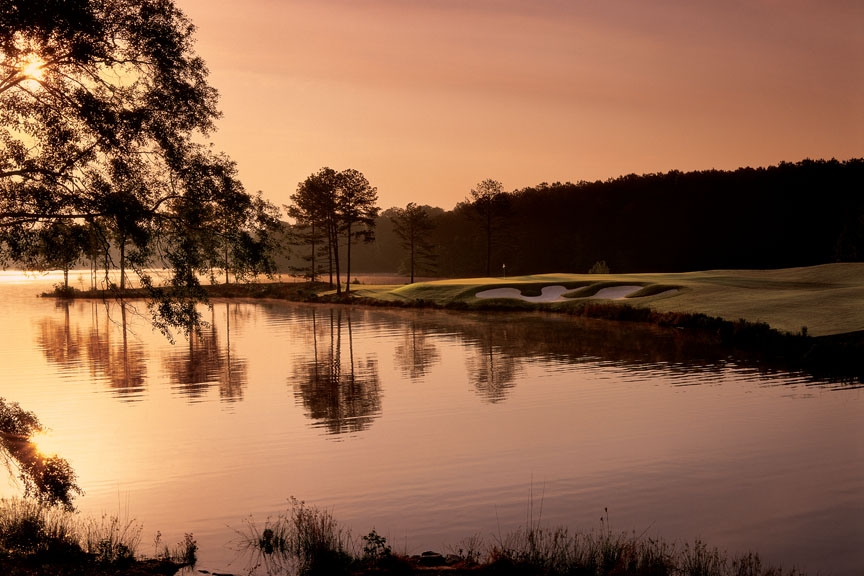 Another lovely hole, the par-3 15th again requires a full carry to reach most portions of the green, though shorter tees offer a clear shot in from the right. (photo: reynoldslakeoconee.com)

Typical of how the size and dimension of the holes fit onto the beautiful property is the 231-yard 13th, a Olympian theater of a par-3 with a Volcano-type green benched into a side slope above a yawning field bunker.

The big finish from 15 to 18 includes a strong one-shot over a corner of Lake Oconee, a sturdy uphill par-4 with a million-dollar ornamental stream cutting in front of the green and a memorable sink-or-swim diagonal drive across an inlet on the 466-yard 18th. But Jones missed a spectacular opportunity here to build a dramatic, natural Cape-hole by putting large amoeba bunkers down next to the water’s edge where the fairway and green could have been. (87) 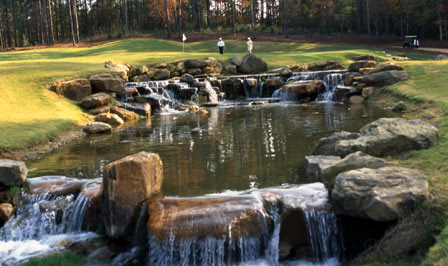 A closer look at that expensive water feature fronting the 16th green.