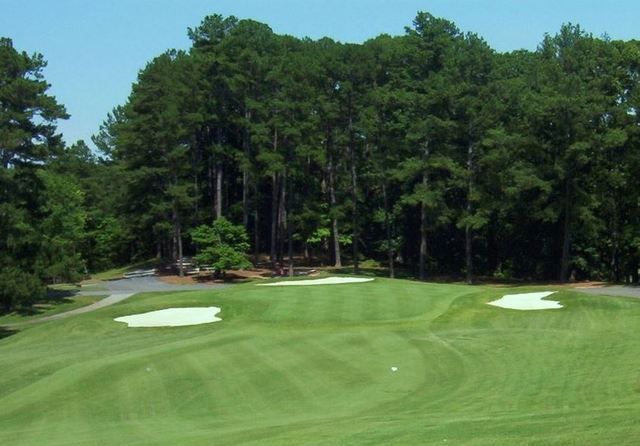 The design at Mystery Valley, near Stone Mountain about 20 minutes west of Atlanta, is attributed to Dick Wilson but I suspect his then-associate Joe Lee is responsible for pretty much all of this course. After a struggle with his health and alcoholism, Wilson died in 1965, a year before Mystery Valley opened, and Lee had been handling most of the firm’s work for several years before that.

The course wanders a beautiful property with holes that sweep up and down through long lanes of pine held together by a strong core routing that’s rich with doglegs and frequent changes in direction. It looks like iconic Georgia golf: if you knew nothing about golf here but what you saw on television, these fairways would feel very familiar. It’s also the closest thing I have to a home course in the Atlanta area.

The elevation changes aren’t necessarily severe but do pose some interesting challenges, like with the par-4 9th where good drives can travel too far across a plateau landing area and leave a downhill lie to an abruptly uphill green. The par-4 17th falls into the same category with approach shots playing from a low, canted landing area uphill to a blind and wickedly canted green that falls away from a hillside bench on three sides. And the drive at the long 18th must carry the crest of a hill but also avoid bounding down the right-to-left slope into the trees.

The wetlands and the lake pinch the landing area at 15 exactly where a good drive wants to rest.

There are some problems. The short par-4 third is wedged too tightly around a small retention pond. The 556-yard 14th rumbling around an uphill bend toward a severely sloped green is one of the nicest, most natural holes in the metro area, but it’s followed by one of the worst, the undisciplined downhill par-4 15th with two lakes that pinch a narrow landing area beginning at about 160 yards out.

The course seems so strong today because it was very good originally; my guess is that it was one of the best in the Southeast when it opened. It could use some updating, however, because it has the potential to be even better—in my world I’d give a local architect like Mike Riley the budget to redo the bunkers, enlarge and re-grass the greens and possibly cut down some of the slopes like he did at The Standard Club—but really this course is still tremendously fun and just fine as it is. (86)

The lovely downhill 8th has recently recieved a new green and bunkers.