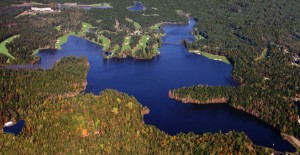 The Lake Course at Grand National is one of the Trail’s most attractive sites.

Many people consider this the best stop on the RTJ Trail. I’m not totally sure I agree but I wouldn’t waste any time arguing with them. Other locations have their strong points, but if you want to know what the Trail is all about visit here because there are bits and pieces of all its strongest suits incorporated into this one design.

Interestingly, the lake threatens nine holes on the “Lake” course (in this case, Saugahatchee Lake, a large, intricately meandering reservoir), whereas eleven do at the neighboring “Links” course. Go figure.

But the Lake manages to temper, without losing, some of Trails more exuberant and controversial traits, like three or four tiered greens, enormous landing-zone bunkers that hog fairway space, mind-numbing maximum yardages (only 7,149 here) and relentless inclines and declines. You get huge greens with huge contour but it’s not out of human proportion. I don’t know if I love it, but I respect it. This is solid, scenic and mostly strategic golf. 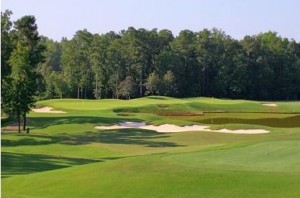 The short first hole, with an awkwardly positioned fairway bunker, is an inauspicious start, but the course takes off from there.

The routing makes several forays toward the shoreline on two sides of the lake but always returns to higher ground inland. In fact the holes that play away from the water are typically on the best land, including the par-4 5th, a kind of Bottle hole with a string of bunkers running diagonally across the fairway at the bottom of the valley floor: fly the short bunkers on the right and have a difficult approach over an elevated greenside bunker; or lay back short of the left bunkers and have a longer but clear approach. It turns classic risk-reward philosophy on its head but in the age of the 320-yard carry it’s a concept I’ve argued for. I also like the 14th where a centerline bunker in the first landing area can cause fits on what should be a reachable par five. (90)