I never saw this course prior to the 2007 bunker and green renovation but it couldn’t have been very interesting since it’s only marginally interesting after it. The property, in the middle of town, is dead flat with virtually no indigenous features to riff on (a drainage canal slinking through is the hazard highlight), and the repair budget wasn’t enough to really do anything with the fairways or turf. [Note: the greens were converted to platinum paspalum in 2016.]

Bobby Weed’s remodeled green complexes, however, are generally excellent and feel old and handcrafted. The asymmetrically shaped fill pads are infused with little tiers, wings and swales over chunky, grassed-down bucket bunkers. I would have liked them better if they were exaggerated one or two degrees more to really get the ball feeding and moving but they’re probably just right for a course that sees as much traffic as this one does. 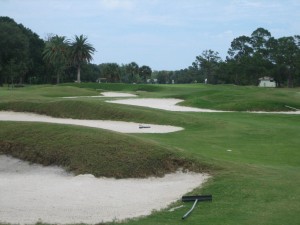 The last five holes are all strong, especially 15 and 16, a long par three running into an enormous elevated green with two deep flanking bunkers, and a 303-yard par four around a field of bunkers and a tiny, angled green. The 18th, which darts between a pond and the canal, would be even better if played as a long par four instead of a short five. Although he probably never visited, this is believed to be the last course Ross designed before he died, for what it’s worth. (82) 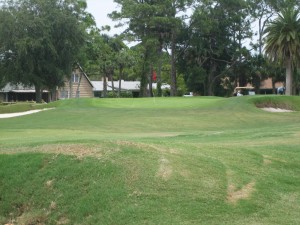 Setting up an approach into this tiny green.