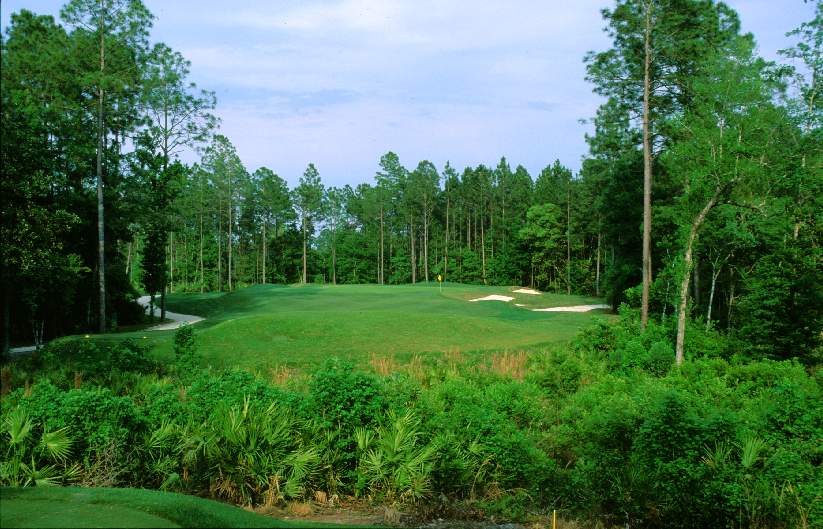 The tantalizing par-3 10th begins the most inspired stretch of holes at Fleming Island.

At first glance–from the road, the clubhouse, the scorecard–The Golf Club at Fleming Island looks like most 1990’s-early 2000’s Florida real estate courses. There seems to be a lot of homes, a lot of water and there are even the ubiquitous “display” holes posed over retention ponds along the entrance road that developers think will drive rounds and sell homes, though in this case they don’t whet the appetite as much as make you hope you didn’t bring along a case of the hooks.

But out in the field this is a different animal. While all around is typical Jacksonville junk land–flat, boggy, covered in pine–the design does a nice job of creating depth and movement. There’s a floating, amorphous quality in the greens shaping that reads hand-made, not industrial. Seen from the generous opening fairway, the putting surface ahead hovers against an indistinct backdrop and offers no clues to how best to approach it or what its interior contains, or the fact there’s a bunker rear left. Deception becomes Fleming Island’s most effective line of defense.

As you would expect from Bobby Weed, the greens can slip away into shaved swales on one or all sides and there are few formulaic X-Y axes in their orientations. The pacing and mix of lengths is engaged–no succession of 390-yard 4’s here, no pulling the same iron on each par-3–which would be fatal on a property so homogenous.

Weed makes great use of a small, marshy finger of the Black Creek basin poking into the acreage from the west, around which he crafts the best nucleus of golf on the lot. Five holes (10-13, and the par-3 17th) integrate the lowlands, skirting and jumping the wets under an intimate cover of pine. The best of the bunch is the 303-yard par-4 12th set on a diagonal across a field of swampy muck (or is that mucky swamp?), a tantalizing invitation of take-me made complicated by two bunkers that pop up exactly in the kiss but don’t commit zone. A definitive measurement of your onions the drive is. 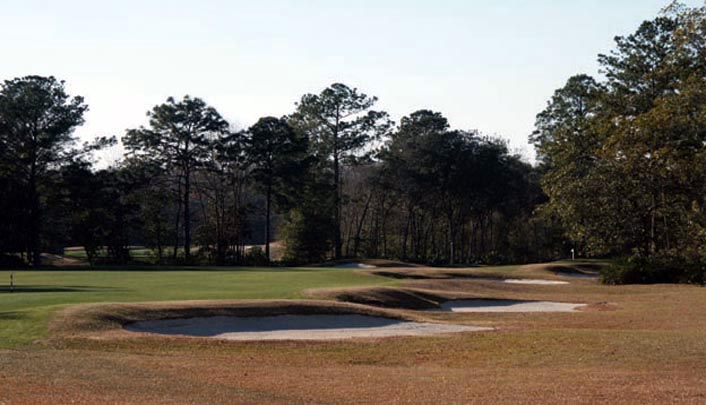 The sleek 11th forces you to take on these bunkers to get an angle at back left flags.

There’s a lot of public golf around Jacksonville, and most of it isn’t very interesting. After the high end (and high priced) resort courses, I’d put Fleming Island in my top three or four places to stop, and for the price I would frequently choose it over some of those more prestigious resort options as well. If you’re passing through the area on I-95, it’s a no brainer. (87)

The Golf Club at Fleming Island