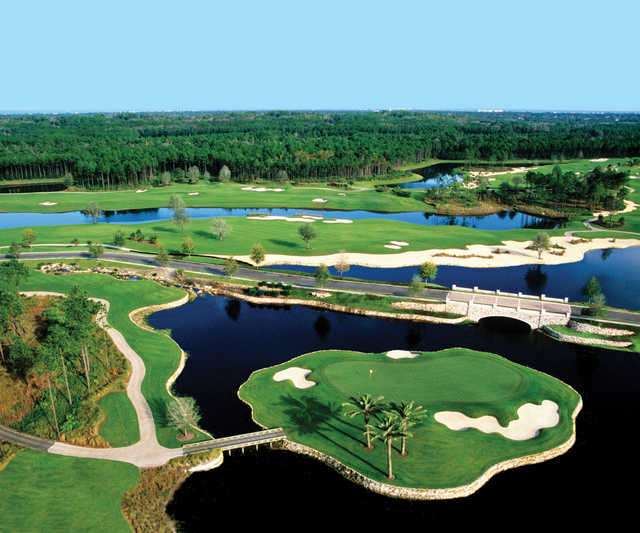 Tom Watson threw in everything, including an island green, into the Conservatory Course at Hammock Beach.

The Tom Watson-designed Conservatory Course and its elaborate “Crystal Palace” clubhouse, amenities to the Hammock Beach Resort, a few miles away, were built and opened, at extreme expense, just in time for the world’s economy to collapse and for owner Bobby Ginn’s resort and real estate empire to crumble.

The Conservatory is as busily shaped and contoured as any course in North Florida.

The Conservatory is on garbage land not far from I-95, a parcel of half-swamp/half cluttered pine forest ubiquitous to Northeast Florida. The entire site had to be gutted, filled and built-up—the same old nuts and bolts story for golf construction everywhere around these parts—but this course is about as ornately, and ornamentally, shaped as any I’ve ever seen. There’s nothing natural looking about the design, but then again you don’t want to try “natural” on this piece of ground.

Marshes or stone-walled water hazards are in play on every hole, and the design is continuously infected with all manner of bunker, from sunken capes and bays to sod-faced pots and what seem to be miles of intricately edged transition hazards. Trees, flowers and decorative grasses adorn the perimeters and some of the cart paths are brick-paved. There’s an island green too, the first hole built to showcase the development to prospective homeowners and members. (Is anyone impressed with that anymore? Apparently not—no wonder Ginn went bankrupt.) 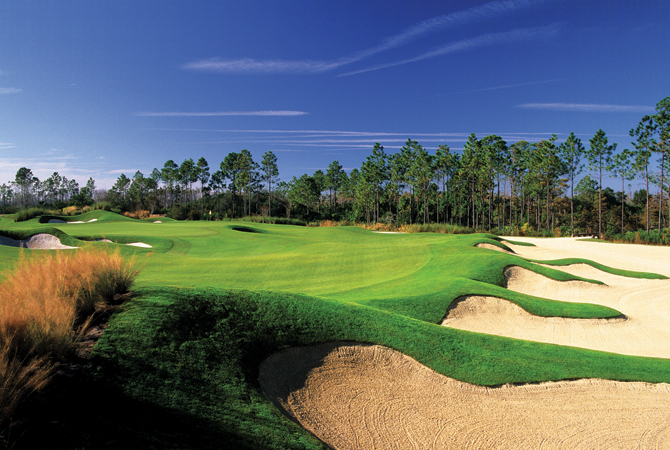 It’s a lot to behold, but severe bunkering and green contour, like here at the 10th, demand solid ball-striking.

It’s tempting to call this undisciplined, or incontinent design. But you could also say the design is an abstract or neo-modern exercise, executed by an architect with supreme confidence. It’s a course, designed by a playing professional, that attempts to deal with the realities of the game in the 21st century on a piece of land that offers no help. The size alone qualifies as futuristic, nearly 7,800 yards from the tips and a stunning 78.4/155 rating.

This is not intended as a defense or justification for the aesthetics—it’s too overwrought and goofy in places to be considered great. But the hole structures are actually quite rational: wide, molten fairways with red-light and green-light sides and hazards that promote shot-shaping.

The un-level lies force you to hit a variety of shots into escalated greens with severe roll and false edges pitching steeply into hollows and bunkers (number two!). Ten is a fun, flamboyant par five, and the stretch of par fours from 13 through 16 brings out about all you could ever conceive in terms of shape, construction, bunkering, orientation and length.

Ultimately the greens are so bold and fortified they command respect (although pros will hate them), and if you’re going to build a big budget golf course in a swamp, you might as well go ahead and build it. Watson certainly didn’t leave anything in the bag on this one. (90)

The Conservatory at Hammock Beach Resort