Brazell’s Creek, part of the Georgia State Parks Golf Course system and located between Macon and Savannah, is really two separate courses. The original nine is a bucolic but very basic nine holes that slides back and forth through the pines trees of a modest state park. The second nine, opened in 2008, can be found only after driving across a 2,000-foot cart path to an old hay field northwest of the park. The new section is brawny and almost bereft of trees, buffered by washes and waste bunkers made from the site’s excavated sand. 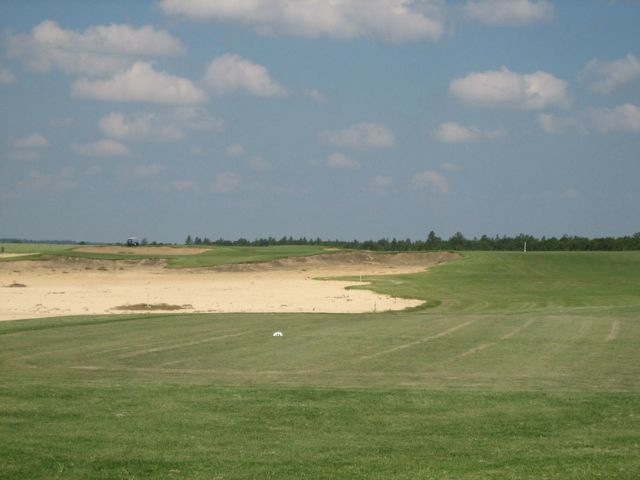 The new nine, opened in 2008 and full of unfinished potential, features vistas similar to this throughout.

You play the first seven (old) holes, then trek out to the clearing for the new nine, returning again to pick up the final two holes. Out in the fields the wind is a serious consideration and the routing turns in all directions to expose it. Wind, a superb rise and fall in the land, sand blowouts and transitions–it’s completely unexpected. Where did this come from?

The potential of this new nine, or at least the landscape, is a tease. But it turns out the state was onto to something. Most of the soils in this lower section of Georgia are sand, and the holes here are only about two miles from the Ohoopee River. Less than 20 miles north, on a similar sandy site, is Gil Hanse‘s Ohoopee Match Club, an elite private club opening in 2018. The topography is good enough to turn the area, maybe, into a national golf destination. Brazell’s Creek realized it first.

There’s a gambit in nearly every hole. If you choose to cut across the wash, the ninth is a drivable par-4. The 14th and 15th use a tree-filled gulley heading a small tributary to Brazell’s Creek to strategic–and penal–effect. The par-3 15th is a ball buster calling for a straight shot across the sunken chasm, and 14 curves aggressively around the pit and waste bunkers. Big hitters can try to cut across a flash of sand for a shorter approach but the rest of us have to play long enough down the right to have an open view to the green on the other side of the gully. 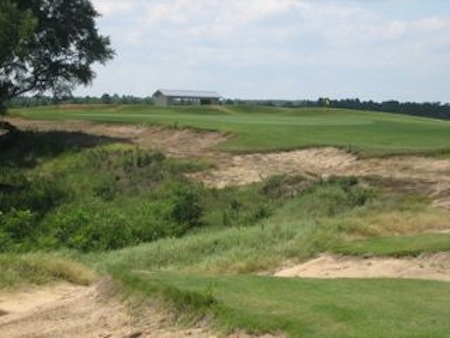 The par 4 14th uses a sunken gully to protect both the drive and the approach.

It doesn’t appear there was money to really finish the holes aesthetically. Right now the look is quite basic and half-done. More detailing around the edges of the bunkers and waste areas would make them look less cut and more eroded as the landscape suggests. Wind and time will have to do that job.

Hopefully over time the native grasses will mature in the roughs to form buffers between the holes. I also would have liked a little more personality in the green contour. But then again, if the state had the money for any of that they probably would have scrapped the old course altogether and built 18 new holes in the sandy hay fields (there’s room). Then we’d really have something to talk about. (84)