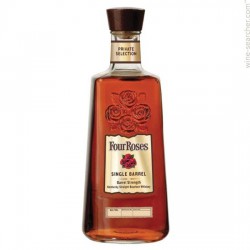 Four Roses is known for using different combinations of mash bills and proprietary yeast strains to produce bourbons that yield a surprising range of flavor profiles.

The recipes are indicated in four-letter strands on the private barrel bottles. The “O” means the bourbon was distilled at the Four Roses distillery in Lawrenceburg. The second letter indicates which of two mash bills is used — in each of the bottles tasted here, the “E” indicates a higher corn/lower rye bill (versus “B” which is higher in rye). The “S” is a standard statement showing it is a “straight bourbon,” a legal term.

The last ingredient is where the bourbons really become interesting. The letter stands for one of the five different yeasts used, each giving the bourbon a different character, like bold spices that distinguish different cuisines.

The “F” yeast imparts herbal notes. The “Q” yeast in the second bottle adds a floral essence (according to the distillery). Other yeasts add different elements, from fruit to spice.

It’s remarkable how different these two are, even with the same mash bill. The “Tower” bottling leads with baked pear and apple notes, mulling spice/cinnamon and maple. It’s tough to get your nose out of the glass. The palate is full and round, easygoing with apricot and spice coming in at the edges. Rye and more savory spice rolls in at the end. This is really a style of bourbon I can get on with and shows similarities with the Four Roses Small Batch but with added depth and profundity.

The “DPS” bottling is another animal as aromas of wood, sugar, candy corn and grain give way to impressions of forest floor and beef. It’s higher-pitched on the palate with sharp rye spice, heat and wood dominant. Vanilla starts to poke through eventually, and a little water honeys it out, adding a welcome bit of sweetness to balance the spice. Banana shows up late to the game. I would have associated it with the higher 35% rye “B” mash bill.

Standing alone the “DPS” bottling is a bold, attractive sip, but side by side with the more lush, inviting “Tower” bottle it comes across as slightly lean and aggressive.