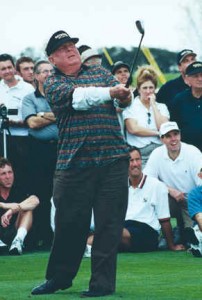 Moe Norman put in his time to "trap" his accurate swing, hitting upward of 1,000 balls daily.

Among the thousands of stories about Moe Norman, the late eccentric genius of golf, is a nugget that exemplifies just how precisely he could hit a golf ball.

Moe was playing with the late Ken Venning one morning in Florida. Unable to hit balls before they teed off, they hit three balls each off the first tee. As they made their way down the fairway, Venning said it looked like he was walking toward a mushroom in the middle of the fairway.

As he walked on, he was shocked to see Moe’s three balls—touching.

So how did Moe become arguably the best ball-striker in the history of the game?  Between the ages of 14 and 19, Moe worked obsessively on his swing, hitting upwards of 1,000 balls a day until he had his move “trapped.” He built up calluses so thick that he had to cut them off with a knife to hold a club properly.

According to Malcolm Gladwell, the author of the runaway bestseller Outliers,  Moe did what enormously skilled people have always done: he put in his time.

To become a master at anything, Gladwell argues authoritatively that you need to put in 10,000 hours at that skill.

So there it is: If you really want to get better at this game, you have to put in the time. It’s that simple.

Of course, that’s not what most golfers want to hear. The overwhelming majority of golfers desperately want to get better—there’s an entire golf instruction industry based on that desire.

However, despite taking lessons, practising, consuming books and magazines, the overwhelming majority of golfers do not improve.

Most novice golfers, if they’re eager and take lessons, find that they can become fairly competent in a few years. But then most golfers plateau. No what they appear to try, they cannot make that jump to the next level.

And that leads many golfers to believe that once you’ve established your swing—no matter how flawed—it’s almost impossible to change it.

Teaching professional Todd Graves has some insights into this. He says hitting a good golf shot sends a shot of pleasure to the brain. Golfers want that “hit” which is accentuated when they are playing the game.

“When you’re trying to improve, it doesn’t feel comfortable, and it actually makes you feel bad,” says Graves, a close friend of Norman’s.

“Moe said he practised so much because it made him feel good. It gave him joy,” said Graves, who will coach the actor who plays Moe in the upcoming Hollywood movie about the legend.

But Graves says that golfers can improve: you just have to put in the time.

According to Graves, you don’t need to hit thousands of balls to improve. Just putting in dedicated time–even at home or in the office–can make a mammoth difference.

To overcome a bad habit, Graves says you have to reprogram your mind and body. Mainly it’s matter of moving into the correct positions. Graves advocates isolating particular moves, and repeating them “over and over” for months—daily if possible.

Eventually, you will “trap” the correct move, and it will integrate into your overall swing which will gradually improve.

“There is no quick fix,” says Graves, who operates the Graves Golf Academy in Orlando, Florida. “Learning anything takes time and repetition.”

Tim O’Connor is the author of The Feeling of Greatness: The Moe Norman Story.