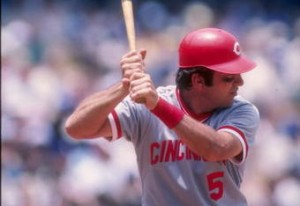 Here at The A Position we’re given a topic to address (or not) each month for The A List feature, in a neat 150 words or so. The November challenge was to offer our assistance to Presidents Cup captains Fred Couples and Greg Norman in naming celebrity co-captains that might really get the boys going this week in Melbourne. We even enlisted the guest services of baseball Hall-of-Famer Johnny Bench in taking a swing at the question.

Click here to see whom Johnny and my colleagues put forward–not all of them actually living, mind you. My contribution follows, and naturally I’d be willing to tee it up with my picks anytime, anywhere.

I’d go with Cate Blanchett for the Internationals and Cameron Diaz for the U.S. squad. And it’s even possible (if not entirely probable) to look beyond the usual sexist reasons, though there’s no denying that both are babes.

Blanchett is an Aussie, which will lend her beaming smile home-court wattage in Melbourne. And it’s not like she’s never had a club in her hand: In her role as Katherine Hepburn in “The Aviator,” Blanchett did her actorly training for a golf scene with Leonardo DiCaprio as Howard Hughes, not that we ever quite detect her swinging the club:

As for Diaz, she’s been quoted as saying that golf is more addictive than crack cocaine. True, not a slogan Fred will want to sew onto the team blazers, yet indicative of her magnetic zeal. But should boyfriend A-Rod (shown with her, left) join her down under, Fred should keep him away from the practice range: Last big swing A-Rod took was a whiff. 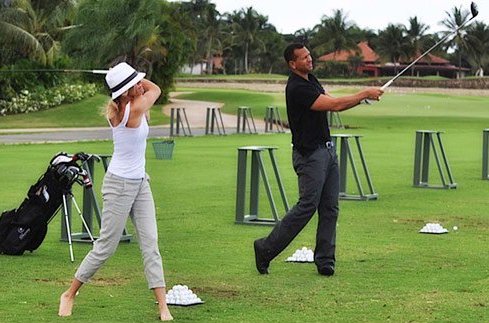 Cameron Diaz and A-Rod at home on the range

Bonus question (for which I have no answer): Anyone recognize the course/resort the beautiful couple is practicing at?