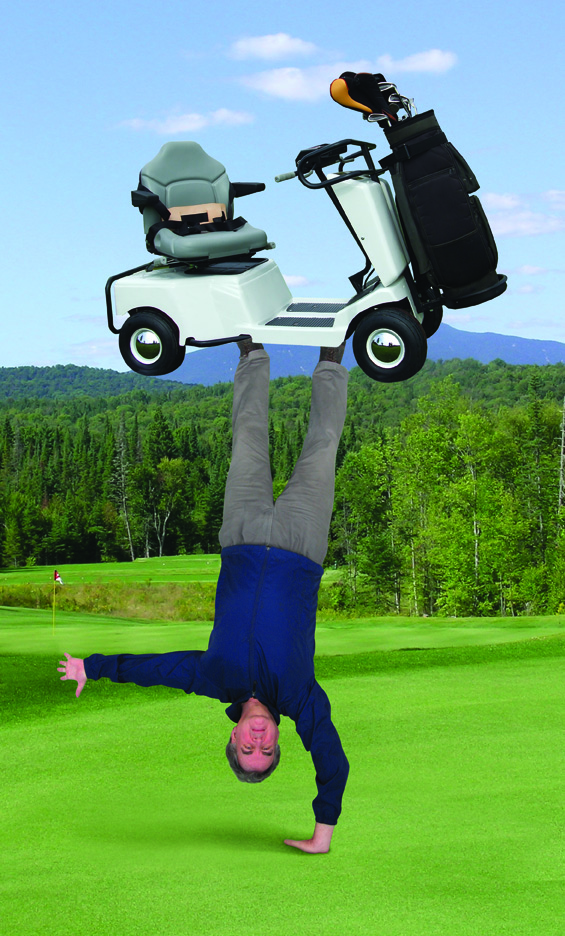 In the year of his grieving, 2001, Scott Willis would hop in his car and just drive south from Brattleboro, Vermont, on Route 5, the back road through Guilford, into Bernardston, Massachusetts, Greenfield, Deerfield, as far as he needed to go until his equilibrium returned. Then he’d turn around and head home. His father, Ed, had died that June, and then the shock of 9/11 just compounded the dislocation.

Golf had been a big part of Scott’s childhood in Walpole and Keene, New Hampshire. He would caddy for his dad and mom, he and his dad would play together occasionally, and the pair would frequently watch golf on television together. For a time hardly a spring or summer day went by when Scott and his friends weren’t playing or caddying out at the nine-hole Hooper Golf Course in Walpole. But he essentially quit the game after ninth grade, to concentrate on baseball, music, girls.

By 2001, he had barely played a half dozen times in 35 years. Then one day, motoring between Bernardston and Greenfield, he decided to stop at Sammy K’s driving range and hit out a few balls. Another day he veered over to the Northfield Golf Club, went to the practice green in a medium to pouring rain and just stayed out there, putting. “It felt good,” he recalled recently. “I liked it.”

He played a few times at Northfield in 2002, then joined in August. The next year he signed up at the Brattleboro Country Club, where he is still a member. “Not long after I resumed playing I realized it wasn’t a big step from there to putting my two loves together.”

The other love is yoga. After a varied career path as a musician and academic counselor, Willis took his first yoga class in 1987, when he was 35, “And it all immediately felt so good, physically and emotionally.”

It still does. The way Willis puts it to his students–he has now taught yoga since moving to Brattleboro in 1992–is that, “Yoga is like a well I can always go to to get water. And for me, golf is yoga outside.”

From the Sanskrit root, yuj–to bind, or unite–yoga is the ancient means to unite mind, body and spirit. How this is done can be interpreted in a bewildering number of ways, not a few of which Willis has studied. “Yoga is about postures, breath work, meditation and philosophy. I think of it as a practice of three things: gratitude, loving kindness and forgiveness, mindfulness in daily life. There is a spiritual component to it; I encourage people to connect to whatever that means to their deeper selves. “ 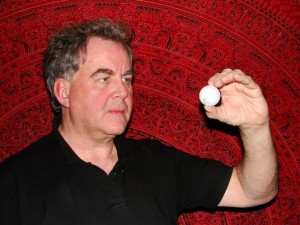 But his classes–particularly his Golf Yoga classes–are laid-back and easy-going, conducted with a sense of humor, urging students to go at their own paces, to the comfortable edge of a stretch or yoga pose.

“I tell students yoga is an oasis of time where they’re not responsible to or for anyone else, with no need to impress anyone in class or the instructor. Pretty much like a round of golf.” Willis finds golf such an opportunity to really focus that he has occasionally put together “Meditation in motion” foursomes that play for nine holes in relative silence.

He doesn’t teach golf technique. The Golf Yoga classes he conducted over the last four years consist of six dynamic stretches and nine static stretches–some classic yoga postures like Warrior, Dance, Willow with golf club in hand–all at a relaxed pace. In place of meditations that might begin and end typical yoga classes, Willis plays taped excerpts from the likes of golf psychologist Dr. Bob Rotella, and might wrap up a session with a Jim McLean video. 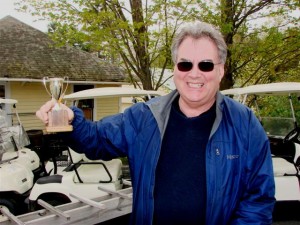 Scott holding the coveted Be the Ball Scramble trophy

Ten weekly sessions culminate just about the time the golf season opens in Vermont–and then it’s time for the Be the Ball Scramble for all current and former students.

Does it help? “Using myself as an example,” he said, “I was a 24 handicap when I started playing again. I’m a nine now.”

But he’s not stopping there. He suspended the class in 2010 in favor of giving private lessons, going a little deeper into the sports psychology angle, but he’s taking them up again early in 2012.

“The idea is to maximize the enjoyment of the game. It’s like Bagger Vance says (in Steven Pressfield’s novel)–through focusing one can experience levels of awareness deeper than usual.” If we play to the level that our subconscious lets us play, then we need to convince the subconscious to let us play better. And to that end Willis has created methods for players to become more factually aware of their games, and affirmations that help them visualize playing better.

In his own case, he’s created a precise scenario that has him shooting a 68 on October 15, 2013, thereby lowering his handicap to four. He won’t promise this will happen, but for now he’ll admit no doubt about it, either, merely commenting: “Check back with me then.”

More information on Scott Willis and his Golf Yoga classes can be found at Hits the Spot Yoga; he can be reached at Scott-willis@comcast.net, or (802) 257-1926. 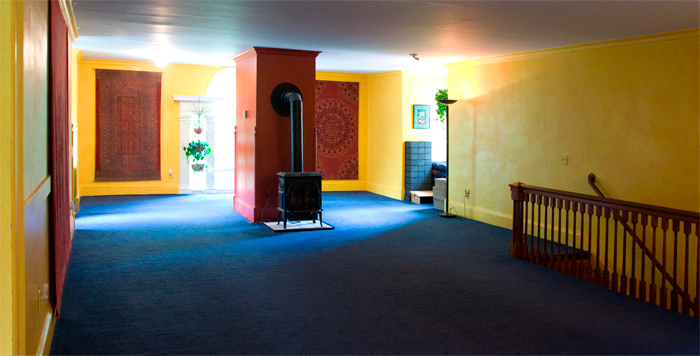 How golf and yoga went down in the desert during the Golf Road Warriors Scottsdale trip, “The Golf Yoga Connection” here.

2 Responses to “The Yoga Oasis”