[<<Previous post on the Festival: All in the Family]

The Festival of Beer grew out of the success of the Kohler Food & Wine Experience, which will unfold for the twelfth time this October. The beer event has an equal emphasis on food and education beyond mere samplings of brew–though there is ample opportunity for that as well.

According to Teo Zagroba, Kohler’s beverage manager, “Even before the official opening keg tapping keg there’s the first of two beer and chocolate pairings with Kohler’s chocolatier, Peter Clemens [left in photo below], and Anello Mollica from the Central Waters Brewing Co.” 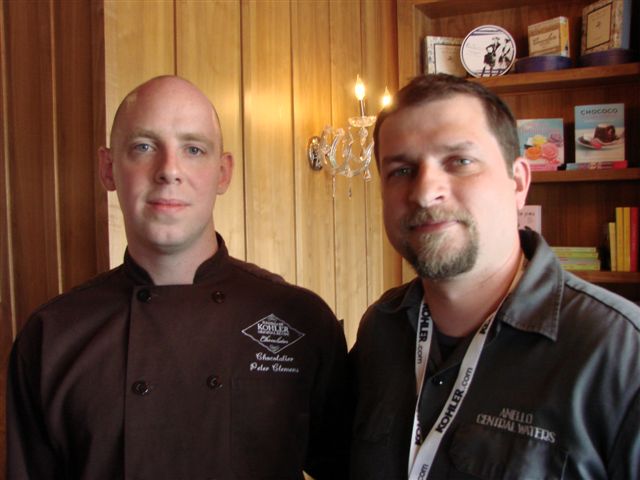 Attendees can go to one event or as many as can be squeezed in. (Sadly–and I checked–it would physically impossible to attend all of the events.) Pricing is a la carte for each session, with daily and all-weekend pass packages, and deals for those who stay at the resort.

“We’ll have about 16 total events people can attend; it’s growing each year,” said Zagroba. The festival has increased in attendance by about 500 people each year, meaning a gathering of more than 2,000 is anticipated for 2012.

There will be plenty of live music, beer buffets, a cooperage demonstration, a five-stage tasting of barrel-aged beers from La Trappe, the Trappist brewery in the Netherlands. In the lavish Kohler demonstration kitchens chefs and brewers will work together on recipes that use beer as an ingredient, or match up well with a particular brew. 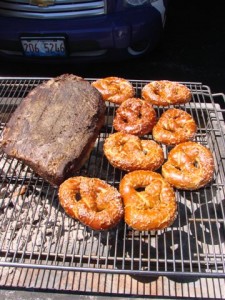 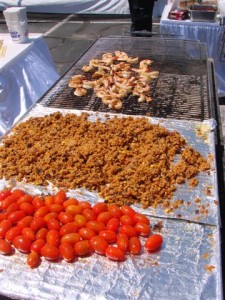 This takes on a more active al fresco approach on Sunday afternoon’s Shorts and Chefs, actually the festival’s last event, when regional chefs grill a meal to complement certain beers. “We’ll pick out the beers for them,” said Zagroba. “Then we basically just give ‘em a bag of charcoal and turn ‘em loose.”

Today alone can take one from morning (Eggs and Kegs–a breakfast buffet with beer samples) to late-night orders from the taps at the Horse & Plow bar. I’ll see what I can do, since I’m devoting today to beer–no golf.

But the main event is Saturday night’s Cheers to Beers tasting, with over 30 breweries pouring over 200 different beers. Attendees are given a booklet to keep tasting notes, and a ballot to vote for their favorite brew. This turns out to be good for the winning brew–Goose Island’s Bourbon County Stout in 2011–which thereby secures a tap handle in the Horse & Plow as the summer’s featured beer.

There’s a lot more than beer going on at the Cheers to Beers event. It’s also a showcase for regional artisan cheeses, specialty foods and pastries. And the very venue, the Kohler Design Center, is a showcase that gives the visual proof of the company’s bent toward gracious living. (Patrons spiff up a little more for this event as well.)

Toward the back of the building is the Great Wall of China–towers of bathroom fixtures from Kohler’s past soaring two stories high. It’s an impressive sight, and certainly one of the more unique sites for a beer tasting. But be advised that Kohler personnel have heard every possible variation on the not-having-a-pot-to-piss-in shtick. The temptation will be great, but best to let that one go. 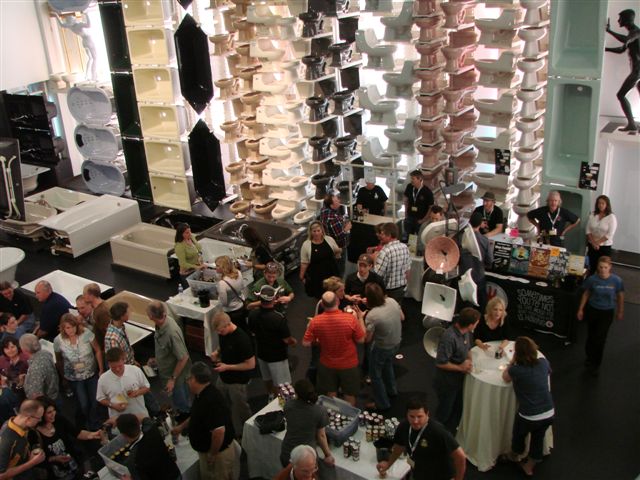 [>>Next post on the Kohler Festival of Beer: Blackwolf Run Beer Challenge and Million Dollar Shootout]