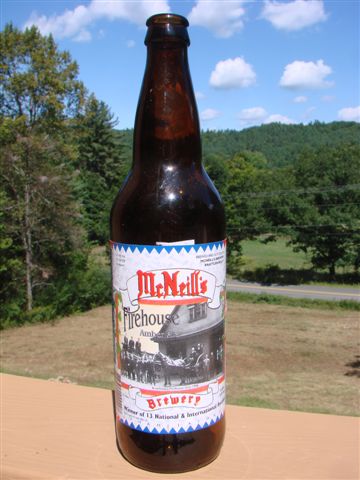 True, I sometimes drink only one bottle of the TAP Beer of the Week in a week’s time, if that’s all the supply on hand. And sometimes I drink multiple bottles throughout the week. But if ever a beer was worthy of the TAP Beer of the Week designation on volume alone, this is it, a keg of Ray McNeill’s best-selling beer, first imbibed on the happy occasion of my daughter Jennifer’s wedding on July 31, to Glenn Brunetti.

Well, it was hard not to be happy–the weather was beautiful and so was the bride, everything went off without a hitch (except for the conjoining couple), and the site was the Holyoke Merry-Go-Round at the Heritage State Park in Massachusetts. Shortly after the ceremony was over, the carousel rides began.

Having been given the portfolio for beer for the nuptials, I was as fearful of running out as my wife was of running out of food at the rehearsal party she was cooking for. Lynn is of Italian descent, so her irrational fears are ingrown. I had only my credentials as Minister of Beer on the line to prod me into grossly overestimating just how much drinking was going to be done.

How much beer? was actually the second question, following What kind of beer? Not everyone is a beer snob like me, or as much of a hophead. At a local distributor Lynn had run across a great deal for mixed cases of Belgian beers, including Leffe Blonde, Hoegaarden White and Stella Artois, a mix that could have pleased anybody. She cursed herself for not buying ten cases on the spot, because when I called a few days later the deal was off the table for the simple reason that all the beer was gone. 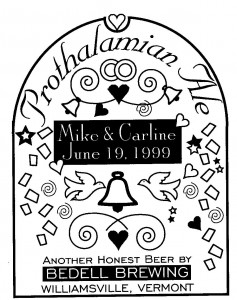 I was cursing myself because I had somehow frittered away the time to brew a beer for the wedding. I had been thinking: Let’s see, if I try a test batch two months before the wedding, I’ll still have time to make one for the day itself. Then it was: Okay, forget the test batch, I still have three weeks to produce a drinkable ale. Finally, I had to admit there was no way to put a Prothalamion Ale on the tables in a week’s time.

I brewed over 100 batches of beer in my day, but that day was quite awhile back. The last batch of beer I brewed was for the wedding of my son, Mike, to Carline, and they now have three children, the oldest (Nate the Great) now nine. The label, as almost all of my beer labels, was created by Jen. (For those wondering, a prothalamion is a nuptial song, or poem, as is an epithalamium.)

When I finally came to grips with that bungle, I set my mind on bringing five gallon logs or a half-barrel keg (15 gallons) to the wedding, and felt I didn’t have to look much further than McNeill’s in Brattleboro, just down the road a piece. 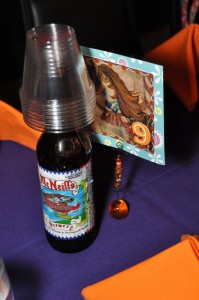 Ray makes a beer once called Big-Nosed Blonde, now called Blonde Bombshell. I’m not being uncharitable (especially since Jennifer herself mentioned it), to say that either name might have applied. Both Jen and her mother have proud Roman noses. And Jen was never more of a blond bombshell than on her wedding day.

The only problem was that Ray didn’t have any in the pipeline. His ESB would be too much of a hop attack for many; I had to go a little more middle of the road. He gave me a bottle of Ruby Ale to try to see if I might want to go with that, but I settled on a five gallon log of the Dead Horse IPA for the Friday night rehearsal dinner, and a keg of the Firehouse Amber for the post-wedding festivities.

Ray had told me, “In a perfect world, there will be 40 pints in a five-gallon log, and 128 in a keg.” His caveat–that it’s not a perfect world–led me to the error of bringing some more bottled beer to the rehearsal party and, having scored a case of Blonde Bombshell bombers at the eleventh hour, putting a bottle of that on each table at the wedding. 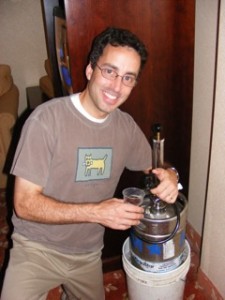 Mike with the Dead Horse IPA

Mike had taken the Dead Horse to his hotel room on Friday night, and I gather he and my nephew, Doug, had a good go at it. But there was still plenty left over. 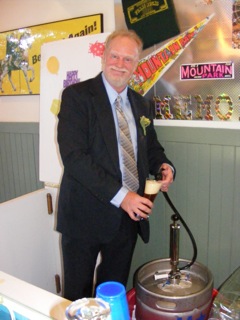 Setting them up from the everlasting keg

The keg situation was even more ridiculous. Though I was personally pumping some out after the (lovely) ceremony, I still needed help lifting the thing into the car at the end of the night, and used a luggage trolley to get it up to Room 317 in the hotel.

“Come get a beer in Room 317,” was the mantra for the night, and after a rather lengthy session in the hotel bar a few hardy souls did, until Lynn kicked them out so we could go to sleep.

I had until the end of the week to return all the beer hardware to Ray, but what about all the software–the leftover beer? Our old friends Joan Rockwell and Eric Singer stayed with us for three days after the wedding, and Eric and I had our share, along with leftover sausage and peppers we happily ate for three days running. Nephew Chris Allen came over to fill a few pitchers. But it was the softball team that really helped, since I took the keg to both days of a state tournament we played in.

Particularly after we were eliminated, the Mocha Joes (and members of a few other stray teams), put a good dent in the gallonage. The only requirement for filling one’s glass was to toast Jen and Glenn, whose marriage should now be heartily well-blessed. 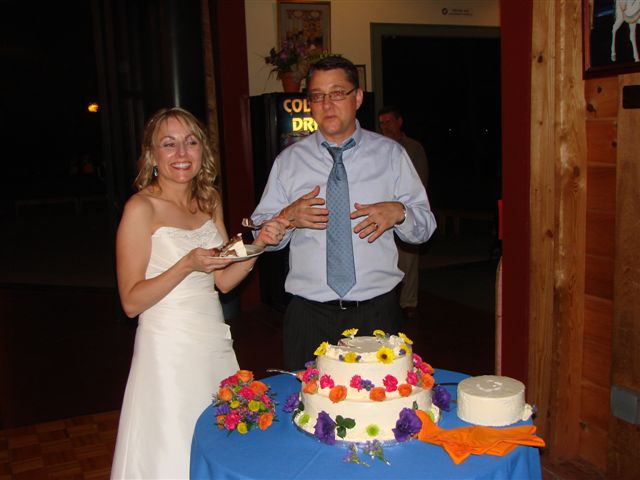 The bride and groom, having fun 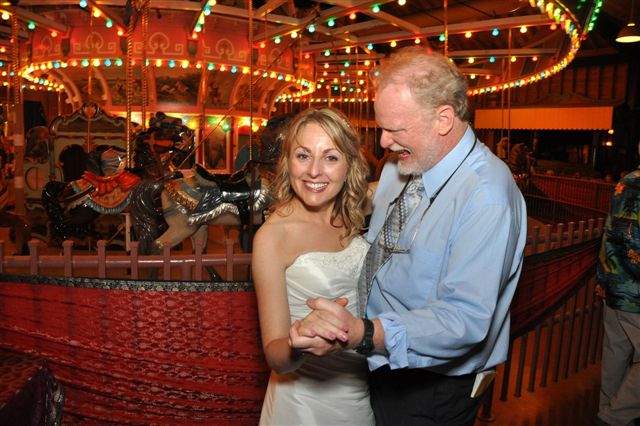 Dancing with the bride

2 Responses to “TAP Beer of the Week 31: McNeill’s Firehouse Amber”