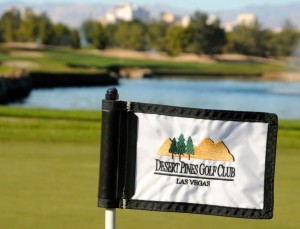 I took away three quick lessons from today’s round at the Desert Pines Golf Club, our last in this whirlwind Golf Road Warriors extravaganza:
1) The three courses in the Walters Golf Las Vegas portfolio couldn’t be more different from one another;
2) I need to work on my sand game;
3) I need to work on my mower technique.

Let’s review. Our opening round in the Walters Golf whirligig was at Royal Links, a wide-open affair in the style of the Open Championship rota holes it replicates. The second tilt was at Bali Hai, a bounteous, fecund, palm-laden track that was a tropical joyride.

Desert Pines is a third animal, a Perry Dye effort that seemingly transports a low country golf experience into Nevada–the pines of Vegas. (Roughly 3,000 pines were transplanted here before the course opened in 1997.)

All of the Walters Golf courses are geared more toward the traveling player than locals, with plenty of packages available*, and we showed up right before the tournament shotgun sounded for a large group of South Korean golfers.

Nonetheless, our group took off in a large caravan—a sixsome to start—the four Golf Road Warriors joined by Walters Golf sales directors Brennan Blednick and Jimmy Schwarz, both of them sticks. And we had a gallery of other Walters reps, including general manager Joe Dahlstrom, director of marketing Josh Hill and superintendent Erik Ostlund. Talk about an entourage!

Part of the reasoning for this—other than getting the staff out of the office for a while—were the skills challenges to come. In light of fellow Warrior Aubrey McCormick’s experience on the Golf Channel’s “Big Break Atlantis” our hosts had set up a few competitions for us. This wasn’t outside their ken—“Big Break II” was contested here.

So we set out on the third hole, jumped around the course a bit, and frankly never got back around to playing the opening holes. But it wasn’t hard to get a feel for Perry Dye’s skill in laying out a course on a relatively small plot, threading tight fairways through the pines with ample mounding between holes to shield players from hubbub elsewhere, and maintaining ample length, 6,810 yards from the tips, 6,464 from the middle tees.

Ostlund said conditioning on the course had gone through a ragged period, leading to a complete renovation toward the close of the 2007 season. Mission accomplished, down to the all-new bent grass greens rolling like rockets.

I had put a brilliant three shots together on the par-5 seventh hole when the first skill shot challenge came up. Okay, though it was a little like having the blackjack dealer drawing five cards to 21 while sitting there with two kings; my reasonable shot at birdie was swept off the table.

We pegged up on the back sixth tee, but turned around to fire between the seventh and ninth greens over a pond toward the distant eighth green. I frankly forget who took the closest to the pin honors here, I just felt lucky to stay on dry land.

Playing down the brawny 425-yard twelfth hole it dawned on us that there were concentric circles on the green surrounding the hole. Time for the next challenge, a total of five shots from the many bunkers guarding the hole, from short to long, downhill to uphill.

I was tied for the lead after three shots. But anyone betting on me would have tanked, as I did on the last two swings. The short odds going in were on Aubrey, but Jeff Wallach upset the field, running from the back of the pack to take the honors. 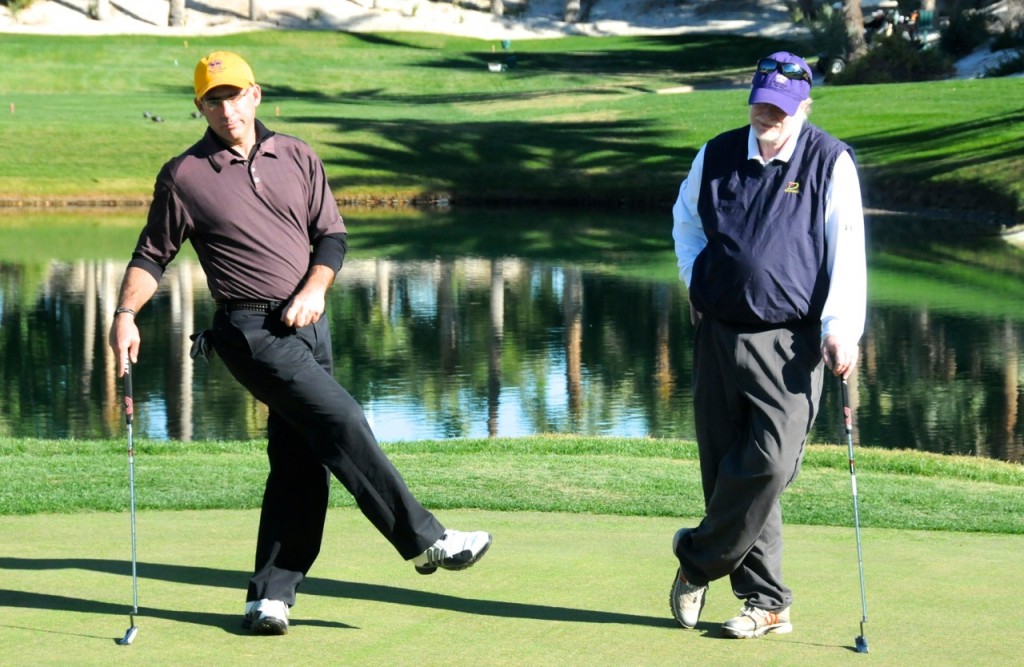 I finally did get that birdie on the short par-4 fifteenth, called “Little Poison” because it bends around a huge pond hugging the right side. But the last skill challenge didn’t involve any clubs at all.

The curious can check this out in Jamie McWilliams’ “Desert Pines Overview” video here on the Golf Road Warriors site. I did, and now I’m thinking of filing a protest. It can clearly be seen, in the critical putting green mower race between Robert Kaufman and me, that someone jumps in and adjusts Robert’s throttle, helping him overcome what should have been my insurmountable lead.

I’m pretty sure there’s something about “outside agents” in the rulebook, albeit the rulebook doesn’t really cover mower races. (To answer the burning question on everyone’s mind, the mower blades weren’t spinning.)

Maybe I should have said something then and there, but our whirling dervish of a Golf Road Warriors trip was spinning to a close. We went directly from the course to the airport to head our separate ways home. But to the question golf writers often ask, “Don’t they know who we think we are?” the Walters Golf team had the answer: “Yes we do, Golf Road Warriors, yes we do.”

Out front was a stretch limousine about as long as the Colorado River. So we stretched out, feeling like we’d drawn to an inside straight, the kings of Las Vegas. Well, not the King, of course.

Birdie hole! No. 15 at Desert Pines

*Speaking of deals, Walters Golf is holding a Black Friday/Cyber Monday 72-hour sale that is cutting prices at least in half for play on any of their courses from December 3 to March 31. Check here for details. But only 500 rounds will be sold, and last I checked they were already rapidity approaching the 400 mark.