As a journalist frequently reporting on golf travel I’ve stocked up on my share of frequent flier miles. But I know quite a few colleagues who have burned through more passports than I ever will. John Steinbreder may lead the pack.

As the author of 19 books and countless articles for the like of Sports Illustrated, Golfweek and now Global Golf Post, Steinbreder has taken his single-digit handicap around the globe. I know he’s at least one continent ahead of me by reading From Turnberry to Tasmania: Adventures of a Traveling Golfer (Taylor Trade Publishing, $22.95). 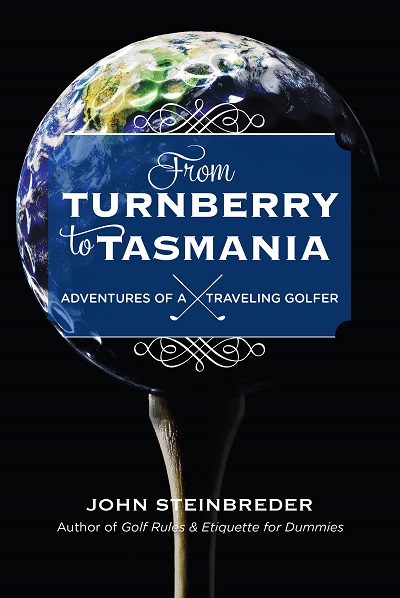 The title is completely accurate. The book begins at St. Andrews and makes stops elsewhere in the Old World in the expected golfing grounds of Scotland, Ireland, England, Wales. But he also leaves divots in Portugal, Switzerland and Italy.

Back in the colonies Steinbreder makes pilgrimages to our usual shrines at Pebble Beach, Pinehurst and Kohler for starters. Then he hunts pins in Nebraska, Colorado, New York State, the low country of the Carolinas and both ends of Canada.

And why stop there when there’s golf in Australia, Nicaragua, Columbia, Morocco, Fiji and elsewhere?

Steinbreder is a wonderful traveling companion both here on the page and in real life, and hence my disclaimer: John is a friend. I’ve played more than a few rounds with him in some of the places he writes about here, bellied up to a few of the same bars where we’ve torched a few cigars, and tucked into some of the same voluptuary meals he describes.

So it was something of a relief to not find myself looking back at myself from a tipsy angle on the page. Although that’s one of two mild gibes I would level his way. Despite references to playing partners and good company in the many rounds and courses alluded to, there’s little depiction of any social intercourse; the impression is that Steinbreder could have been out playing solo most of the time.

A literary decision, no doubt, to avoid a bulging tome of personal anecdotes. Likewise the exclusion of a single traveling mishap. There’s nary a missed train connection, lost baggage (or worse, one’s clubs), or a single bad clam. All the meals are great, all the local drinks invigorating, and all the golf with its own distinctive charm.

But these are quibbles. Why include the destinations otherwise? The only serious thing nagging at me and likely to beset other readers is one of the deadly sins: envy.

Better just to enjoy the trip as Steinbreder supplies details of 26 golfing destinations along with worldly cultural, historical, musical and natural allusions. To tamp the wanderlust, it might be best to read the book episodically, while waiting for one’s own passport to be renewed.

Whether you take your game to Turnberry or Tasmania, another old saying prevails—wherever you go, there you are. Meaning that there’s no escape from where your golf is really unfolding. It’s all in your head.

Though he was speaking mainly of competitive golf, Bobby Jones had it right for any player when he said that the game takes place, “…mainly on a five-and-a-half-inch course, the space between your ears.” 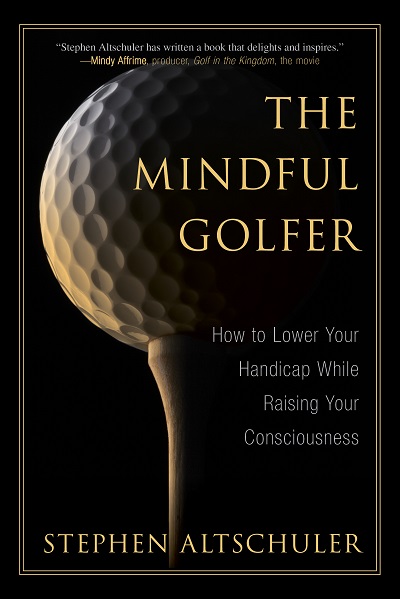 Jones was not a Buddhist, but Steven Altschuler would probably give him a free meditation mat for the sentiment. The latter’s new book, The Mindful Golfer (Skyhorse Publishing, $24.99) is all about the game as it’s played on that five-and-a-half-inch course.

Altschuler is a student of Buddhism, a mental health counselor and a long-time golfer. He combines all of that experience and his writing talents here to try and help us be better golfers and, hey, while we’re at it, better human beings.

The subtitle is “How to Lower Your Handicap While Raising Your Consciousness,” which may immediately sound intimidating to some. Have no worries. There’s no need here for renunciation or sackcloth and ashes.

Altschuler is certainly trying to help golfers get in a better frame of mind using Buddhist constructs, but he manages to do this with the greatest good humor and a complete lack of cant, as this one brief passage might suggest: “…the [golf] course is not only a place of fun and relaxation but also a place of high drama. And you’d better have your proverbial shit together if you want to come out of the experience with any modicum of self-respect and pride.”

Altschuler was once a good enough golfer to consider turning pro, but another life path was (maybe) preordained for him. Anyway, his game suffered. But that only underlined one of Buddhism’s Four Noble Truths: “…all human beings suffer, a truth felt all too often during any given round of the great game.”

One merely need consider the muffed chip: “There is usually a deep silence after such a disastrous shot, a silence that almost resonates through the cosmos. The black hole of the flubbed chip, sucking all into its vortex. Beings light years away turn their heads toward that silence, noticing the faint gasp of pain uttered by its source.”

Altschuler is equally eloquent about the shank, but it’s not all bad news. He also reveals golf to be a game of elation, and suggests ways for the everyday golfer to approach a mental state more open to success than failure. 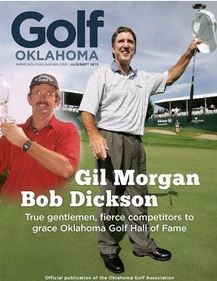 The book is more instructive than instruction, essays on being more aware, more present, less attached to the outcome of shots. It’s not necessarily material we haven’t seen before from other golf psychologists and counselors. But it is packed with plenty of examples from the author’s own travails and the trials and triumphs of touring pros, written in an engaging and anecdotal style. And for that, Altschuler earns the sound of two hands clapping.

This piece originally appeared in the August-September 2015 issue of Golf Oklahoma magazine, in slightly different form.