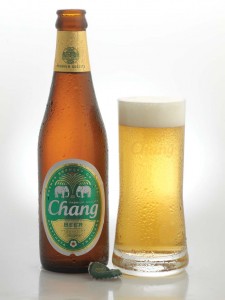 Think Thai beer, and my one and only thought once turned to Singha, a sturdy pale lager produced by the Boon Rawd Brewery in Bangkok since 1933, and usually battling it out with Kirin or Tsingtao in American Thai restaurants.

Singha’s rival, Chang, had flown completely under my radar since being introduced in the U.S. in late 2007. I didn’t know it existed, much less that it was available. Then I went to Thailand.

Back in the home country the two beers battle it out with each other. Singha usually scores on style and tradition points, but Chang outpaces it for value and alcoholic heft, clocking in at 6.4% ABV, pretty strong for a pale lager, especially if you’re pounding them in the ripping heat and ripe humidity of a Thai golf course.

I rarely drink during a round, unless I’ve already given up, but in Thailand gulping down the occasional Chang or Singha seemed just about essential for survival. 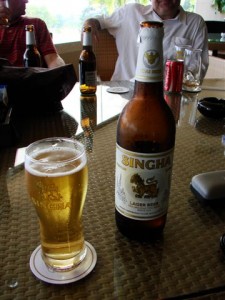 Singha has long been the best-known Thai beer

I played six rounds in Thailand, most of them at least partially in the mid-day sun, surely some sort of madness. Indeed, during one round at the Muang Kaew Golf Club in Bangkok I was feeling a little lightheaded. I was playing with Mark Siegel, managing director of Golfasian, which packages golf holidays in southeast Asia, and he suggested a bite of food at the next rest stop.

Rest stops are traditional about every three holes in Thailand. So applying a cool scented towel, while downing a few pork dim sum, a diet Coke and a Chang in quick succession, and I was soon ready to blast away again.

After a round in Thailand it’s difficult not to order the beer by the gallon, but Chang does have a kick. The Export version is a bit milder at 5% ABV, and that’s the version available in the U.S., though simply called Chang Beer. Chang means elephant, the country’s revered pachyderm. Which means this is the second week in a row we’ve featured a beer with an elephant on the label. 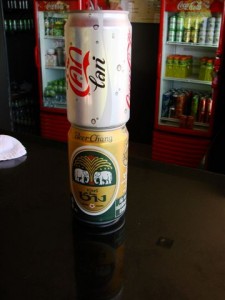 Double-barrel mid-round refreshment, a Coke and a Chang

As for character, it’s a brew that many beer geeks will disdain, but lovers of pale lagers could do worse–better a Chang than a Bud, Miller, Coors, etcetera and so on. There’s a mildly sweet nose and an almost citric tartness in the mouth and a crisp enough finish. I’d certainly be willing to order another in a Thai restaurant to fit the mood.

But ideally I’d opt for the 6.4% ABV version back in the Kingdom, out on the course when in need of a restorative and a good mouth-scrubbing, or at night, when sitting in bug-eyed amazement at one of the many fleshpots of Thailand.