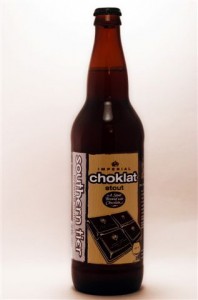 [Feb. 22, 2010] I should have cracked this one open last week for Valentine’s Day to go along with the rest of the chocolate suddenly floating around the house, since stout and chocolate are usually an inspired pairing. No matter, with a passel of snow predicted for the week ahead this may be just the fortification needed.

It’s the penultimate bottle of the birthday beers my brother picked out for me, from an eight-year-old brewery in rural western New York that is growing in size and influence. Southern Tier produces five year-round beers and a raft of seasonals and special bottlings–I counted thirty in the portfolio, including those in the Blackwater Series.

This has nothing to do with stealth military operations, and everything to do with Imperial Stouts, enough of a menu to dazzle Starbucks patrons–besides the Choklat Stout, there’s the Jah*va Coffee Stout, the Mokah (made with chocolate and coffee), the Crème Brûlée Milk Stout and the Oatmeal Stout, all upwards of 9% ABV.

The bottle I’m draining at the moment is an 11% whopper, which adds bittersweet Belgian chocolate to the mix of barley, caramel and chocolate malts and barley flakes, with Chinook and Willamette hops thrown into the kettle. 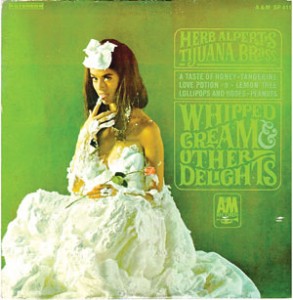 It’s not quite as opaque as a moonless night, with mahogany hues lapping at the edges, but the hot chocolate aroma suggests a blast of whipped cream or marshmallows might be in order for a topping. I’m tempted to try this beer heated up and poured over ice cream.

Stouts and Imperial stouts can suggest chocolate flavors without any actual chocolate used in the process, but in beers like this, or Young’s Double Chocolate Stout, there’s no subtlety involved, the chocolate is center stage, deservedly taking top billing. You either like this sort of thing or you don’t. I like it–from time to time.

Young’s is a far milder beer at 5.2% ABV, and it’s worth remembering that the Choklat is a big beer, since the aroma and sweet palate override its alcoholic warmth. We’ve already had enough headless snowmobilers in the news this winter. Keep this beer on the shelf until the day’s wintry activities are done, not about to begin. Put on the slippers, then begin sipping. 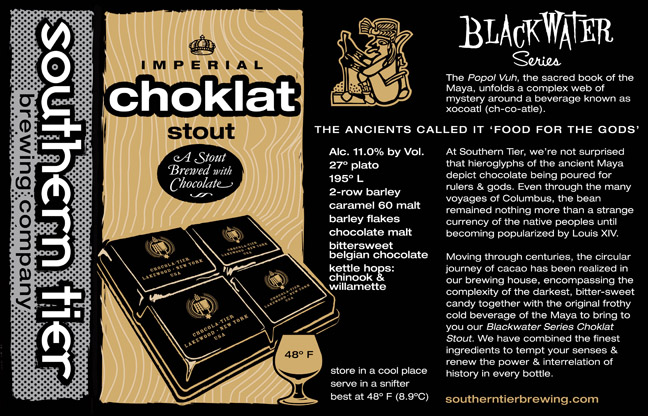