The first wave of family has arrived with more to come, so reports may become erratic or brief or both. But with Christmas Eve here, let’s get religious for a moment with a toast to the seventh century Irish monk Foylan or Foillan, which became Feuillien in the Wallonia region of Belgium.

Feuillien came to the area to preach the word, but ran afoul of the benighted in the Sonian Forest. His followers erected a chapel on the spot where he was murdered and decapitated, which became the Abbey of Prémontrés in 1125, but later became known as the Abbaye St-Feuillien du Roeulx.

The monks presumably brewed there from the early days, as monks did, but the modern brewing activity dates back to 1873 through four generations of the Friart family. Following some recapitalization in 2000 the Brasserie Friart became known as the Brasserie St. Feuillien, and some proceeds from sales still head the abbey’s way. 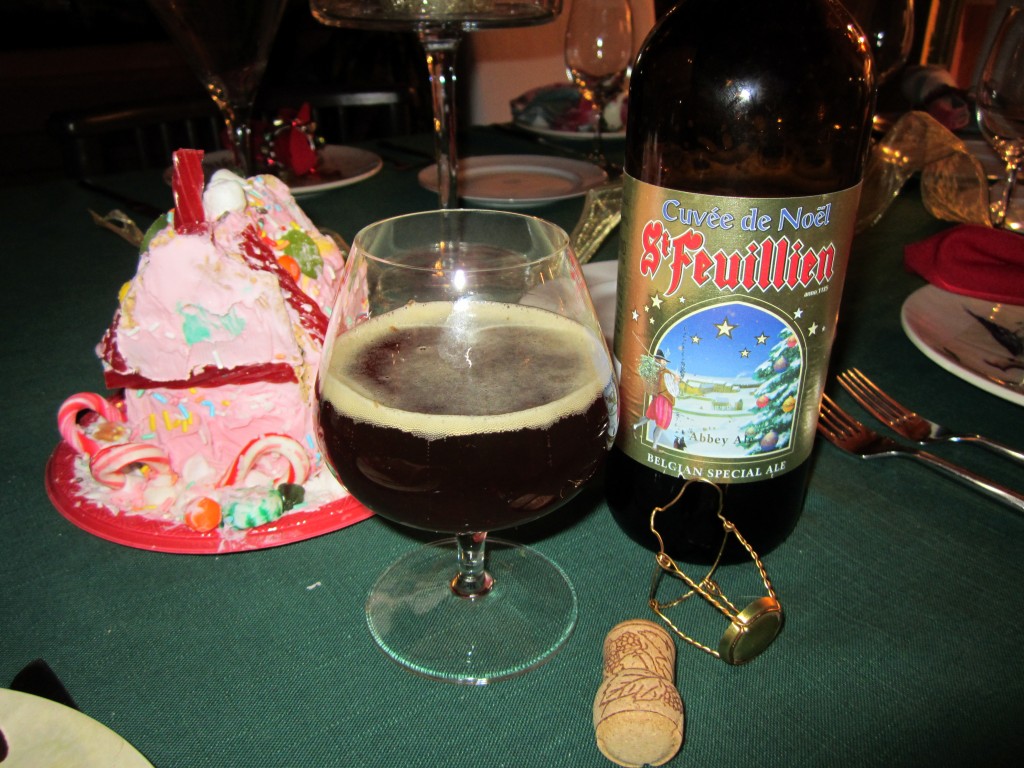 Artisanal Imports of Texas brings in the St. Feuillien line, and we’re all the better for it. The Triple and Saison are fairly familiar, and the brewery did two well-regarded collaborations with Green Flash Brewing of San Diego, the spiced Bière De L’Amitié, followed by Friendship Brew.

Well, the rest of the crew arrived (ten in all this Christmas), we finally cracked the Cuvée de Noël open before dinner, and among four of us the aroma and taste sensations were all over the map. I take it as a good thing, especially since everyone seemed to be enjoying it.

I did, and as the bottle level diminished, wished I’d bought another. There was a crop of yeast floaties in the glass by the time I’d poured the third, but it didn’t seem to infect the taste. The nose of this ruddy brown ale is a spiced fruit basket—orange, lemon, a hint of coconut, raisins—along with toffee, chocolate, vanilla. The slightly roasty taste is equally as stimulating, a swirling complexity of flavors that finishes with an appropriate bite and a light alcoholic burn. It’s enough to make you lose your head.

I finished a reading of Dickens’ “A Christmas Carol” today, so forgive the floridity. But dinner’s done, a grandchild’s gingerbread house unveiled, the tree trimmed, the young ones in bed. There are some presents still to be wrapped, others to scatter under the tree, stockings to be filled. The night may yet stretch on for quite some time ere the midnight chimes give way to Christmas.

This could well call for another refresher. But our work here is done until tomorrow. So a Merry Christmas to one and all–“…and so, as Tiny Tim observed, God bless us, Every one!”