Our penultimate Twelve Beers of Christmas choice looked good on paper—a beer with a name and label suggesting ugly Christmas sweaters, and laced—or rather knitted together—with spruce. So I set it aside when the brewery sent me the beers that, along with the ubiquitous Magic Hat No. 9, make up its Winterland Variety 12-Pak: Wooly, Heart of Darkness Stout, and Encore IPA.

I probably should have picked one of the others. Except No. 9, which I’ve never liked.

I’ve had a weird relationship with Magic Hat beers. I stopped buying them a long time ago after they stopped producing the Blind Faith IPA, the only beer they made I really enjoyed. The rest seemed bland, thin, highly underachieving and some, like the summer Wacko made with beet juice, downright hideous. There was some kind of house character that didn’t appeal to me, and the whole act seemed more about marketing its Deadhead sensibility than making exciting beer.

And that was before the company became part of the North American Breweries group, which as a whole seems even more driven by marketing and underachieving beers (if not sales).

On the plus side, the brewery was willing to push stylistic boundaries and experiment a little, even if I didn’t particularly care for the experiments. Then they started brewing Blind Faith again, part of a rotating IPA series which also seemed like a good idea. And now I notice, though have yet to try, a new Humdinger series of higher ABV seasonals.

So along came Wooly which is, as intimated in yesterday’s post, the lowest percentage ABV beer in our 12-day survey, coming in at 4.5%. That’s also on the low side for an ESB, but it would make the beer more drinkable in multiples if the spruce thing works for you, which it certainly might.

It’s a drinkable beer—not a Wacko—but it didn’t really work for me. To the pale, caramel and Munich malts the brewery went with Apollo and Northern Brewer hops before adding spruce flavoring toward the end of the boil. But the spruce dominates the aroma and flavor, without ever feeling fully integrated into a smooth whole as, say, Anchor’s Christmas Ale. 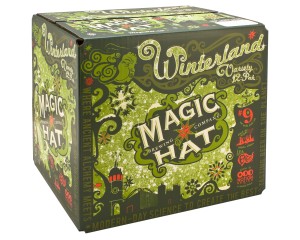 Stick with the other outliers of the Winterland Pak, the intriguing Encore, an American Wheat IPA (6.4% ABV), or the Heart of Darkness (5.7%), a nice roasty stout that we had at the tasting last night and which could work quite well in a winter warmer role.