At the midpoint of the 12 Beers of Christmas we took a hiatus yesterday, our day-long festivity of the 19th birthday of our grandson, Nate. As the young lad has spent all his Christmas days here, so he has spent almost all of his birthdays here, too, coming as it does two days later. 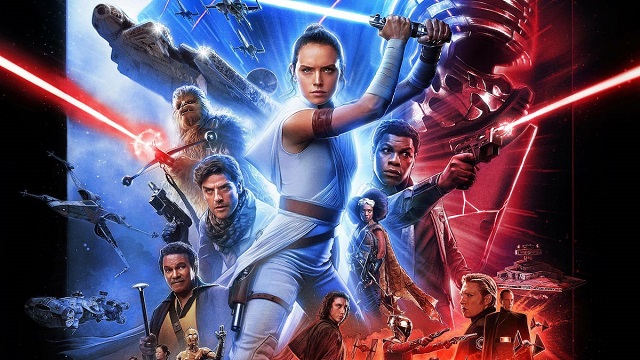 Every other year since 2015 we also managed to take in the latest installment of “Star Wars,” and so it was yesterday, too, with “The Rise of Skywalker.” This was Episode IX of the series that began (with Episode IV) in 1977, 23 years before Nate was born. He’s caught up since, and was able to fill in his father and me on the Episodes I-III we mostly missed, and while in his critic’s role said, “You didn’t miss anything.”

Well, it’s been a family affair all along. I took Nate’s dad—my son, Mike, to see “The Empire Strikes Back” (Episode 5) back in 1980 and we sat through it twice. Yesterday, even though we could pretty much see every plot turn coming, we all enjoyed the wrap. If we didn’t have to head home for Nate’s birthday dinner we just might have pondered a second viewing. Hey, an epoch doesn’t come to an end every day.

Nate’s visit, along with his two sisters and parents, did come to an end today, so it seemed like a good time to take to the couch and recover from the best Christmas ever. And sipping a couple of snifters of the 10% Tsjeeses Reserva should only have me sinking more deeply into the cushions.

The Struise Brewery of Oostvleteren, Belgium has made numerous versions of Tsjeeses. The regular starts out as a strong spiced blond ale matured for eight months on different stonefruit. There have been numerous barrel-aged vintages—in port barrels, cognac, gavignet. The most successful seem to be the bottles I have, aged in bourbon barrels. This particular vintage is 2014, bottled in 2016, opened in 2019. By now the beer is no longer blond, but if poured off leaving the yeast in the bottle a lovely clear reddish amber. 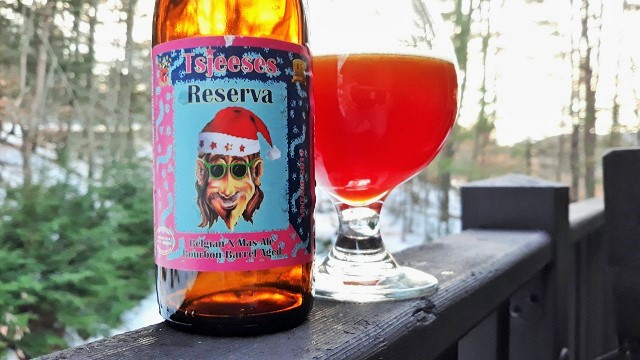 And it’s loaded with all sorts of aromas and flavors, all enticing, and just what I’d hope for from a Belgian winter ale. Both my wife and I picked up a prune note in the nose amidst the strong toffee character and some alcoholic heat. The palate is sweet, the mouthfeel huge, with flavors of brown sugar, licorice, oak to be sure. Spices, not so much; they would appear to have been overpowered in the process, not that they’re really missed.

There’s little noticeable hop presence here, no big surprise, but there’s a pleasing tannic ping and alcohol bite in the finish. This is one to linger over, to be sure. That should give you time to contemplate the label art, which looks like a hipster Jesus wearing sunglasses and sporting a Santa cap. But the brewery website is worth quoting in this regard:

“… Tsjeeses was born out of a 5 year brewing experience regarding x-mas beer without being capable of finding a suitable name all that time. With the name came a face, a caricature actually, that was drawn on the day Urbain, our brewing slave, drank too many Tsjeeses’s. Every time he drinks one, he says ‘Tsjeeses, what a beer.’ Therefore the name is more an expression of stupefaction than a curse. We have had already many discussions around the pronunciation of ‘Tsjeeses.’ Very close would be that you say ‘cheeses’ or cheese in plural.”

“Struise” means “sturdy” and the brewery proudly strides along accordingly, having just opened its own brewery in Oostvleteren that will be part of the brewery trip mounted next year by the U.S. importer Shelton Brothers. But “Struise” is also Flemish slang for “ostrich” and indeed the brewery started back in 2001 in a small barn at an ostrich farm. It still proudly bears an ostrich as part of its logo. 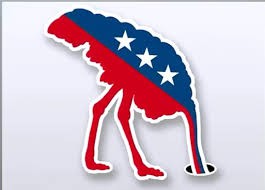 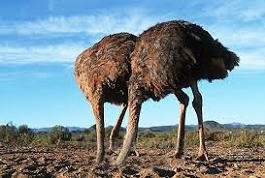 Not that the brewery gang would know what I’m talking about, but clearly the willfully blind GOP should immediately adopt Struise as their official brewery. Indeed, now into my second bottle I’m starting to feel a little like Jeff Sessions: “Lordy, I do declare sir, I believe I have the vapors!”

Or maybe I’m just drifting off into a long time ago in a galaxy far, far away….