How often do you get haiku with your beer? And haiku from that beer’s brewer to boot, right on the label?

Add a bottle of El Triunfo to the stash and there you have it, seventeen syllables from Harpoon brewer Jesse Brenneman:

The coffee porter
A blend of “brews”, in balance
Keeps an even keel

Since school has started up again, let’s explicate, overlooking the misplaced comma. Beyond the obvious reference to the type of beer, there’s allusion here to the great mode of transporting goods, shipping, both in terms of the “even keel” and of the porters who carried the cargo off the ships.

It was the river porters, or Fellowship porters, who shouldered the loads from the ships docked in the Thames in London in the eighteenth century, when the beer called porter was acquiring its name. And among the cargoes were those essential ingredients for “brews”—sacks of grain for beers, sacks of beans for coffee, both found in this particular porter.

And this particular porter is the 44th entry in Harpoon’s 100 Barrel Series. Coincidence that our newly reelected U.S. President, whose second inaugural takes place in two weeks, is the 44th?

We already know President Obama is a beer drinker, and there are those among us who actually believe he is trying to strike a political balance in the halls of power, in hopes of keeping the country on an even keel.

Or perhaps even the world; the coffee used in the beer is from the fair trade Equal Exchange organization, specifically from the mountainous El Triunfo biosphere in Mexico. 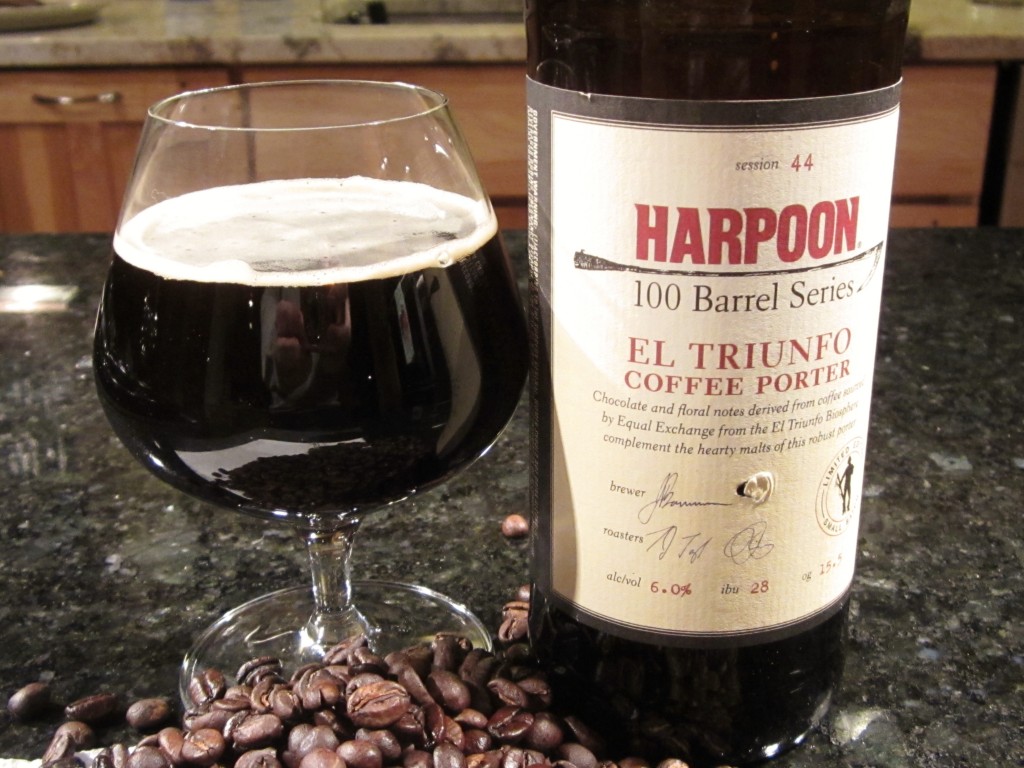 Granted, all this may be reading a bit too much into three lines of verse, which admittedly won’t go down in the annals of great poetry. Brenneman is no Basho.

But he is good brewer, and it is a pleasure to note that the beer goes down just fine. According to Brenneman a variety of coffees were tasted and tried before settling on the El Triunfo: “We wanted the coffee to be very present in the profile, but we also wanted to make sure it tasted like a beer; we didn’t want to overwhelm one or the other in either direction.”

There is a nice balance here–the malt bill of chocolate and caramel malts makes for a sweet and ingratiating porter, but there’s no doubt about the coffee, since 3,600 pounds of roasted beans were used to make a concentrate of 550 gallons blended into the beer during filtration. Tea drinkers need not apply.

Well, maybe strong tea drinkers; although I think the beer thins out a bit in the middle, it’s still a bracing quaff at 6% ABV. With licorice and chocolate notes along with the java, it’s the easy-drinking brew Brenneman appears to have been aiming for.

And in a final grace note, the farmers who grew the coffee beans used in the brewing are planning to visit the Equal Exchange offices in Boston in April. They’re not visiting specifically to drink the beer, though drink the beer they will. Strikes me about as even as keels ever get. [Jan. 7, 2013]