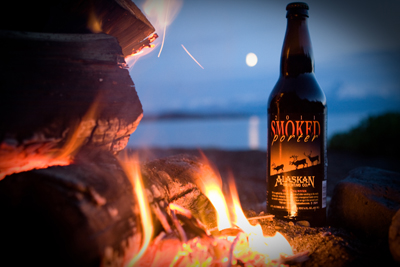 The smell of woodsmoke….

This was one of Michael Jackson’s favorite beers. Who am I to disagree?

Happily, I don’t. Like Jackson, I have a little history with the beer, though I wasn’t helicoptered out to an Alaskan ice field by the owners as he was, to affirm the late British beer writer’s theory that the brew would go well with lox and bagels.

Actually, I probably learned about the beer from Jackson, as I learned about most new or odd beers in those days–those days being 1986, when the Alaskan Brewing Company began, or 1988, when the Smoked Porter was first introduced as Alaskan Seasonal. It still is that, if the name has changed and now reappears in what, by my count, is the 25th iteration.

Anyone sitting on a complete series, beyond brewery founders Geoff and Marcy Larson, is sitting on a gold mine (which is where Geoff Larson worked before starting the brewery). Vertical tastings of the Smoked Porter are much to be desired and usually a feature at the annual Great American Beer Festival, where the beer has racked up more award medals than any other single brew.

The recipe is the same from year to year, but the character of the beer can evince real changes over time thanks to the vagaries of smoking the malt. Larson says they’ve yet to find an end date for the beer’s shelf life—at least since 1993, when they began leaving some yeast in the bottle. It’s said that the smoky quality of the beer fades after three or four years, allowing some of the dark fruit or port-like character to move to the forefront–only to have the smoke reemerge in subsequent years.

I wouldn’t know. I did find these two (empty) bottles on the shelf, and I think I may have had them side-by-side with a 1995 vintage as well. But damned if I can find those tasting notes. 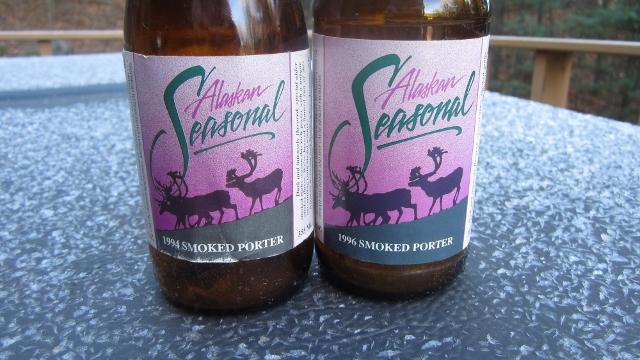 Vintages of the Smoked Porter, called Alaskan Seasonal in those days

I suspect the first smoked beer I had was the Aecht Schlenkerla Rauchbier Märzen, no doubt also led that way by Jackson. In his regularly revised Pocket Guide to Beer series, where he gave one to four-star ratings, he steadily gave both the Bamberg and Alaskan smoked beers the rare four stars, denoting a World Classic. I dutifully sought them out early on, and have never lost the taste for them.

Bamberg is well-known for its smoked beers, but not by Geoff Larson when the idea for the smoked porter arose. He was just enjoying the smoked salmon from his friend’s smokehouse across the street from the brewery. And the malt for the beer has been smoked with alder wood on that same equipment ever since. 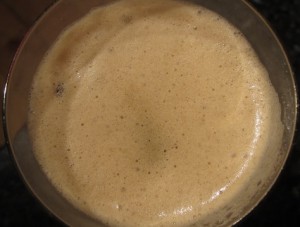 Just a proportion, mind you. The great thing about the Alaskan Smoked Porter is that it’s not only about wood smoke. Oh, it’s readily evident in both nose and palate, and one is either going to like the beer or not depending. But it’s not an overpowering quality, since it’s swimming around in a sturdy but smooth black porter, rich with those plummy fruit flavors, caramel and coffee, and well-bittered by way of support.

It may be too much for the faint-hearted, but there’s nothing too jagged or edgy to deal with here. It is a great late night, cold weather brew. It should be terrific with a cigar, but I tried that tonight, and seemed to lose the smokiness of the beer for a while. I blame the cigar.

I simply don’t remember if I made off with a few bottles of the Smoked Porter after visiting the brewery in 2000. Possibly not, since it was July. But then again that may be when I came home with the 1994-96 vintages. As I continue the Herculean task of cleaning my office (less aromatic, at least, than the Augean stables), I confess I can’t find the notes from that visit, either. 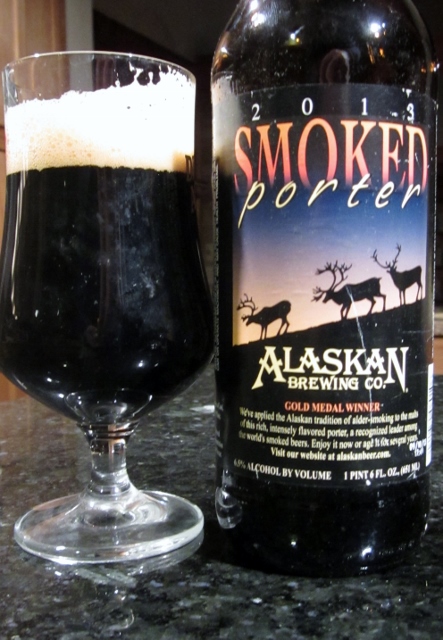 2013 vintage of the Alaskan Smoked Porter

I remember we drank some that day, however, and that it was an exciting, agreeable and extensive tour. (The brewery is now the 16th largest U.S. craft brewing company, based on Brewers Association 2012 sales volume statistics.) The details are hazy partially because the whole day had been packed with emotion.

I was in the midst of an Alaskan cruise with my brother, sister and our spouses. My parents were meant to be on it with us, but both passed away earlier in the year. We had just scattered their ashes over the side of the ship the day before.

I wrote this up in a piece for Travel & Leisure Golf that I’ll post here before too long (if I can find that). But the next morning my brother and I played golf at the nine-hole course in Juneau, where he fairly promptly notched a hole-in-one. It was all a little much for us. The tour probably served best to get some beer into our systems to settle us down.

I’ve since called the Smoked Porter I had that day at the brewery the best beer I ever had. And I see no reason to change my mind now.

5 Responses to “TAP Beer of the Week: Alaskan Smoked Porter 2013”