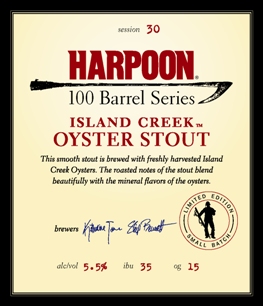 The brewery can be so prolific because it is really two breweries, the original Boston plant that opened in 1987, and the Windsor, Vermont plant it purchased in 2000 from the expired Catamount.

It was a sad day for Vermonters when Catamount went belly-up; it was one of the earliest and best of the New England craft breweries.  Many of us still pine for a Catamount Porter. Harpoon made what seemed like a half-hearted attempt to keep the Catamount name alive for awhile.  But it was a candle in the wind. 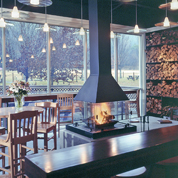 That said, Harpoon is now into its third decade, making it one of the venerable ancients of the craft brewing world.  With the Windsor plant, locals pretty much consider it a Vermont brewery now, particularly with the Harpoon Riverbend Taps and Beer Garden on hand, adding a brewpub-like menu and atmosphere onto a brewery visit. 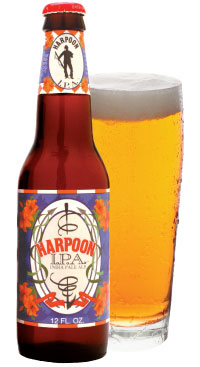 Harpoon is our penultimate featured brewer leading up to the May 22 Brattleboro Brewers Festival.  It will certainly be pouring the flagship beer, Harpoon IPA, a real go-to selection that often saves the day (or night) whenever other beer choices are limited (a slot once likely to be reserved for Sam Adams Boston Lager).  It’s a solid Cascade hop-accented IPA, not too far over the top, easy to find and a pleasure to drink.

But why stop there with so much choice?  Harpoon’s other beers fall into a variety of categories–UFOs (Unfiltered Offerings), seasonals, and two limited edition series, the Leviathans and the 100-Barrel beers.

I’ve been dipping into each category, a little promiscuous myself.  The UFO Pale Ale has been available since September and is about to vanish, more’s the pity, but it shall return.

The Leviathan series is self-evidently about big beers, all upwards of 9% ABV, in 12-ounce bottle four packs.  The Imperial IPA comes in at 10% ABV and reaches 122 IBUs with its massive Amarillo, Chinook, Centennial and Simcoe hopping.  Wisely, the company has made this a year-round offering. 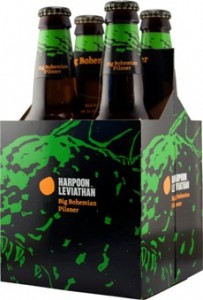 The Big Bohemian Pilsner is just out and will probably be poured at the Festival.  It’s a tasty beer, with a grassy nose, a pleasing hops and malt blend, a bit metallic and harsh on the palette, with a lingering sweetness giving way to alcoholic warmth.

It’s hard to know exactly what Harpoon was aiming at here–or, for that matter, any brewer putting out an Imperial Pilsner, something of an ersatz style.  The beer is strong enough for an Eisbock, and reminiscent of a strong golden Belgian ale.  But it’s a lager, of course, loaded as a Bohemian Pilsner should be with Czech Saaz hops.  But the hops are less evident than the viscous malt profile.  Tasty, as I say, but puzzling in the same sense as a remake of a classic movie–why go to all the trouble?

On the other hand, going to the trouble seems the key to the 100-Barrel Series, wherein every couple of months Harpoon gives its brewers a free hand to dream up, develop and brew a 100 barrels-worth creation.  The brewer’s signature is on the label, the beer lasts as long as it lasts, and then it’s on to the next one.

The program began in May 2003 with an Oatmeal Stout that lasted three months, and has since plowed through some mighty interesting beers on its way to the 31st iteration, not that I’ve had them all: I’ve learned, once I see one, not to wait until my next trip to the store to buy it; it may well no longer be there.  Mighty sorry I missed Session 29, a Ginger Wheat.

But I did enjoy Session 30, the Island Creek Oyster Stout.  Dry stouts are classic accompaniments to oysters, which is certainly the idea behind the Oyster Stout from Marston’s in England, the only one I believe I’d ever had up until now.  There are no oysters in Marston’s Oyster Stout; it’s less an ingredient and more a suggestion.  (There was no question in the oyster shooter I once had–which was a raw oyster floating in a glass of Guinness.)

But in Katie Tame’s Harpoon version, several hundred Duxbury Bay oysters from the Island Creek Oysters farm were shucked and added right to the brewpot. Katie’s theory was that oysters would add some protein to the beer and hence a bit more head retention. Other brewers on the bandwagon have been throwing in whole shells or just the shells, which would probably assist in fining. No one seems to be mentioning the potential aphrodisiacal qualities of the style. 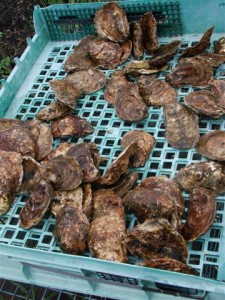 From further afield in Toronto, England, Ireland and New Zealand come Patrick’s Oyster Stout, Gadds’ Black Pearl Oyster Stout, Porterhouse Oyster Stout and Three Boys Oyster Stout.  Presumably these are only some of the oyster stouts in the brewing seas, and I’ve even heard of one mussel stout from Australia.

Mussels I like.  I’ll slide a raw oyster down now and again, but I’m no great fan.  Depends how much nerve is mustered at the moment for gulping down a grayish, wet, phlegmatic blob. The odds improve if I have a stout in hand.

The combined packaging of Harpoon’s offering requires no nerve whatsoever.  It’s a pleasing stout with a toasty brown head indeed, opaque in the glass, with a roasted malt, coffee and chocolate nose and flavor, though hardly overpowering in any way.  There’s an unmistakable mineral note that one is naturally tempted to call briny.  So I’ll call it briny.  But in truth, the oysters in most oyster stouts are virtually undetectable. 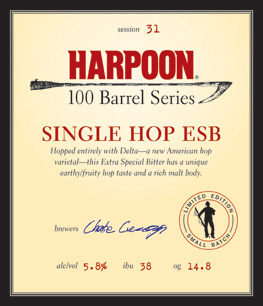 The 31st 100-Barrel entry is the Single Hop ESB brewed by Charlie Cummings, and in its own way as adventurous as an oyster stout, since the hop is Delta, never before used in a commercial beer according to Harpoon.  A new strain from Hopsteiner, Delta is said to be a cross between Fuggle and Cascade.

My guess is that the Fuggle qualities dominate, since the aroma is more woody and piney than citrusy.  The aroma hops are backed up by a firm malt character, but the initial flavor impression is of a sharp hop bite.

The beer tended to thin out when I first served it, too chilled.  Letting this one warm up a few degrees decidedly brings the beer to greater life, releasing more aromatics and malt character.   Still, it’s not a beer that will knock anyone over, and would probably serve well as a flavorful refresher on a warm day, not that we’ve had too many of those in Vermont of late.

Anyone reading this before May 12 can go to the Harpoon website at noon (EDT) to hear some live chat about the beer with the brewer and Michael Sutton of Hopsteiner.  Otherwise, just drink the beer, while there’s still time. [May 10, 2010]