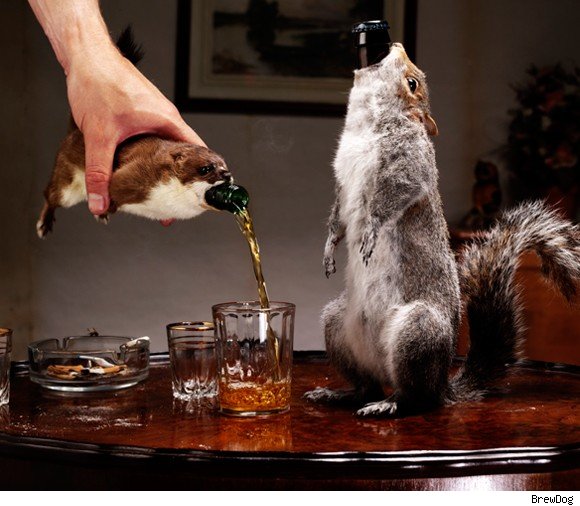 Rest easy, Scotland.  In the high alcohol arms race that has been brewing between BrewDog in Scotland and Schorschbräu in Germany (see my previous post and comments here), the irreverent Scots have responded, and have seemingly reached the end of the road in their experimentation with sky-high ABV beers. BrewDog has produced 12 bottles of a 55% ABV beer costing £500 each and wrapped in dead animal skins: The End of History.

It doesn’t appear to be a joke, as the brewers suggest at the BrewDog website (brewdog.com) that the beer is a blond Belgian ale infused with nettles and juniper berries.

Yet they display it all jokingly. As the website says, each bottle “…comes with its own certificate and is presented in a stuffed stoat or grey squirrel. The striking packaging was created by a very talented taxidermist and all the animals used were road kill.”

This has already set off criticism from animal rights groups in Scotland, and comes on the heels of a BBC News report that Scots drink 25% more alcohol than other Brits.

No word from Germany yet.

3 Responses to “The End of the Beer World As We Know It, Part I: The Arms Race”