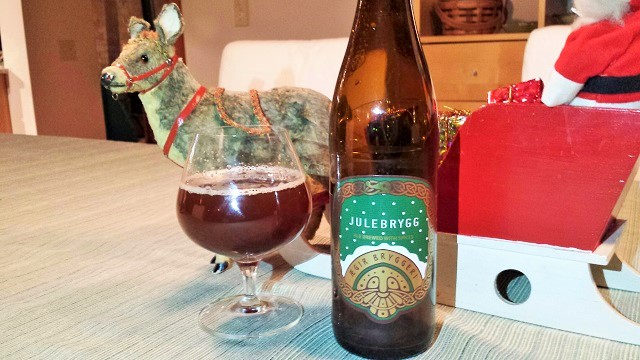 If yesterday’s brew was a bit of a misstep, today’s is a great leap forward. One reason I delve into 12 Beers of Christmas madness is to learn about new beers and breweries. It’s a double payoff when the discoveries include elegant beers like the Julebrygg of the Ægir Bryggeri of Flåm, Norway.

I hadn’t had a Norwegian beer since 2012, when I included the Nogne Ø Winter Ale in the first 12 Beers of Christmas go-round. Now I have another coming up in a few days from Haandbryggeriet in Drammen. Well, Skål! 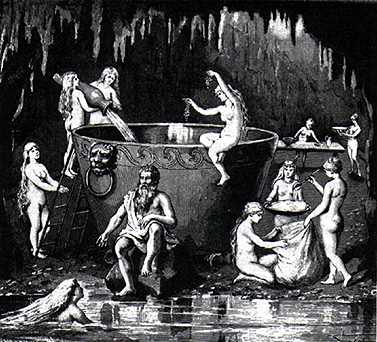 Ægir and his daughters brewing beer for the Norse Gods

Ægir or Aegir is the mythological Norse ruler of the sea, and the host of annual beer bash for the gods, held underwater so the normally pugnacious deities couldn’t fight with one another. No less a beer critic than Odin claimed that Ægir’s beers, brewed in pots said to be a mile wide and a mile deep, couldn’t be equaled in all of the Nine Worlds.

It’s hard to say which of the nine Flåm is in, but it does look a little otherworldly, not to mention absurdly scenic. A little over 200 miles from Oslo, in the southwest fjord-laden part of Norway, it’s been a tourist destination since the late 19th century.

Aud Melås, a native Norwegian from Leikanger and her husband, Evan Lewis from Rochester, New York, have been turning this fairytale land into a modern myth since shortly after moving here from California in 2004. Aud worked in the tourist trade while Evan finished his brewing studies. In 2007 they opened the Ægir Bryggeri brewpub with its Viking-inspired design, and they’ve consistently added on from there. In a town with fewer than 400 residents, but close to a half million visitors each year, the couple now runs the Flåmsbrygga Hotel, a production brewery, a restaurant, a cafe, and now a distillery as well. 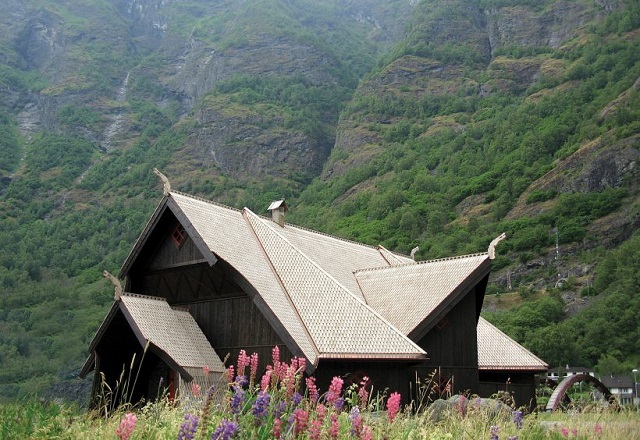 If the other endeavors are as good as this beer, the couple has a brilliant future. This is apparently a stronger version of a red label Christmas beer that came in at 4.7% ABV. At 7% it might fit into a Belgian dubbel style, but in beer equivalents it reminded me of barleywines like Sierra Nevada Bigfoot or Anchor Old Foghorn, though both of those California classics are upwards of 9%.

Which is to say the Julebrygg is packing in a lot of flavor. It pours a hazy brown, with a thin and quickly dissipating head. But it has a most appealing nose—caramel, brown sugar, cinnamon, some clove. The spicing is fairly light in the palate, emphasizing the bready malt character with some mild chocolate notes, a full and velvety mouthfeel and a teeth-coating finish.

I loved every sip of it. The slightly more than a pint bottle seemed gone all too soon, when I might have wished for one that was a mile wide and a mile deep.

Name: Julebrygg
Brewer: Ægir Bryggeri, Flåm, Norway
Style: Strong ale, winter warmer
ABV: 7%
Availability: Seasonally. Imported by Shelton Brothers Inc., which distributes to 27 states and Washington D.C. Check their “Locate Our Products” list to see if the beer might be near you.
For More Information: http://flamsbrygga.no/en