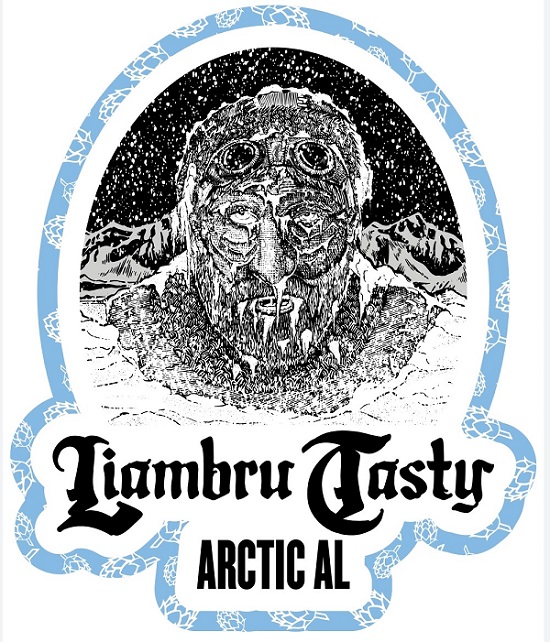 I called the number for the Liambru Tasty brewery–about an hour and a half north of here–after six this evening. This being Vermont, Amy Ridlon, the owner with her husband, Josh, answered. We had a grand old chin wag and she told me a little about the brewery, which I’ve yet to visit.

Not that there is that much to visit as yet. The couple started the brewery in their two-car garage in Proctor, producing their first batch in January, 2019. To date they’ve brewed four IPAs and now Arctic Al. Plans to open a tasting room were put on hold by the pandemic, which Amy actually considers a bit of luck: “We were new enough that we were at a point that we were not terribly affected; we were able to just continue on.”

Still, what started out as a 3.5 barrel system fairly quickly grew to a seven-barrel brewery. Josh, a carpenter, did all the brewing and label conceptualizing (the wild label art work done by his friend, artist Matt Marro) while Amy, a school nurse, distributed the brews after work. But once the couple signed on with a distributor, demand was even greater, and they started contract brewing at the Rutland Beer Works. Plans to expand the brewery and open a tasting room are merely postponed.

“I’ve been a craft beer fan since before it was craft beer, before it was a thing,” Amy said. She’s pretty sure she’s the one who talked Josh into brewing. As for Arctic Al, “Porter is one my favorite styles, and we thought a coffee porter would be a great winter beer.” 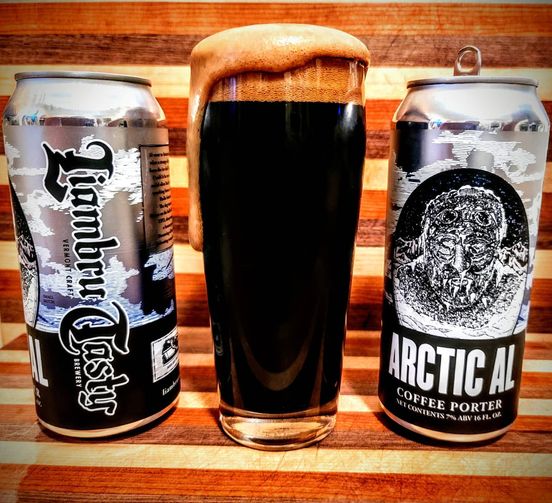 No argument here. The Arctic Al is a study porter with a copious brown head and an unmistakable coffee scent. The couple was planning to use a Vermont coffee in the brew until they got to sniffing around in Price Chopper and were olifactorily seduced by a blend from the SF Bay Coffee company.

The coffee follows through immediately and prominently on the palate, yet not overpowering the appeal of the dark malts, a problem with a lot of the coffee-accented beers I’ve had. (The Map 40 from Allagash a notable exception.)  But Arctic Al balances seamlessly, really, smooth, with hints of chocolate, one of the better coffee brews I’ve had. Well, other than coffee. 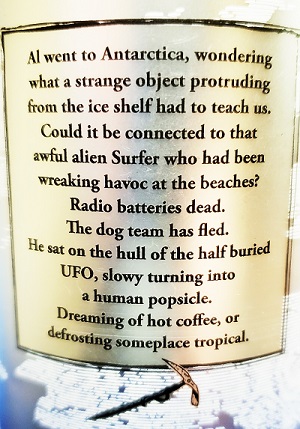 The beer fares better than Arctic Al himself, who on the label looks as though he’s taken the last icy page from Jack Nicholson in “The Shining.” Amy said Josh and Matt Marro would speak on the phone about the label art (“…sometimes for hours”) and then sooner or later some artwork would arrive, propelling Josh to write up some label prose, as shown.

Deconstructionists take note that Josh’s father and grandfather are named Al. His middle name is Al.

I merely told Amy that I was enjoying the beer and that I’d try to finish off today’s entry before I fell asleep.

She sagely noted, “Then you’d better not have another one.”

It occurred to me, since I won’t be sharing any of my beers this year, that maybe I should lay out the list in case anyone wanted to rush out to their better beer store to stock up and join me in the tastings.

It may take the thrill out of the daily reveal but I’m sure I’ll find something else to blab about. Let’s give it a try. Here’s the rest of the list so far, not necessarily in this order:
Fantome Hiver
Glazen Toren Canaster Winterscotch
Einbecker Winter Bock
Four Quarters Buffalo Plaid
Straffe Hendrick Xmas Blend
Prairie Artisan Seasick Crocodile
Pipeworks Rudolph vs. Unicorn

Open as always to suggestion or strongly worded opinion.