Since we tried a Belgian-style Scotch ale from the U.S. last week, I thought it might be fun to just go for a Belgian Scotch ale this time out. But now that I ponder the nomenclature, maybe this beer from the province of Hainaut in Belgium should really be called a Scotch-style Belgian ale.

I responded to a comment on last week’s post that Belgian Scotch Ales may be more of an interpretation of a style than a style in itself, but there are enough of them (Gordon Scotch Ale or McChouffe–“the Scotch of the Ardennes” from La Chouffe) to make one wonder.

Historically, ales from Scotland have tended to have higher malt and lower hop profiles than English ales, one argument being that it’s colder in Scotland, so a more warming beer fits the bill. Another argument is agricultural–that as styles emerged there were ample hops in England and plenty of malt in Scotland, so there you have it. (It’s surely more complicated than that, but we’ll let beer historians wrangle over it.)

The varied strengths of Scottish beers were priced accordingly–60/, 70/ 80/ ales, an ale going for 90 shillings likely to be a whopper called a Wee Heavy, coming in somewhere between 7% to 10% ABV.

There has long been trade between Scotland and Flanders, but Hainaut is in western Wallonia, the French-speaking part of Belgium, although but a few miles south of the Flemish border.

But according to the Van der Haegen family, which has been brewing in Silly since 1850, the Scotch ale was decidedly Scots-inspired. A Scottish regiment was based in the town after World War I, and requested a beer be brewed that would be to the soldiers’ liking. After many back and forth tasting sessions, a recipe using Kent hops was born in 1919. 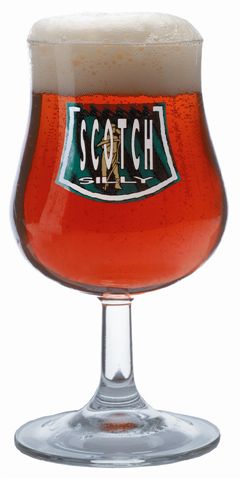 That’s the same basic recipe being used today, with some sugars added to prompt a secondary fermentation in bottle or keg, meaning the beer could stand up well to some aging.

Certainly, Scotch Silly (sometimes called Scotch de Silly), is a worthy representative of a Belgian Scotch Ale or any Scotch ale–although perhaps we should call it Belgian Wee Heavy de Silly, even if it has marginally less body than last week’s Reunion ’10 beer, which also seemed a tad sweeter.

Mahogany in color, with a mild tan head, Scotch Silly has an estery toffee nose amidst the alcoholic vapors, a coating mouth feel, a bracing malt sweetness but a drying bite and what seems to me to the slightest touch of peaty smokiness. But that might have been some of my cigar residue.

This is a good beer to pair with a cigar–sturdy and warming, one that might well be best suited for days cooler than mid-July. Still, that I had but one 11.2-oz. bottle seemed like the only silly thing surrounding the entire enterprise.