[May 5, 2017]–The Session is a monthly effort where beer writers around the interwebs respond to a topic question each first Friday. This is the 123rd installment, so it’s been going on for quite a while.

Josh Weikert posed this month’s title question above, with the usual great latitude for how anyone answers. Responses can be found here at Josh’s website, Beer Simple.

Learned beer journals have run articles on the question, and the Session answers I’ve already peeked at suggest that the topic runs in myriad possible directions. I touched on some of it myself back at The Session #86 on beer journalism.

In other words, the subject is huge, and reminds me of a quote from Saul Bellow’s Henderson the Rain King:

What’s the universe? Big. And what are we? Little. I therefore might as well be at home where my wife loves me.

So rather than be like the chap who, when asked for the time, gives the history of Switzerland, I’ll confine myself to two small personal examples, one from last night, and one yet to come.

Last night was #beerchat night on Twitter, as is every Thursday at 9 pm ET. Anyone is welcome to eavesdrop or join in each week simply by using the hashtag on Twitter. A moderator (in this case a splendid fellow I happen to know who goes by @HopSnobbery), asks about four or five beer-related questions, and whoever is hanging around can let fly for the next hour.

If the commentary sometimes becomes barbed the immediate community is usually quite civil, not something one can always say about the Twitterscape or the internet in general (which is why Josh’s query is certainly a valid one). The #beerchat hour passes by enjoyably, no doubt with beers nearby for everyone, and then the big universe rolls on.

(We used to roll on to a #beerchatafterdark hour, but everyone was required to take their pants off for that one, not that anyone was really checking.)

Last night we were #beerchatting about the recent brewery acquisitions, Wicked Weed by A-B InBev and Lagunitas by Heineken. Elsewhere on the web such news was met with horror, execration, earnest discussion, some viciousness, some congratulations, some imminent calls for boycotts. Our group certainly pondered whether one would any longer buy any beer from these producers. (Responses were mixed.)

As @HopSnobbery summed it up,

to which I felt compelled to add,

I meant “drinkers” of course, but the thing is that—subject completely aside—here was a bunch of beer fans from God knows where (could be from anywhere on the planet), most of us total strangers to one another except through social media, having our little conversation about beer. No big deal–except when I think that not too terribly long ago this kind of thing would have been considered little short of miraculous.

I’m not sure I’d call it helpful or hurtful, but it’s certainly interesting and fun, and a lot better than another rerun of “The Big Bang Theory.”

Over the next couple of weeks I’m going to be in a number of airports, having a bit of time between connections. The chances are much better than they used to be that there are decent beers to be found at the airport. And the ability to find them is easier than it used to be, too, thanks to apps like Untappd.

Say you what you like about such apps, where one can log and rate all the beers you have, or want on wish lists. And I know plenty of brewers who are not fond of the rating aspect of them. But whereas I once might have traveled down to a likely looking restaurant on Concourse D only to find out all the beer was bellywash, now I can actually see where some decent beers are being poured before I start wheeling my carry-on around. 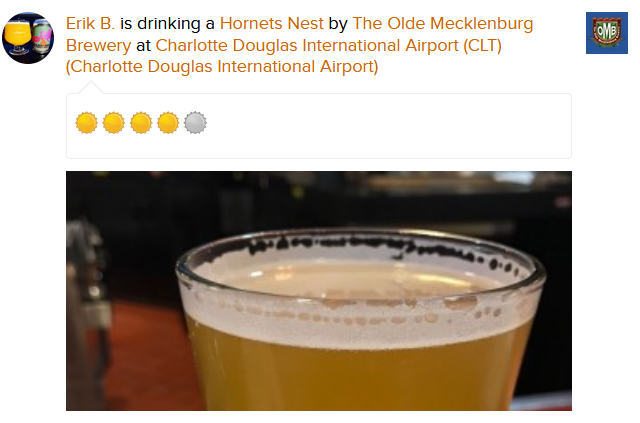 Heck, I might even see that another Untappd user is downing one right at that moment, and that soon we’ll be tipping one together and all thanks to the cyber world of beer I will have made a new friend.

Until I find out he voted for Trump, of course. Then I’m going to trash him on Twitter.