We’ve turned the corner: the days are growing longer. True, it’s still dark at 4:30, but not for much longer. In the meantime we have the winter seasonal from Hermit Thrush Brewing in Brattleboro, Vermont to help the minutes tick by. 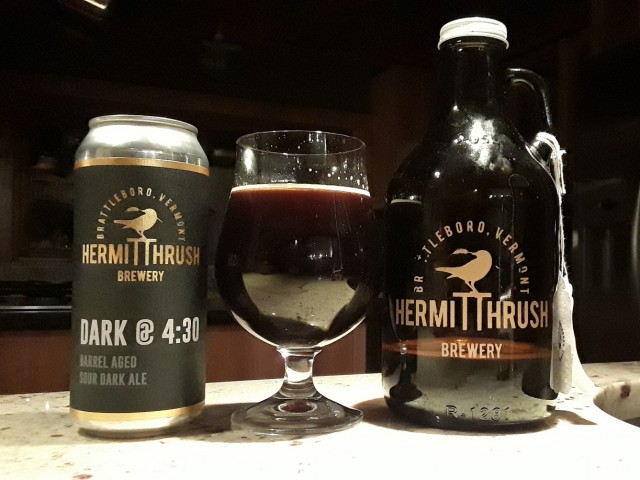 Officially, sundown was 4:19 yesterday, the shortest day of the year. Today it was 4:20. If that’s not worth a celebrating, what is?

I was out most of the afternoon doing Christmas related-chores and shopping, battling a lot of traffic and trying to get home before 4:20. I failed, but since I had stopped at Hermit Thrush to bring home a 32-oz growler (or howler if you prefer) of Dark at 4:30, I was not perturbed.

I was concerned I was going a little hyper-local with this pick, but when I ran into Hermit Thrush president and brewer Christophe Gagné last week he told me the Hermit Thrush beers were now in eight states. So it’s only northeast local.

Four years ago, when I wrote about Hermit Thrush’s opening, I wondered if there would be an audience for the Belgian-inspired sour brews that the brewery was producing. Gagné, then as now, was confident that if he brewed it, they would drink. And he’s been right. The brewery has grown faster than Gagné (below) and partner Avery Schwenk expected, particularly after canning began. The pair have already filled another building near Brattleboro with additional barrels and foeders to store and condition future offerings. Eight states and counting. 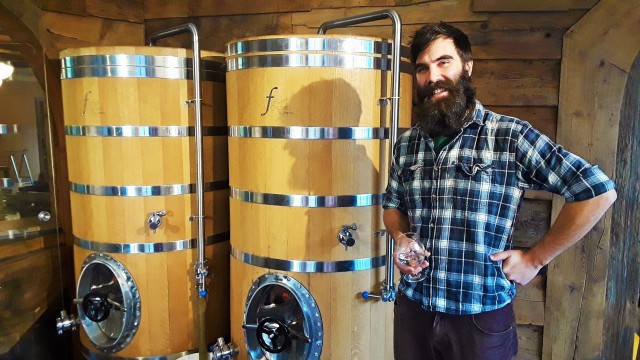 Not everyone is a fan of sour beers, of course. I think my favorite naysayer was a contributor to TripAdvisor, who headed a review of a 2015 visit to Hermit Thrush with, “I’d rather drink my own urine!” Well, you can’t please all the people all the time. But for fans of sour beers, Hermit Thrush is singing right on key. 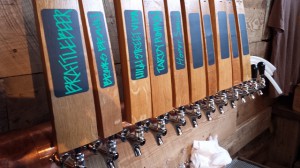 I wish I’d asked Gagné more about Dark at 4:30 at the time. But at the tasting room today Joan Bulzacchelli noted, while filling my growler, that the Belgian-style dark ale is fermented with one of the brewery’s local house yeasts, aged in red wine barrels, which gave off what she thought were some dark berry notes, with chocolate undertones.

The beer has been around for other winters, and while the website pegs it at 6.2% ABV, Joan wrote 7% on my growler tag. I brought home a can as well, and that says 6.5%. Take your pick. In any case, it has some deceptive heft, since there’s nothing that seems heavy about the beer. It pours out with a wild effervescence and a lively tan head, which quickly dissipates. And it’s as dark as 4:30. But held up to the light the beer appears to have picked up some reddish brown color from those wine barrels.

The bouquet is both malty and wildly fruity. My wife discerned the malt, I detected cherries or cranberries. Once I mentioned fruit she said, “Maybe a sloe plum,” which pretty much blew my mind. She could be right. The beer is said to be blended from 14 different malts, so it’s quite a heady mix of aromas, and the flavors swirl together similarly with an amazingly tart and vinous puckering bite.

If you’re like Mr. TripAdvisor it might be best to steer clear. Sour fans, or those adventurous enough to try a wildly distinctive beer, should track this one down to brighten up the day.